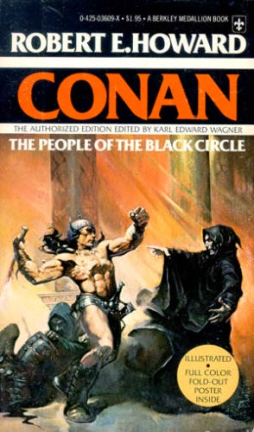 Howard Andrew Jones and Bill Ward kick off their re-read of The Bloody Crown of Conan by Robert E. Howard, the second of three omnibus volumes collecting the complete tales of Conan, with perhaps my favorite Conan tale, the 80-page novella “The People of the Black Circle.” It was originally published in three parts in the September, October and November 1934 issues of Weird Tales.

Bill: It’s easy to see why “The People of the Black Circle” is a Conan fan-favorite: plot-twists and action galore, great supporting characters, an exotic but plausibly constructed setting, and fabulous villains using a host of inventive magic. Conan is the adventurer and rogue we’ve come to know over the last dozen or so stories, this time commanding a tribe of Afghuli raiders on the borders of Vedhya, the Hyborian Age equivalent of India. There are a few elements in the story that may recall others in the Conan saga, but this time around there is nothing that feels recycled or borrowed, indeed the whole story feels fresh and something of a departure from what has come before.

Howard: It was a grand adventure and a very different feel from the last little parcel of tales. I’m glad REH decided to vary his theme, and I’m scratching my head wondering why this story didn’t serve more often as a sword-and-sorcery template. Probably because its unique character made it far more difficult to imitate.

Next up, Bill and Howard dive into the first Conan novel, The Hour of the Dragon. Stay tuned.

Their previous Conan re-reads include:

See all of our Conan coverage here.

Possible spoilers, but not into too much detail…

This is a brilliant REH story – as if to give time for wounds to heal and populations to replenish in the usual Hyborian world Conan goes to the far east to rob and slay and chase the ladies! And he ends up chasing an exotic Pre-History Indian princess whom he rescues from the evil Tibetan black magician trying to claim her.

Heh, I can imagine all the “Political Correct” types bleeding from their eyes reading that story. Still, this is set in an epoch of time where while quite fantastic and fiction isn’t that far from RL. The period is after the “Great Flood” (end of last Ice Age to science) and modern history “Rise of the Sons of Aryas”… Far back in history Tibet was one of the greatest empires in the world, mighty warriors and dark magicians, but they turned inward. Also that far back what we now call India was actually quite civilized and powerful empire when most in the west were in caveman status or the first early huts.

This is, however, where I’m dissapointed with Dark Horse’s adaptation on it. Essentially they skipped over the whole chapter “Yasmina Knows Stark Terror” – which despite the Comics Code and reasonable limits on Magazine/Distribution was done by Marvel twice or so in the past quite well. I mean the part of the story to find fodder for the Brundage Cover…

Makes me shudder at how they’ll butcher – or if they’ll ever even get to – “Shadows in Zamboulla”… Hmm “Charles Saunders – I heard you speak Ire and Brimstone about that story, but when I read it I found a unique culutre where the settlers lived in peace with the black natives whom they allowed to keep their native culture and rituals and in turn they acted as a night watch – it even made me dislike Conan that he slayed some of them when they tried to ask that lady what she was doing late at night and take her home safely, as if his only reason to slay them was he wanted to bed her and saw the natives as competition…”

[…] the Comments (Black Gate) Discovering Robert E. Howard: Howard Andrew Jones and Bill Ward Re-Read “The People of the Black C… — “This is, however, where I’m dissapointed with Dark Horse’s adaptation on it. […]