Fred Saberhagen’s Berserker series was one of the most popular military SF series on the market during my formative reading years (the other, to which it was frequently compared, was Keith Laumer’s Bolo.) Today the Berserker novels, with their desperate battles against ancient planet-destroying engines of destruction, would be called space opera, but back then we just called them science fiction.

The first book, Berserker, was a collection of short stories originally published in IF magazine between 1963-66. It was released by Ballantine Books in 1967. But it didn’t become a series until the sequel, Brother Assassin, the first full fledged Berserker novel. It was released by Ballantine with a Richard Powers cover in January 1969 (above left).

This book has an interesting history. The early Berserker books were re-released by Ace Books in the late 70s with brand new covers, with Brother Assassin sporting the exceptionally fine piece by Michael Whelan (above middle). It was so fine, in fact, that the concept was stolen by Arbor House for the cover of the first book in Roger Zelazny’s Merlin series, Trumps of Doom, seven years later (see below). 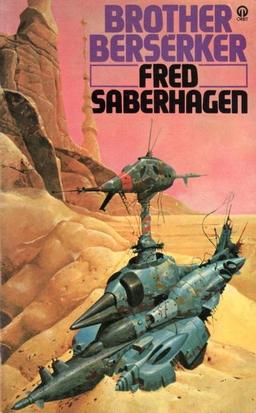 Michael Whelan brought a plagiarism suit against Arbor House due to the similarity between the two covers, and he won. The artist for the Arbor House edition was Andrew Rhodes.

Brother Assassin was reprinted in the UK by Orbit/Futura in 1975 under the title Brother Berserker, with a cover by Peter Jones (right)

It was reprinted again in the US in January 1997 by Tor, with a cover by Martin Andrews (above right).

Here’s the back cover text for the 1967 Ballantine version.

It was a dead world, its surface burned off by mindless berserkers set to destroy life no matter where they found it. And burned along with the surface were nine out of ten of the people who had made it live.

But way down, under miles of rock, the one-tenth survived, fighting with fatalistic calm to protect the remnants of their existence.

For some of them, their shattering loss had been too much, and memory had mercifully gone. But for the majority, time was an endless twilight devoted to holding off the final, definitive attack from the berserkers.

Time was what they needed for help to get to Sirgol. Time they had. All time was open to the inhabitants of Sirgol.

And this made Time their worst enemy.

The Berserker series gradually grew over the next few years, and I eventually lost track of just how many books were in the series.

Here’s a sample of some of the earlier volumes. 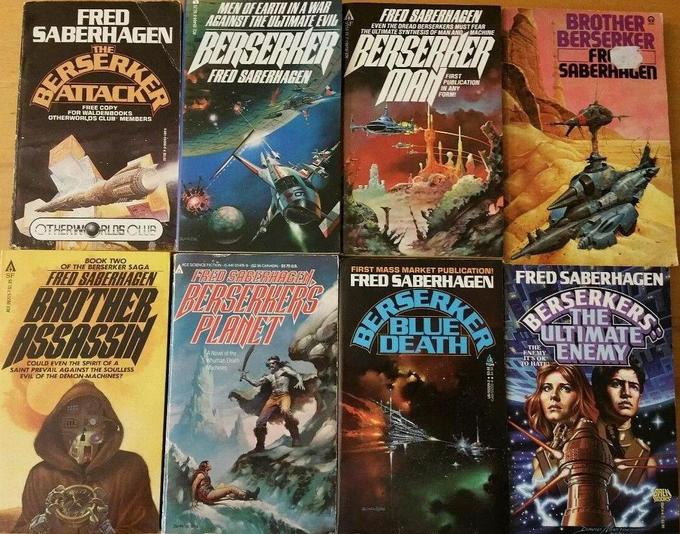 According to the ISFDB, the series eventually grew to a total of 17 volumes: 11 novels, 5 short story collections, and one anthology:

Brother Assassin was originally published by Ballantine Books in January 1969. It is 222 pages, priced at $0.75. The cover is by Michael Whelan. A digital version was published by JSS Literary Productions on March 15, 2013.

Saberhagen wrote ‘The Holmes Dracula File,’ which sold well but seems to be rather poorly regarded. There was a follow-up, ‘Séance for a Vampire’ which is pretty much forgotten.

I was early in my Holmes days when I read ‘File’ and I liked it. But with the plethora of pastiches that have been written, it hasn’t aged well.

Here’s a blurb on it:

World-famous “consulting detective” Sherlock Holmes faces a terrible crisis: a ring of criminal masterminds has threatened to loose thousands of plague-infected rats into the streets of London. But the Black Death isn’t Holmes’ only problem. A lone killer haunts the city. His calling card is a trail of corpses, drained of blood to the last drop.

The key to solving both crimes rests in the hands of a mysterious nobleman recently returned to London on a personal matter. His name is Dracula. The Count is quickly entangled in a web of evil that even his immortal powers may not be enough to breach. Holmes and Dracula soon come to the peculiar realization that they may be each other’s only hope.

I read Dominion, which is apparently the fifth volume in his Dracula sequence (The Holmes Dracula File is second, after The Dracula Tapes). It made no impression on me, and I have absolutely no recollection of it.

But it must have appealed to some readers, as Ace published some 10 volumes in the series!

Ah, Saberhagen. My first exposure to him was finding the paperback EMPIRE OF THE EAST, new, at a Brentano’s bookstore (or was it at a Crown Books? I can’t remember). I devoured it, and it’s remains a favorite to this day. That led me to the SWORDS books, which perhaps would make a fine topic for another vintage treasures post. It was later that I came across the Berserker books, and prefer the short stories to the novels, preferring their quick resolution of the problem presented. Fine writing, now mostly forgotten as is the author. Thanks for this one, John!

The only Saberhagen I’ve ever read is the Empire of the East trilogy; it’s one of those “far future/magic dominant” tales, with rediscovered technology coming into play (a tank raised havoc at one point, for example). There’s nothing at all original about it, but I thought it was well told, and energetic enough to be decent fun.

> Ah, Saberhagen. My first exposure to him was finding the paperback EMPIRE OF THE EAST

We discussed EMPIRE OF THE EAST in the comments section of the Appendix N article on Saberhagen way back in 2013:

But obviously the book deserves a little more attention.

> That led me to the SWORDS books, which perhaps would make a fine topic for another vintage treasures post.

Indeed! I think it’s safe to say the SOWRDS books were Saberhagen’s greatest publishing success. Certainly they were the most talked about in my reading circles, anyway.

> It was later that I came across the Berserker books, and prefer the short stories to the novels

I do as well — although I admit I haven’t read most of the novels.

> Fine writing, now mostly forgotten as is the author. Thanks for this one, John!

> The only Saberhagen I’ve ever read is the Empire of the East trilogy; it’s one of those “far future/magic dominant” tales…
> I thought it was well told, and energetic enough to be decent fun.

It certainly has its fans, even after all these years. A review would be most welcome, if you’re considering one!

I hadn’t made the connection between the BROTHER ASSASSIN cover and the TRUMPS OF DOOM cover. You have a sharp eye!

> I hadn’t made the connection between the BROTHER ASSASSIN cover and the TRUMPS OF DOOM cover. You have a sharp eye!

It wasn’t hard to notice the resemblance when I was reading both series roughly simultaneously. 🙂

And it was quite the topic of discussion at the bookstore where I shopped, The House of Speculative Fiction, in Ottawa, Ontario, back in 1985.

Aren’t the Swords books set in the same universe as the Empire of the East? I thought that I had heard that…

Thomas — I believe that’s correct, although I can’t recall the evidence for that connection.