I am a major fan of Solar Pons, The Sherlock Holmes of Praed Street. I wrote about him for Black Gate here and here. Fu Manchu expert William Patrick Maynard wrote about Pons and an unnamed but clearly Manchu here.

We know that Sir Arthur Conan Doyle gave us 56 short stories and 4 novels (novellas, really) featuring Sherlock Holmes. And there have been many television shows and movies with the world’s first private consulting detective. And the number of books and short stories written about Holmes by other authors is virtually uncountable in our modern age.

So, with an endless supply of options to get our Holmes fix (albeit, ranging from atrocious to excellent), why in the world would we need to read about a Holmes imitator dreamed up nearly ninety years ago?

‘Why Solar Pons?’ was the first essay in the first issue of my free, online newsletter, The Solar Pons Gazette. I believe that the Pontine Canon is a treasure trove for Holmes fans (of which I am most definitely one). So, read on and maybe you’ll get an itch to read a Pons story or two (sadly, the books are out of print and you’ll have to find some used copies, like I did).

I harbor a somewhat silly hope that this essay will someday be used as an introduction to a Pons collection.  So… 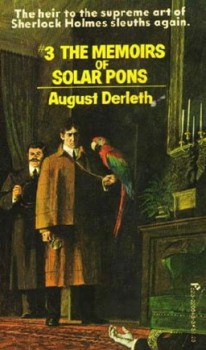 Why Solar Pons? What is it that attracts us to the 70-plus stories that August Derleth wrote featuring ‘The Sherlock Holmes of Praed Street?” Aren’t the Pons stories just imitations of Sir Arthur Conan Doyle’s most famous creation? Why read a copy when the original 56 short stories and 4 novels are readily available? And if one tires of the Sherlockian Canon, there are Holmes tales unnumbered written by other authors. Stories featuring Holmes and Watson are plentiful, so why bother with Solar Pons and Doctor Parker?

When deciding upon the style of the Solar Pons stories, Derleth immediately rejected parody, “that ridiculing imitation designed for laughter” and chose instead the less widely practiced form of the pastiche, which he decreed “fond and admiring.” This approach laid the foundation for Solar Pons’s success.

Thus, Pons is August Derleth’s own literary portrayal of Sherlock Holmes. Holmes is retired and London has changed when we meet Pons. An example that shows how adeptly Derleth managed these changes relates to automobiles. Pons uses them, but they are unobtrusive in the stories.

The reader does not stop and consciously make the distinction that Pons is riding in a car, rather than in the classic horse-drawn carriage of Holmes’ prime. The atmosphere is the same: Similar to Holmes, but different. Variations on a theme.

Holmes was critical of the police: especially Scotland Yard. His general feeling was that they were tenacious, but plodding and unimaginative. He uses the term ‘imbecile’ more than once, and he tells Watson that (official) local assistance is either biased or worthless.

Pons is also frustrated with the official force, but he is less harsh than Holmes and generally speaks better of Inspector Jamison than Holmes does of Inspector Lestrade. The razor-sharp personality is blunted a bit. Variations on a theme.

Holmes has no use for the supernatural in his investigations. “This agency stands flat-footed upon the ground, and there it must remain. The world is big enough for us. No ghosts need apply,” he says. Though all of Pons’ recorded cases have conventional solutions (excluding the Derleth collaborations with Mack Reynolds), he is much more open to the possible existence of the supernatural. 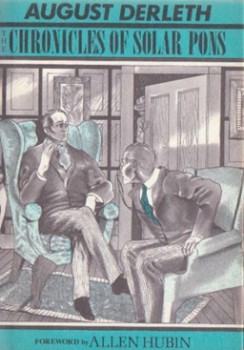 Pons says, “Ought we not to say, rather, we believe there are certain phenomena which science as yet has not correctly interpreted or explained?” Referring to clairaudience, he tells Parker, “Let us just say it goes against what we know of science at this point of development of man.” Pons and Holmes use similar methods of detection, but the former is willing to consider non-scientific possibilities. Variations on a theme.

Of course, some elements of the Pons stories do feature less individuality. In both sets of tales, the doctor (whether Parker or Watson) is an able, dedicated companion, trustworthy in any situation. He is always ready to abandon his practice (and sometimes desert his wife) to assist in an investigation.

He attempts to emulate the detective’s methods, with poor results. And he is often slighted, if not outright insulted, by his more intelligent flat mate. Derleth gives us Dr. Lyndon Parker, a narrator and assistant we easily identify with Doyle’s Dr. John Watson.

The lodgings at 7B Praed Street include the comforts of 221B Baker Street. There is the mantle above the fireplace, the window overlooking the street, the detective’s chemical table, the violin; the reader summons up memories of Baker Street and transposes them onto Praed Street.

Landladies Mrs. Johnson and Mrs. Hudson are nearly indistinguishable and Pons’ army of street urchins, the Praed Street Irregulars, are the contemporary equivalent of Holmes’ own Baker Street Irregulars. Derleth gives us a different version of Holmes, but with familiar elements sprinkled throughout. It is the Hollywood approach to movies: the same, only different.

A reading of the Solar Pons tales shows that he is clearly more than a carbon copy of Sherlock Holmes. There is much that we recognize in the Pons stories, but there is also much that is new. Derleth is a wonderful writer who masterfully blends these similarities and differences to create a vibrant character. Solar Pons sates our appetite for Sherlock Holmes by giving us a similar, but different flavor. Variations on a theme.

We think we want more Holmes. Why Solar Pons? Because August Derleth gives us what we really want: more than Holmes.

I haven’t gotten into the Lovecraft side of Derleth too much (Horror generally creeps me out). But I do know that regardless of criticism of Derleth’s treatment of the Mythos, he kept Lovecraft in print through Arkham House and Lovecraft’s legacy today would likely be much diminished if not for Derleth and Donald Wandrei.

The fight between Wandrei and Derleth’s Estate over the latter’s will and control of the Lovecraft copyright is worth an essay.

While not by August Derleth Fedogan and Bremer has copies of a volume of Basil Copper’s Solar Pons for sale.
http://www.fedoganandbremer.com/products/the-exploits-of-solar-pons

Fedogan and Bremer books are handsome products and for 24 bucks are a steal.

I did not know that Fedogan and Bremer still had the Copper books in print. Nice to see.

Copper’s stories are longer than Derleth’s. Closer to a short novella than Derleth’s short stories. I enjoy them and think they’re definitely worth a read.

It’s unfortunate he and the Derleth Estate had such an acrimonious parting.