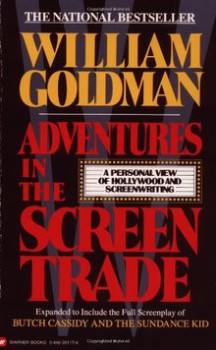 William Goldman isn’t the first person to comment on this phenomenon, but he’s the first person I ever came across who had an explanation. You know what I’m talking about: The difference between real reality and fictional reality. We all know about the lists of occurrences that happen only in the movies, or on TV – and the real life things that never seem to happen in movies or TV.

Like, the protagonist always finds a parking spot right in front of where she needs to be. She always has the right amount of money for the taxi already in her hand. She can always find a taxi when she needs one. And there’s always cell phone reception.

My personal favourite is how no one ever says “goodbye” on the phone. Not even so much as a “seeya.” Just try that some time in real life. Go ahead, hang up without saying “goodbye.” I dare you. Though the one I really wonder about is that people on TV don’t watch TV.

William Goldman, the screenwriter and novelist, is likely best known to us genre people as the creator of The Princess Bride – both the novel and the screenplay. It shouldn’t surprise us that, as an Oscar-winning screenwriter, he has an explanation for these phenomena. As he sees it, they’re essentially – and essential – short cuts. As those of us who are writers know, there are all kinds of real-life occurrences, that happen all the time, but that don’t advance the plot, or reveal character, and are therefore useless from the point of view of storytelling. 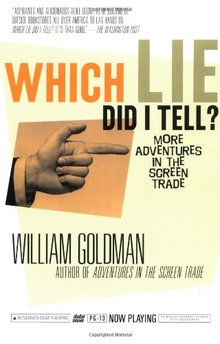 Unless, of course, they do, in which case the protagonist suddenly has no cell phone service, or can’t find a taxi or parking spot. Goldman’s point was that the writer, particularly the screenwriter, can’t use up valuable time fumbling for change. No, not even for verisimilitude. In fact, we’re so used to the fictional reality of film and TV that we usually accept it without analysis (willing suspension of disbelief strikes again). So much so, in fact, that we actually don’t notice these phenomena until they’re pointed out to us, usually in a list.

I’m thinking that we’re so used to this kind of thing that it may even be difficult for us to see them when we go looking. That’s why I’m trying to develop a list for fantasy.

If we’re dealing with contemporary fantasies, set in modern cities, then we can have the same list for any movie or TV show, involving modern technology and transportation.  However, if we’re dealing with the far-more-common version of fantasy, which is either set in the past of our world, or in a pre-industrial version of another world, wouldn’t we have a different list?

Here’s a partial one to get us started:

Fantasy characters don’t go to the bathroom. This isn’t limited to fantasy, of course, fictional characters are rarely in bathrooms unless they’re shaving or having sex. John Travolta’s character in Pulp Fiction is a notable exception.

And while we’re on the subject, fantasy characters don’t step in horse poop. Or poop of any other kind, for that matter. You’d think they would, from time to time, given the prevalence of horses in most fantasy scenarios.

Fantasy characters eat all kinds of food that aren’t in season. Or that would be prohibitively expensive if they were in season elsewhere. Of course, this is true of other fictional characters as well, but it’s less notable for fictions set in the modern world.

No one’s clothes ever need to be cleaned, or have the bloodstains removed. I’ve certainly never had my characters wash their clothes, or even pick them up from the laundry.

Fantasy characters don’t get scurvy. They’re also not killed by septic infections, or childbirth, or any number of other medical conditions that would apply in the real world, given the same state of medical knowledge.  I mention scurvy in particular because, among its other characteristics, it dissolves scar tissue, all scar tissue, no matter how old. Think about that for a minute. I can’t think of a single human character of mine that doesn’t have a scar.

Fantasy characters have perfect teeth. This is so true of fictional characters everywhere, that it’s easy for us to overlook it.

Have a quick look at The Princess Bride, either version. No one goes to the bathroom, no one steps in horse poop, everyone’s clothes are always clean, and they’re all in great health, including their teeth. Okay, they don’t eat much (they don’t eat!), so we can’t judge what’s in season, but otherwise I think Goldman is 6 for 6.

What do you think? Can you add to my list?

Violette Malan is the author of the Dhulyn and Parno series of sword and sorcery adventures (now available in omnibus editions),  as well as the Mirror Lands series of primary world fantasies. As VM Escalada, she is writing the upcoming Halls of Law series. Visit her website:www.violettemalan.com.

LOVE Goldman’s two books on the industry. The first one especially is a can’t put down type of read.

There is a moment in The Never Ending Story, the book, where Bastian has to stop reading because he needs to have a shit. This is commented on, at some length but, by the time he is in his fantasy world, such bodily functions have been forgotten. This genre is not called fantasy for nothing! Oh and I totally agree about never saying goodbye on the phone. What irritates me about it is that it isn’t really a short cut. It takes 2 seconds to say goodbye! Neil

I guess I’d reframe this as “stuff that can happen with a narrative purpose”. Musketeers don’t generally concern themselves with laundering clothes, but there’s that great rendezvous/fight-scene in the laundry in the Richard Lester film. In The Swords of Lankhmar the Mouser takes a dump in a privy in Lankhmar-Below, and it’s an important plot-point for two or three reasons. Etc.

In my story “The Dragon’s Horde,” featured in Janet Morris’ anthology, HEROIKA: DRAGON EATERS, I have a character murdered while relieving himself. We are at our most vulnerable when we sleep, use the bathroom and, as Hitchcock so chillingly showed us, when we shower.

Yeah, depending on which branch of fantasy you examine these days, you’re more or less likely to find some of the … earthier … things, but if you do, it’s usually somehow plot- or story-related.

I remain convinced that the Lords of Demonland never had to go to the bathroom, however.

Once upon a time went round and round with an author who had a paragraph devoted to the main character changing clothes and using the loo, all to no plot point in my humble (though not so humble) opinion. I felt it contributed nothing to the tale and in fact slowed it down for no discernible reason. The author felt it showed the character’s humanity and that it was necessary for demonstrating the character was just like anyone else. I still disagree, but we managed to agree on a shortened version of the paragraph. I’ll stick with the ‘if it slows things down for no reason and/or doesn’t propel the plot (not the plop!),’ strike it.

Last month on Tor’s Rocket Talk, Sam Skyes and Justin Landon talked about how characters in fantasy don’t poop, and how hero’s seem to have no concept of diet and training. It got a pretty good laugh out of it.
If anyone is interested: http://www.tor.com/2015/04/22/rocket-talk-episode-51-sam-sykes-and-delilah-s-dawson/

Bob: the screenwriting books are almost my favourites of his.

@NeilH, you’re right, I’d forgotten that part of the book, it’s been so long since I read it. I can’t remember, though, was it important to the plot?

Hi James, I love Lester’s Three Musketeers particularly for its gritty portrayal of life at the time. If I remember correctly, someone does slip in horse poop at one point. I don’t think of this series of films as fantasy, and perhaps that’s why I didn’t refer to them; on the other hand, genius is always different from the crowd.

@Joe B. An excellent example of the “never” occurring event being used as a plot device.

@Joe H, yes, exactly. When these events or phenomena occur, it’s usually to make a point.

@Jason, some writers are just so in love with the sound of their own voices (I include myself) that they can’t see a useless paragraph until it’s too late. Thank the gods for helpful editors like you.

@DJ I’m going to have a look at that, thanks for the link.

@JD. I must be the only person on the planet who hasn’t watched GOT, so I missed that one.

Re Never Ending Story – no I don’t think it was important to the plot. It is obvious that Ende was answering a persistent question from the readers – why do we never see the character go to the bathroom? It is a long time since I read the book and I can hardly remember any of it, but that bit is still with me. Unfortunately, it seems to me be exactly the point you make about writers being in love with the sound of their own voice. Irritating that the only thing I recall about a book is how useless that sentence was. Oh, my kids have all the box sets of GOT but I have not got around to watching them either! Neil