Melinda Snodgrass’s The Edge of Reason was originally published in hardcover with a snoozer of a cover (seriously — see below) by Tor Books in 2008. For the paperback edition in 2009 Tor recolored the cover, which I don’t think helped much. Maybe in 2009 it made sense to dress up the tale of a secret war between the forces of science and superstition as a Da Vinci Code lookalike, but here in 2015 we know better.

Maybe that’s why I never noticed The Edge of Reason when it first appeared. Why have I noticed it now? Because Tor reissued it on April 21 with a vastly superior cover by Chris McGrath (above). Seriously, this book has giant tentacles, and no one thought to feature them on the cover? This is Publishing 101, people.

Tor has not gifted us with a newer, awesomer edition of The Edge of Reason simply because Chris McGrath had a free weekend. The sequel, The Edge of Ruin, will be reprinted in paperback on July 28th (above, cover by McGrath), and the third volume, The Edge of Dawn, arrives on August 4th — also with a McGrath cover. Which also prominently features tentacles. Because that’s how you do it.

The Edge of Ruin, the second in the series, originally appeared in hardcover from Tor in April 2010, with an even more boring cover than the first one, which I didn’t think was possible (above right). The July 28th release is its first appearance in paperback. The complete release data is: 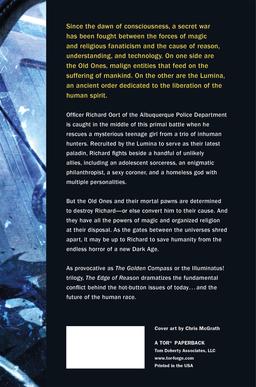 Melinda M. Snodgrass is pretty famous. She’s probably best known as the story editor for Star Trek: The Next Generation during its second and third seasons, when the show suddenly became watchable.

She wrote several Star Trek episodes, and has also contributed scripts for the Odyssey 5, The Outer Limits, SeaQuest DSV, and Reasonable Doubts. Her other novels include the Circuit trilogy (Circuit, Circuit Breaker, and Final Circuit), and she is the co-editor of George R. R. Martin’s long-running Wild Cards series.

Here’s the back cover text for the first novel (or click the image at read to read it in its natural environment):

Since the dawn of consciousness, a secret war has been fought between the forces of magic and religious fanaticism, and the cause of reason, understanding, and technology. On one side are the Old Ones, malign entities that feed on the suffering of mankind. On the other are the Lumina, an ancient order dedicated the liberation of the human spirit.

Officer Richard Oort of the Albuquerque Police Department is caught in the middle of this primal battle when he rescues a mysterious teenage girl from a trio of inhuman hunters. Recruited by the Lumina to serve as their latest paladin, Richard ends up fighting beside a handful of unlikely allies, including an adolescent sorceress, an enigmatic philanthropist, a sexy coroner, and a homeless god with multiple personalities.

The Old Ones and their mortal pawns are determined to destroy Richard-or subvert him to their cause. And they have all powers of magic and organized religion at their disposal. As the gates between the universes shred apart, it may be up to Richard to save humanity from the endless horror of a new Dark Age.

Provocative as The Golden Compass or the Illuminatus! trilogy, The Edge of Reason dramatizes the fundamental conflict behind the hot-button issues of today… and the future of the human race.

See all of our recent New Treasures reports here.

I missed this series, too. Now I have a chance to correct that. Thanks, John!

No thanks are necessary…. just doing my job!

The protagonist, Richard Oort, is fighting the monsters of the Id with a Sword of Reason, a literal Occam’s Razor. Gotta love it.