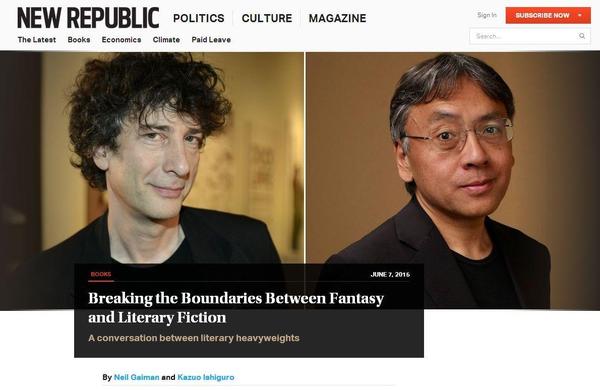 The New Republic has posted a lengthy conversation on fantasy, titled Breaking the Boundaries Between Fantasy and Literary Fiction, between Neil Gaiman (The Graveyard Book, American Gods) and Kazuo Ishiguro (The Remains of the Day, The Buried Giant). Among other fascinating topics, the two discuss sword & sorcery, and the different cultural approaches to swordfights.

KI: If I was aware of genre at all during the fight scenes, I was thinking of samurai films and westerns. In samurai movies mortal enemies stare at each other for a long time, then there’s one flash of violence and it’s over.

What do you reckon would have happened if I’d been a writer steeped in fantasy? Would I have had people talking while bashing swords?

NG: You’d definitely have flashing blades. One of the pulp fantasy genres of the Thirties was “Sword and Sorcery”: there’d be mighty feuding warriors with large blades, talking, clashing, grunting… you would have got a solid half-page out of it, partly because the writers were paid by the word.

KI: When I first came to Britain at the age of five, one of the things that shocked me about western culture was the fight scenes in things like Zorro. I was already steeped in the samurai tradition — where all their skill and experience comes down to a single moment that separates winner from loser, life from death. The whole samurai tradition is about that: from pulp manga to art movies by Kurosawa. That was part of the magic and tension of a swordfight, as far as I was concerned. Then I saw people like Basil Rathbone as the Sheriff of Nottingham versus Errol Flynn as Robin Hood and they’d be having long, extended conversations while clicking their swords, and the hand that didn’t have the sword in it would be doing this kind of floppy thing in the air, and the idea seemed to be to edge your opponent over a precipice while engaging him in some sort of long, expository conversation about the plot.

Wow, very cool, thanks for posting this John. What a read. Highly recommend it.