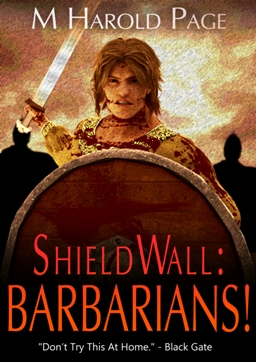 I lay it out like that because there’s exactly one thing I wish were different about M. Harold Page’s new book, Shieldwall: Barbarians!, and it’s something I fully expect the next volume in the series will satisfy.

So, on to the story:

A brother chases warbands, and then armies, across the ragged edges of the Roman Empire, right into a city besieged by Attila the Hun, because that’s what it will take to rescue his sister from slavery. On the way, young Prince Hengest’s own warband doubts his readiness to lead them. Can a boy fostered among Romans ever truly become a man of the Jutes? And as their odds of finding Princess Tova look slimmer and slimmer, why should they keep risking their lives far from home against foes they have no quarrel with? The man who was to marry Tova, hoping to claim Hengest’s crown for himself, feeds those doubts. That insubordination will end in blood, sooner or later.

Hengest is too civilized for his barbarian kinsmen, too barbaric for the fading nobility of the empire, and too late to side with Attila, whose army encampment spreads as far as the eye can see. The young Jutish prince and his men will take the job the doomed city of Aurelianum offers them. Doomed — for Aurelianum cannot possibly stand against Attila, can it? What Hengest must do is find his sister, wherever her captors have hidden her in the city, and get her out through the carnage when at last Aurelianum falls and releases him from his oath to protect it.

Good thing Hengest is a master of improvisation, because nothing plays out as he expects.

You can count on M. Harold Page’s books for certain virtues. He knows how to pace a fast-moving plot full of incident. The breadth of his historical research is a beauty to behold. Most writers know how to evoke the usual five senses in a fight scene, but no author I’ve ever come across is as good at expressing the kinesthetic experience as Page proves consistently to be. His characterization and cast dynamics are strong, with dialogue that reveals the constantly shifting patterns of camaraderie, rivalry, doubt, and trust among uneasy companions at arms.

I expected to have problems with Page’s characterization of women, because the crisis that forces our hero Hengest to begin his journey is the kidnapping of his sister. I’ve read enough Burroughs to have a knee-jerk response to kidnapped princess plots. What we have here is different. This volume of the series gives us only a few brief glimpses of Tova, but those glimpses show a formidable woman forced to bide her time while exceedingly outnumbered. I also guessed that Tova would be the only female character to get many speaking lines in a book like this, but Page gives us Flavia, a city girl whose father knows and values her brains and resourcefulness. Flavia’s aristeia toward the end of the book is not a typically anachronistic girls-fight-just-like-boys scene, but one in which her particularly urban skills and courage make it possible for the barbarians to do what must be done. Tova resists her captors — every witness Hengest finds who has seen his sister says something like, “Oh, you mean the fury?” — but she’s not throwing her life away over some notion about fates worse than death. She doesn’t need anybody to counsel her out of a career as a doormat, just someone to tip the odds and throw her a weapon.

And that brings us to the one thing I wish were different about Shieldwall: Barbarians! It’s written to work as a stand-alone or as a series starter, depending on whether it finds an audience to support further volumes. It does stand alone, in the sense that Hengest finds his footing as a young officer. He earns his warband’s trust and loyalty. But the ending is part resolution, part cliffhanger. The male characters’ story does have a beginning, a middle, and an end, but the female characters have only had their beginning. Page has earned my trust that he can write women who do stuff, think stuff, and feel stuff, and I want to see their arc reach its end. I want to see Hengest and Tova and at least a few of their companions make it through the Battle of Orleans alive. The city of Orleans/Aurelianum has the biggest cliffhanger of them all: Attila the Hun is still at the gates with 100,000 warriors. Page’s posts here at BG have given me enough of a taste of the historical gap that awaits the city of Aurelianum, a gap Page is free to fill with whatever explanation seems coolest to him, that I want to see his handling of the whole siege through the eyes of his protagonist. Page has convinced me that, at the end of volume one, Prince Hengest has become enough of a leader, enough of a combat badass, and enough of a negotiator, that he’ll get out alive with as many of his people as he can save. But it won’t play out in any way Hengest expects. He’s a master of improvisation, and I want to see what he improvises.

Ultimately, then, it’s not only M. Harold Page who needs to take action for my one wish about this book to be satisfied. It’s you, dear readers. I need enough of you to buy the book for Page to complete the series. I want to know there’s more on the way.

Sarah Avery’s first short fiction collection, Tales from Rugosa Coven, is a finalist for the 2015 Mythopoeic Fantasy Award. A trio of linked contemporary fantasy novellas, the collection follows the adventures of some very modern Pagans in a supernatural version of New Jersey even weirder than the one you think you know. The Trafficking in Magic, Magicking in Traffic anthology she coedited with David Sklar includes stories from James Enge, Elizabeth Bear, and Darrell Schweitzer. Avery’s short story “The War of the Wheat Berry Year” appeared in the last print issue of Black Gate. Later this year, she will launch a Kickstarter campaign to self-publish a related novella, “The Imlen Bastard.” You can keep up with her at her website, sarahavery.com, and follow her on Twitter.

Phew! The characterization of the women was one of the things I worried about.

The book is of course available for Kindle on Amazon (http://amzn.to/1FHArFn) and also Lulu in ebook format (http://www.lulu.com/shop/m-harold-page/shieldwall-barbarians/ebook/product-22129346.html)

Sold! Er, Bought! Well, you know what I mean.