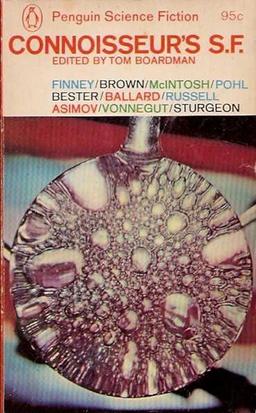 It’s a small world. The last story in the last anthology I read (Other Dimensions, edited by Robert Silverberg) was “Disappearing Act,” by Alfred Bester. The next book I read was this one, and the first story therein was “Disappearing Act,” by Alfred Bester. How do you like that? In any event, I didn’t read it again, but copied my remarks from the review at my site to this one.

In Connoisseur’s Science Fiction, Boardman, a pioneering SF reviewer in Britain who went on to edit four more anthologies, attempted to put together a collection of science fiction stories that had literary merit — or something like that. And you thought this business about science fiction seeking legitimacy was a new thing. Half of the stories worked for me and half did not.

The military is trying to determine why shell-shocked patients in a secret ward are disappearing. The answer is a fairly simple one having to do with other dimensions. But it’s made more interesting by the portrayal of the General in charge, who’s way over the top and who’s constantly demanding experts to sort out whatever he needs to know. Comparisons to a certain Kubrick movie wouldn’t be too far off the mark.

From one of the best known science fiction writers who wasn’t a science fiction writer, this story comes from the early days of Vonnegut’s writing career. It’s a look at potential drawbacks of life extension as viewed through the lens of one large extended family who live in cramped conditions in a crowded future. It’s a grim premise but Vonnegut tackles his subject with the humor he brought to most things.

While Sturgeon’s story uses some science fictional tropes, it could have probably worked just as well with all of that stripped away. Mr. Costello, it is gradually revealed, is a pretty nice guy who eventually turns out to be not so nice. His charismatic and manipulative ways lead to him becoming a totalitarian leader of a society that’s soon thrown into turmoil, thanks to his efforts.

Like Vonnegut, Ballard started out writing fiction that fit more or less into the traditional SF mold and went from there. And went pretty far, now that you mention it. This story is from his early days as well, before he developed his highly distinctive voice. Like the Vonnegut piece, it looks at the perils of overpopulation, but focuses more on the geography of a massive city where manned flight apparently no longer exists and the protagonists are trying to devise some type of glider.

“The Waveries,” by Fredric Brown Weary of SF TV and movies where aliens are simply humans with a few globs of latex on their face? Brown’s waveries are aliens that are about as far from human as you can get. Earth is irrevocably changed when they invade but here’s the kicker – it’s all for the better. I thought Brown was a bit overly optimistic on this point but perhaps that’s just my pessimism talking. 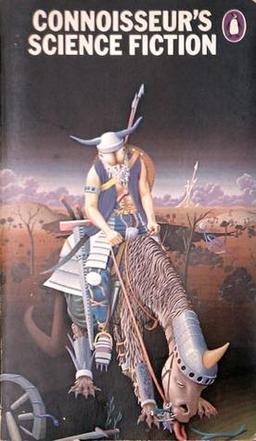 “The Wizards of Pung’s Corners” by Frederik Pohl

It’s satire. I get it. Pohl’s story had a few moments, but most of the charms of this story of subliminal advertising and a massive military taking on a small town were lost on me.

“Quit Zoomin’ Those Hands Through the Air,” by Jack Finney

“The Fun They Had,” by Isaac Asimov

Automated teaching methods (robots) in the future. Well, it is Asimov, after all. Pupils of the future find a genuine printed book telling of schools of yesteryear where groups of students gathered to be taught and have fun. Not much fun had by this reader but at least it was short.

First contact with a newly found civilization and the doubletalk that ensues. Tedious and I only held out to see if the author was going to make a point. I’m not sure if he did but at the end he references a book that’s in the Earth ambassador’s library – Diabologic, the Science of Driving People Nuts. Judge for yourself if this is all a not so veiled reference to a well-known book by a one-time SF writer.

I thought McIntosh was onto something with this tale of a contentious divorce and android’s rights ¬ for about the first page. Then in turned into a tiresome courtroom drama with an approach that might have been better suited to a thesis than a work of fiction.

William I. Lengeman III holds forth at www.wileng3.com. His last article for us was “.”