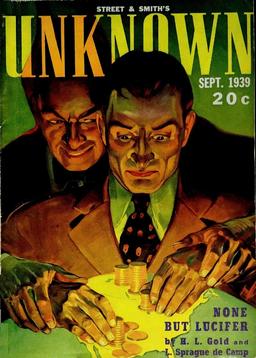 My last post was a review of Galaxy’s September 1952 issue. So I’m jumping back more than a decade to an issue of another magazine I’ve wanted to get into for a few years.

At last year’s World Fantasy Convention, while John O’Neill was trying to set a world record for the number of books carried in a single stack (seriously, if you had seen it, you would have been impressed), I came across a dealer selling old issues of Unknown. Actually, I told my wife I was trying to find some, and she actually found a bin of them. While not impossible to come by, collecting issues of Unknown is somewhat more cost prohibitive than collecting issues of Galaxy.

Unknown (later retitled Unknown Worlds) was a speculative fiction magazine that ran from 1939 to 1942. It was published by Street & Smith, who also published Astounding. It was edited by John W. Campbell, Jr., who also edited Astounding. The early issues have art on the cover, like the September 1952 issue. These are also the more expensive ones. But if you don’t care too much about quality , you can find some inexpensive copies. Mine was $15.

What I find perhaps most interesting about this particular issue is that it contains a novel written by H. L. Gold and L. Sprague de Camp. Not only that, but I think (prove me wrong or right, Rich Horton) that this may have been the first time Gold used this particular pseudonym. He’d had stories published as Horace L. Gold but not the familiar H. L. Gold that he continued to use as his soubriquet at Galaxy. Am I the only one geeking out about this? Please tell me I’m cool in a Galaxy/Unknown/pulp sort of way.

None But Lucifer by H. L. Gold and L. Sprague de Camp — William Hale has realized the truth about Earth. It isn’t Earth, at least not in the sense people think of it. Everyone on Earth is actually living in Hell.

He begins a simple experiment. If he sets his heart and mind on something specific, it will never come to pass. But if he keeps that focus while pursuing anything else, he can have it. For example, he sells all that he has to take up a life on the streets. And as his health and appearance fade to a shadow of who he was, he storms into an office, demanding a position as an executive. Not because he wants the position but simply to prove a point. And he gets the job.

With this as proof to himself that he can manipulate the world under the right circumstances, he sets out to find the person running Hell — Lucifer. He puts an advertisement in a newspaper, boasting of what he knows and awaits an answer. He soon gets a reply from a man named Alexander P. Johnson, a shrewd businessman who seems to have information on every company.

William demands to know the truth, but Alexander is evasive. William tries to shoot Alexander, but the gun jams. He then tries to pull a knife from its sheath, but he can’t. William explains that this is his proof of Alexander’s identity. Alexander then admits that he is Lucifer.

I won’t spoil the rest. “Spoilers? For a novel that’s over 70 years old?” It’s an inventive fantasy novel with some levity. There are some unanswered questions, but the story ends satisfactorily.

“Danger: Quicksand” by H. W. Guernsey — A foursome of young adults are traveling by car into the marshes, heading toward a haunted cabin. After they reach it, the car gets stuck though it’s still on the road. When Andy gets out of the car to investigate, he finds the road rubbery. He soon realizes that it’s not a road.

I’m not generally into horror, but this story wasn’t bad. It’s not quite as shocking as what I’m used to in the horror genre, so that might make me more closed minded to something like this story. Guernsey is actually a pseudonym of Howard Wandrei, who was both an artist and short story author. 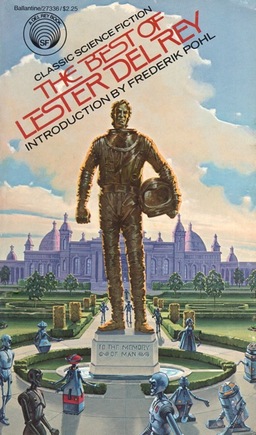 “Caliph of Yafri” by Silaki Ali Hassan — Hassan Ali becomes caliph of Yafri, which angers his older brother, Abdullah. Abdullah hires an assassin to murder his brother and then becomes the next ruler of Yafri. But Hassan is given a second chance at life, albeit a brief one, and he returns to Yafri to seek revenge.

The narrator carries most of the passion of the story, calling curses upon Abdullah as he describes his actions. I don’t think the story would have worked as well otherwise. (Silaki Ali Hassan is a pseduonym of Ulysses George Mihalakis.)

“The Coppersmith” by Lester del Rey — Ellowan Coppersmith is an elf from the hills of the Adirondacks. He awakens from a deep sleep – sixscore years – and heads toward the nearest town to try to earn a living. Ellowan can craft brass and copper, but he can’t work with aluminum or enamelware, which most people use for cookware. Eventually, he’s able to find an auto repair shop that works on copper radiators. But the pollution from cars is the likely reason that Ellowan’s kindred have yet to emerge from the hills themselves, so he’s hesitant to use his skills in this way.

This is a remarkable tale, reprinted multiple times, including in The Best of Lester del Rey. If you have a few minutes to yourself, search for this piece. Excellent fantasy doesn’t need to have shocking moments, epic battles, or high stakes; it can be as simple as an elf seeking honest work.

“Portrait” by Ray Cummings — Ezra Todd buys an expensive box of oil pigments. Ezra had always dreamed of being a great artist, and after so many years, he had almost given up hope. After trying the paints, he finds that whatever he captures on the canvas becomes the thing itself. Painted flowers disappear from their vase; a painted cat disappears with the completion. But the paintings are incredibly life-like, to the point that he’s able to sell whatever he paints at great prices. His only trouble is that the paints are running low, yet his work is in high demand.

Cummings writes well, and the story held my interest. I didn’t think the ending was that surprising, but I think Cummings wanted it to be. The blurb at the beginning of the story tipped me off more than anything. I really should stop reading those.

There’s also an article titled “Over the Border” by Eric Frank Russel that examines reports of unusual lights and aircraft from across the world. Russel shares his hypothesis that the unexplained phenomena are actually alien spacecraft from Venus that purposefully dive into ocean waters to steal Earth’s resources, such as oil. Or even worse, that they might be collecting people as souvenirs.

Russel’s commentary is made with all seriousness, but I found it humorous. I know that’s not fair — at this point in time, we knew very little about Venus, and there are still unexplained phenomena that people explain as alien encounters. I just couldn’t go along with his premise.

Matthew Wuertz’s last retro review for us was the September 1952 issue of Galaxy Science Fiction.

That does seem to be the first time Gold published as by H. L. Gold. His earlier stuff was either as by Horace L. Gold or as by a rather different form of his name: Clyde Crane Campbell. (So Gold shared more with John W. Campbell than just editing a major SF magazine!)

“None But Lucifer” is a curious case — a novel I’ve heard of, and just assumed would have been published in other places than Unknown prior to 2002 — (though it was obscurely reserialized in the version of Galaxy briefly put out by Gold’s son E. J. Gold in the ’90s).

Well, I also find this first-use pseudonym interesting because in the March, 1952 issue of Galaxy, he wrote of his pseudonym, “I can’t pretend to be fond of my name, but I don’t use initials to escape it; that was decided upon by an editor.” So that would be none other than Campbell. Little did Campbell know that Gold would one day edit a magazine that rivaled his own, using the pseudonym he gave him.

You got a good deal, Matthew. Those early issues are getting harder to come by in any condition, especially the ones that contain stories by L. Ron Hubbard.

I was fortunate to find ten issues late in the magazine’s run that had been bound together with library binding. They’re in great shape and reading them doesn’t do much damage, something I can’t say about the other issues in my collection.

Here’s a trick: go to a convention and wait until the last day when the dealers are thinking, “Man, I don’t want to schlep all this stuff back home.” You can usually talk them down some. And the more you buy, the greater the discount. But you have to ask.

I really want to go to the Windy City Pulp and Paper Convention one year and see what I can come away with.

“None But Lucifer” was finally published in book form in 2002 by Gateways Books & Tapes. (I just found out and ordered a copy. I’ve loved de Camp and Gold for years! (According to a comment on either Goodreads or Amazon by someone who spoke to de Camp the novel had not been published because the two of them could not agree on a few particulars like who got top billing.)