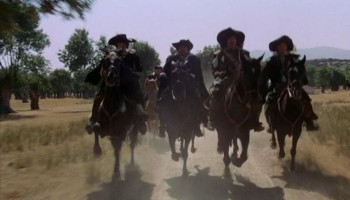 I can hear the protests already: “Don’t you mean Alexander Dumas’s The Three Musketeers?” Well, yes. In a way. But I refer here to the film, not the novel. This 1973 outing is one of perhaps eight full-length film adaptations of this grand French chestnut, and, as directed by Richard Lester, it’s essential viewing for all fans of action, swordplay, and pace.

Indeed, to cut and slash the weighty novel down to a manageable length, no small violence has been done to the text, and the film practically tumbles over itself trying to keep up with its own story-telling requirements. Lester fills each rowdy frame with visions of period France; in his crowd scenes, there’s so much going on that the film bears an immediate second viewing, just to keep up with the busy visuals.

Best of all, of course, are the fabulous, kinetic, and often hilarious sword fights. Athos, Porthos, and Aramis may be musketeers, but there’s hardly a discharge of powder and shot to be found; these heroes (dandies and drunks, really) live by the sword, full stop. 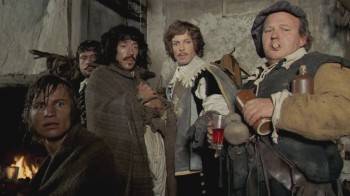 I first saw The Three Musketeers on network television at about the age of ten. My father, of all people, turned it on and (shock of shocks) sat down with me to watch. The dueling had me on the edge of my seat, while the pratfalls left me in helpless hysterics. I wasn’t sure I’d ever seen a funnier movie, and two years later, when I discovered Dungeons & Dragons, it was precisely Lester’s brand of creative, use-anything-handy combat that I did my best to emulate and provide for my players.

Simple: in most action movies, the hero uses their chosen weapon (guns, nowadays, or blasters) plus their fists and maybe their feet. The body count rises accordingly. But in The Three Musketeers, the many combatants employ candelabra, mud, vats of laundry, whetstones, ladders, chairs, roast fowl, stray lumber, bars of soap, mill wheels, sand, plumed hats, lanterns, bed sheets, and uprooted trees. They puff and tire; they snort and sweat; they make it abundantly clear that the business of staying alive is no small effort (though hardly anyone dies of their wounds). And yet, even as every feint and yell underscores the seriousness of the endeavor, Lester tosses out one spot-on visual gag after another. 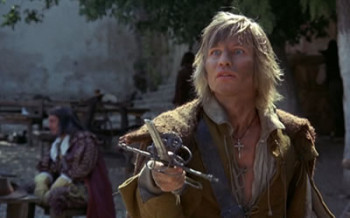 It could be argued that the film overall suffers from a lack of consistent tone. Which is it, high-minded adventure, or a salute to Harold Lloyd — with rapiers and fancy costumes in place of industry and clock towers? Could this be at its heart a romantic dalliance, full of absurd seductions and even less believable statecraft, or is it a legitimate historical, laced with international intrigue?

The (collective) answer is that The Three Musketeers is all of these things, all thrown together: a filmic stone soup, almost gleeful in its refusal to confine itself to just one trope.

Should any viewer be surprised? This is Richard Lester, after all, the man who directed A Hard Days’ Night, Help!, and How I Won the War. Tossing the feathers is what this man does. 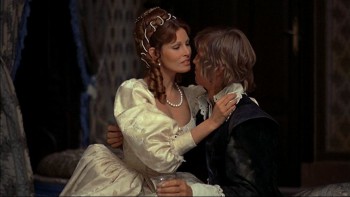 Lester went on to direct one of the best and genuinely sweetest historicals the movies have to offer, Robin and Marian (1976) – yes, that Robin and Marian — proving that even old dogs can learn new and calmer tricks. What then to make of his later commitment to the Christopher Reeve Superman franchise, for which Lester took the helm for parts II and III (1980 and ’83, respectively)?

IMDB gives up two priceless pieces of trivia. First, Oliver Reed took a sword to the throat while filming and “nearly died.” Since he obviously completed the filming, I’m not so sure about his proximity to death’s dire door, but one imagines that a thrust to the throat did hurt — a bit — and that he then bled with Reed’s trademark weary, existential disdain.

[Actually, it’s a wonder anyone survived this madcap set. CGI was decades away, and the battles here have a bracing edge, a sense of imminent danger. Lester doesn’t cut often, allowing the precision (or rumble-tumble recklessness) of each combat to be fully appreciated, in real time, by viewers. One stunt involving a cornered stag looks downright lethal; when it charges the nearest huntsman, I thought he was a dead man for sure.] 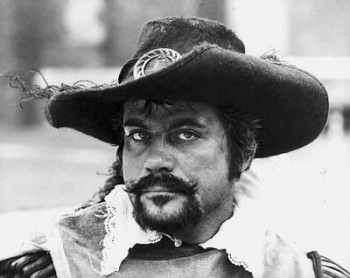 IMDB point the second: the whole project was originally conceived as a vehicle for the four Beatles! Incredible. Paul would presumably have played D’Artagnan? Yoko Ono as Milady D’Winter?

I’m very glad the Beatles never set foot in the musketeers’ high black boots, for I doubt that I would have found in them the same brand of sword-slinging inspiration. To this day, when writing an action sequence for any project whatsoever, on stage or on the page, I find myself musing on how Richard Lester & Co. would have staged things. My Black Gate fiction (see below) bears this out: my combat scenes tend to be messy, full of weather and props, a kind of comic chaos where lethal consequences dance cheek to cheek with the absurd.

For that, I will be ever in Lester’s debt. Dumas’s, too, I suppose, although I don’t recall the book ever having made me laugh.

Fact: I had fully intended to devote an upcoming post to the “sequel,” The Four Musketeers, released a year later, in 1974, but shot at the very same time as The Three Musketeers. Lester and producer Aaron Salkind pulled this off without the cast or most of the crew having the least idea that that was what was going on. Lawsuits ensued, keeping both Musketeers films off VHS and DVD for years. 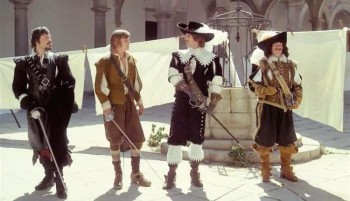 A deception unique in the annals of sound-era cinema? Very likely. It certainly led to the so-called “Salkind clause” in all current film contracts, whereby the producers guarantee they are filming only the script at hand, and not double-dipping. But, while I’d like to report that the results were worth the grift, I can’t: the second DVD in this set is so damaged, I might as well replace it with a vinyl LP.

So I’ll have to try again, at some later (much later) date.

Until then, “All for one and one for all!”

Mark Rigney has published three stories in the Black Gate Online Fiction library: ”The Trade,” “The Find,” and “The Keystone.” Tangent called the tales “Reminiscent of the old sword & sorcery classics… once I started reading, I couldn’t stop. I highly recommend the complete trilogy.” In other work, Rigney is the author of “The Skates,” and its haunted sequels, “Sleeping Bear,” and Check-Out Time. His website is markrigney.net.

These are two of my hands down favorite films. Great job letting folks know about them.

“Shall I cut his throat?”

I can’t remember, is that in Three or Four? I’ve encountered so many rpg adventurers with that attitude. 🙂

I do love the film, but give the weight of credit for its invigorating blend of action and humor to its screenwriter George MacDonald Fraser than to its director. This picture was not, as you yourself note, typical for Lester, but it is very much in keeping with Fraser’s Harry Flashman novels.

Added to the Netflix queue!

Did you see The Musketeer? Interesting (but not entirely successful) attempt to wed wuxia choreography to the Musketeer story. (Or vice versa.)

Heartily concur. These two films have to be the best of all attempts at the subject. Thanks for the info bytes very interesting.

I seem to recall a version of The Man in the Iron mask from around the same (movie) period where the musketeers make an appearance, any relation there?

Chamberlain played both the man in the iron mask and Dante in ‘The Count of Monte Cristo’ in made-for-TV versions of the books. He camps it up quite a bit in the first, but I used to love the second. Maybe that’s the connection? Tony Curtis plays one of the four who frame the unfortunate Dante.

Re ‘The Three Musketeers’ & ‘The Four Musketeers’: I saw both films as they came out – I was around nine or ten – and thought they were great, but haven’t seen them since. They have a knockabout flavour that is absent from the book but when I read the book years later I was struck by how closely the first film stuck to the plot and sometimes even Dumas’s descriptions: Milady’s execution is shot exactly as it is described, for example. The fact that Charlton wore a prosthetic nose in order to look more like Richelieu was something of a news item at the time.

️Very glad these films have made so many friends!

Regarding credit to Fraser, yes, good point. However, Lester is the director who took the energy of the French New Wave and made it world famous (via Hard Days Night). No small accomplishment. His stamp is all over the Musketeers movies.

I would say more but am using my phone and I hate text typing!

If memory serves me right, the two other Lester/MacDonald collaborations, Royal Flash and Crossed Swords, are pretty nifty as well. Both also feature the mighty Oliver Reed as well.

Ooh!
I didn’t know about those!

I see others have raised the George MacDonald Fraser flag already. So I’ll spare you my encomium to the compiler of the Flashman Papers. Let me note that if you enjoy watching Lester’s Three and Four Musketeers (as all right thinking people do) you’d probably get a kick out of reading Fraser’s “The Pyrates.”

One of the few films with Raquel Welch in which she actually does quite well. She should’ve done more comedy — or worked with more directors who knew what she could (and could not)do.

[…] as Otto von Bismarck. The director? Richard Lester, the very same Fraser collaborator who helmed The Three Musketeers. It’s a small world, after […]

I love all three films in Lester’s Musketeers Trilogy, including the rarely seen and very underrated third film, The Return of the Musketeers. Like The Godfather Part III, the third Musketeers film isn’t nearly as good as the first two, but also like The Godfather III, it’s actually very good. Not being great does not mean that it’s bad, something that I think a lot of critics forget.