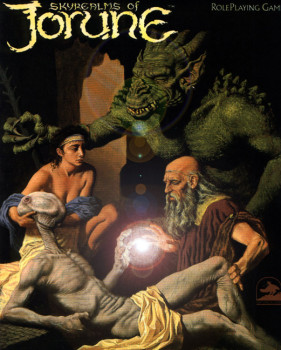 Dungeons & Dragons was the first roleplaying game I encountered – 35 years ago this month, as it turns out – and, except for a stretch during the 1990s, when I foolishly cast it aside, it’s remained my favorite RPG ever since. Nevertheless, it was never my only roleplaying game. Indeed, once my friends and I had been bitten by the RPG bug, we soon tried our hands at pretty much any game we could find.

In those heady days, we played a lot of games, not merely because we had voracious appetites for all things roleplaying, but because there were so many RPGs from which to choose. From our perspective, it seemed as if there were new roleplaying games appearing on hobby store shelves every month, even if an examination of the timeline of RPG releases reveals otherwise. At any rate, there were certainly more games released than we could possibly afford to buy, let alone play. Consequently, after periods of experimentation, we tended to stick toa  handful of games that became our standbys. It was to these games that our hearts belonged and that we spent untold hours playing together.

That didn’t stop my eye from wandering. Over the years, there were a number of games I picked up simply because they looked cool – so cool, in fact, that I didn’t actually care whether or not I’d ever get the chance to play them with my friends. Nowadays, I tend to look askance at such behavior. I find something perverse in treating a game simply as reading material, which is why I’ve been slowly paring down my collection only to those games I actively play or am likely to play in the foreseeable future.

And yet, hypocrite that I am, I’ve made a few exceptions over the years. My shelves are home to a handful of games I’ve never actually played (nor am I likely to), but that I keep around because I find them inspiring nonetheless. In my defense, each of the three games I discuss below is one that I’m not at all convinced can be played as written, at least not easily (a claim that will no doubt result in a flurry of comments from indignant middle-aged men regaling me with tales of their decades-long campaigns using one or more of these RPGs).

The first of my cool-but-unplayed games is Skyrealms of Jorune, which I am sure a great many roleplayers of my vintage will remember well from a series of evocative black and white advertisements in the pages of Dragon magazine. Skyrealms of Jorune was first published in 1984, though the edition I first saw – the second – came out a year later and was released in a gorgeous boxed set. The game was set on the eponymous planet of Jorune, home to several intelligent native species (like the Thriddle, depicted on the left). 150 years from now, humans from Earth colonize Jorune, bringing with them their technology and genetically engineered animal servants. They displace many of the native species and learn to manipulate “Isho,” a mystical pseudo-scientific form of energy fostered by the complex inter-relationships between Jorune’s many moons and the crystals in its crust. Due to some kind of disaster, the humans of Jorune are cut off from Earth and their civilization collapses, reverting to medieval levels of technology overall. After thousands of years, Isho takes on the role of magic and “Earth-tec” (the remnants of high technology) treated as magic items.

Skyrealms of Jorune presents a very fascinating world, helped in no small part by the amazing artwork of Miles Teves (who eventually went on to work in Hollywood). I was completely enthralled by the game’s setting and would have loved to have played it. Alas, I found its rules clunky at best and incomprehensible at worst, which dimmed the fire of my ardor. I could have adapted the setting to another rules set, but that’s not really my thing. I’ll tinker and house rule, of course – what referee doesn’t? – but I’m not a fan of the wholesale rewriting of rules, not even to use with a setting I found as intriguing as this one, which is why Skyrealms of Jorune continues to sit on my top shelf, gathering dust. 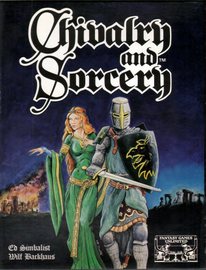 Second on my list is Chivalry & Sorcery, about which I have rhapsodized before (along with Space Opera). C&S is a game with which I had a very strange relationship back in the day. Most of the older guys I knew didn’t think much of it. They considered it too “nerdy,” which was saying something. By that, they meant that it was unnecessarily detailed and obsessed with “realism.” I think there’s some truth to that jibe, but that’s part of the reason why the game continues to hold such appeal for me.

Don’t misunderstand: I tend to play very “loose” with the rules of any RPG I play, but I can’t help but admire game designers who make an effort at “properly” simulating characters, actions, and events through detailed rules. I also appreciate it when designers put in the time to research a topic so that I don’t have to do so. I’m not convinced that the designers of C&S, Ed Simbalist and Wilf Backhaus, did the former, as the rules for many aspects of the game, particularly combat, are nigh unintelligible to me. I cannot imagine using almost any of the rules in C&S, but perhaps I’m slow.

However, on the latter point – providing the fruits of their research for my gaming delectation – they succeed wonderfully as far as I am concerned. I can’t tell you how often I flip through the rulebooks of Chivalry & Sorcery whenever I’m working on something that needs a hearty dose of medievalism. This is particularly true of the magic system, which, while its rules are hard to use, is nevertheless an inspiration. The game discusses mediums, shamans, alchemy, astrology, witchcraft, necromancy, and more. Its treatment of demons and the hierarchy of hell is equally stimulating.

But what I like most about C&S is the way its designers tried to provide a social context for everything, even magic and non-human races. Whereas D&D exists in a kind of fantasy Wild West largely devoid of any notion of governmental, religious, or social authority, C&S is all about that, making it clear that “adventurers” can’t just wander about engaging in larcenous mayhem without there being consequences to their actions. I’m unconvinced that C&S is actually playable as written, but it sure provides plenty of food for thought. 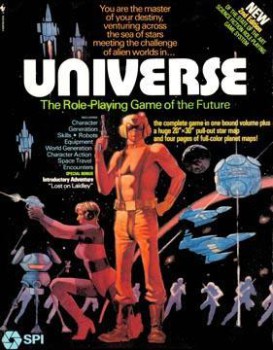 The final game on my list is Universe, which first appeared in 1981. Now, when it comes to science fiction roleplaying games, I was always a Traveller man. Even so, I was such a fanatic for the genre – I still am, truth be told – that I kept my eyes peeled for others SF RPGs that might appeal to me more. I never found one (which is why I had to write my own), but I did stumble upon Universe in 1982 or ’83 at my local public library, this being the Golden Age when roleplaying game books were that ubiquitous. I checked the one-volume softcover edition out so many times I might as well have owned it.

Unlike Skyrealms of Jorune, where the setting was the primary source of its appeal to me, or Chivalry & Sorcery, where it was the attention to socio-historical detail, Universe grabbed because of its rules – or, more specifically, its rules for generating alien worlds. The system provides all the usual details you could find in other planetary generation systems. What set it apart was the way that its system also aided you in mapping the surface of the planet, thanks in large part to a collection of easy-to-use map templates. It’s something I wished Traveller had had, as it would have made my refereeing duties much simpler.

The world generation system is delightfully elegant and a good example of the gems that can sometimes be found in otherwise unremarkable RPGs. That’s probably unfair to Universe, but only slightly. Most of its rules are arcane and wargame-y, as you’d probably expect from a design published by SPI. Never once in reading it did I ever say, “I must play this!” This is despite the fact that I spent many hours poring over the poster map of all the stars within a 30 light-year sphere of Earth that came with the rulebook. Universe is thus an almost perfect example of a RPG that exists solely to provide cool ideas for use in playing other RPGs.

What are the coolest roleplaying games you’ve never played?

Jorune, Talislanta, Empire of the Petal Throne. All of which I collect and read and admire, at least.

EPT is one of my favorite RPGs. I wish I’d owned a copy sooner, but I wasn’t able to acquire one till the ’90s.

It’s possibly my favorite world in all of fiction. I mostly knew it from reviews & articles in Dragon magazine, then one day I was browsing the SF section in the local Waldenbooks and saw this paperback called The Man of Gold …

The Man of Gold is a fun novel and a great introduction to the intricacies of Tékumel while still being accessible to neophytes. Flamesong is very good, too. I enjoyed the later novels, but they’re a lot less “newbie friendly” in my opinion.

I never have played Tekumel–but I’ve borrowed elements of it for other games that I have myself run.

Completely agree re: the novels. It’s a shame Daw stopped publishing them — I think the latter ones, although I enjoyed them, would’ve been much helped by good editorial oversight.

And speaking of Jorune, am I correct in remembering it was an outgrowth of someone’s Metamorphosis: Alpha campaign?

That is indeed correct. As I understand it, the setting is an outgrowth of Andrew Leker’s MA campaign, though it obviously diverged a lot from it. I think you can see the influence MA had most clearly in some of the engineered animal species, which I suspect were simply mutants in the original campaign.

I have a weakness for several gothic space RPGs that looked very cool, including Fading Suns by Holistic Design (first edition 1996). The setting was also used for a 1997 PC game called Emperor of the Fading Suns (which I never played either) and a miniature game (Noble Armada).

Jorune would certainly make my list. As would FASA’s MECHWARRIOR, and TORG by West End Games.

I adored Fading Suns (and even wrote for it) for many years and still retain a soft spot for it. I ran a couple of great campaigns using it. We had fun in spite of the rules, which were pretty clunky. One of these days I’ll play it again.

Shadow World from Iron Crown is another setting that I’ve always had a soft spot for, for no good reason I can put my finger on.

I had the good fortune to play in a Rolemaster campaign recently, with an experienced referee who used Shadow World as the setting. I’d never played RM before – in full; I’d used Arms Law years ago as a supplement to D&D – so this was a new experience for me. I found it surprisingly fun and playable. Shadow World, with its mix of fantasy and sci-fi, was rather nifty, too.

I can echo this. Also bought Jorune and never played it. Same goes for Talislanta. Harn World setting also have many if the resources but never played, although my brother ran a few adventures on our house world using HarnMaster and later a hybrid of HM and RuneQuest (3rd ed). Never owned Fading Sun’s but always admired it from a distance.