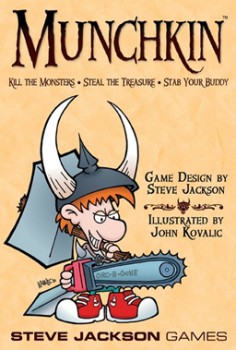 Today, we’re going off topic to talk about the funnest (Most fun? More fun than any other?) game I play, Munchkin.

Those of us old enough to remember micro games recognize the name Steve Jackson as the creator of OGRE. This tiny little “board game” with the flimsy cardboard pieces launched the micro game market. As the founder of Steve Jackson Games, Jackson has produced a great many board and role playing games, including his own RPG system, GURPS (Generic Universal Role Playing System).

Back in 2001, Jackson released Munchkin, a fantasy parody card game with the motto, ‘Kill the monsters, steal the treasure, stab your buddy.’ For several years, I looked down on Munchkin as a cheap attempt to cash in on the RPG field. Then a friend bought the original Munchkin game last year. Boy, was I wrong!!

Munchkin (which comes in several variations), is flat out the most fun I’ve ever had playing a board or card game. It can be played by two, but as I’ll explain below, it really only clicks with at least three. The ‘helping’ dynamic doesn’t have nearly as great an impact in a two player game and things can get a bit flat. But with a third, it’s no holds barred.

‘Munchkin’ refers to the players. Unlike a traditional RPG, there are no characters. Or, if you will, the player is the character. Who is a munchkin. Got it? 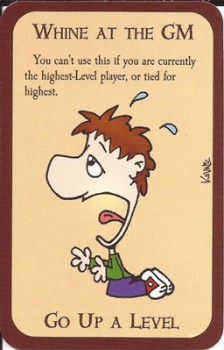 The first player to reach level ten wins. You go up a level by winning a combat. There are also “Go up a level cards.” And if you’re an Elf, you go up a level when you help a player, which makes accepting that help a double-edged elven blade…

With that, let’s start with the cards. There are two kinds: door cards and treasure cards.

Door cards include monsters, curses, classes, races, and enhancers. An enhancer adds to the combat strength for the player or the monster. Door cards can be good or bad.

Treasure cards include such things as armor, one and two hand weapons, enhancers, level up cards and the like. Treasures are good things.

Each player can have up to five cards in his or her hand at the end of a turn. There’s no limit to how many cards you can have in play in front of you, or off to the side in your backpack, available for use.

When it’s your turn, you kick down the door, which means take the top card of the door deck. If it’s a monster, you fight it, comparing its level to your combat strength. Let’s say I turn over a Level 8 Charybdis (a little Greek mythology there). My 14 wins the battle. EXCEPT:

The other players can play cards that either harm me or enhance the monster. Or even add another monster into the fight. Suppose someone plays a +10 to Monster card. Now, I’m losing 14-18. Each monster has “bad stuff” that happens if you lose the fight. In this instance, I would lose my armor (so I can swim away). 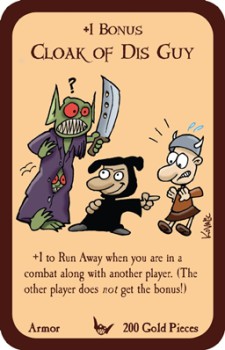 I don’t want to lose my armor. I can try to play cards of my own to increase my score to at least 19 or somehow decrease the monster’s score (ties go to the monster, except for special circumstances). Or I can ask another player for help. A player might offer to help on their own as well. Almost every monster gives you treasure cards for defeating it: the harder the monster, the more cards you get. So, a player may agree to help, adding their combat strength to yours. In this case, in exchange for the first pick of the two treasures: or maybe even for both!

If I don’t want to make a deal, and I can’t increase my combat strength or decrease the monster’s enough to win the fight, I can choose to run away. In most circumstances, that’s rolling a 5 or 6 on a six-sided die. Success means the monster goes to the discard deck and you don’t get a level, any treasures, or the bad stuff. Failing to run away means you get the bad stuff.

The interplay between players is what makes this game such a blast. Someone may bump a monster up, then offer to help for some treasures. That’s akin to setting you on fire, then offering to lend you their fire extinguisher in exchange for your wallet. Or if you run away successfully, they can play a Reloaded Die card and turn that 6 into a 1, giving you the monster’s bad stuff.

Alliances can shift from one turn to another. You might help someone, then turn around and screw them over one minute later. We frequently have three player games at lunch and two of us often gang up to slow down the early front runner and pull them back to the pack. But allies and enemies constantly change because it’s all about you winning the game.

Now, there’s a lot more to the game itself. There are classes and races, though you can go through an entire game without either. Throwing a curse at someone, forcing them to lose an item, is always a joy. Hoarding cards for future use versus selling them (you gain a level when you sell 1,000 gold pieces worth of items) is a strategy to master. There are lots of cards and they do lots of things. 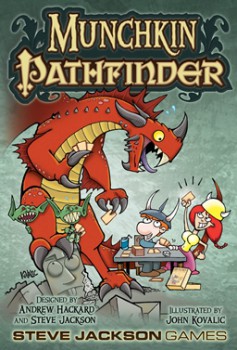 Since my friend had bought the original Munchkin set, I purchased the Legends edition (which is mythology, urban legend and fairy-tale themed) and the Pathfinder version. I think that the game play is pretty similar across versions, but there are all kinds of themes, including old west, marital arts, Cthulhu, zombie, pirate, spy, science fiction movies/TV, and even Adventure Time. Plus, there are smaller expansion decks for the various versions, as well as themes, like Christmas.

This game is all about humor. The artwork for almost every set is from John Kovalic of Dork Tower fame. The cards are often laugh out loud. The Wicked Witch of the Midwest (A Level 12 monster) has a picture of a witch flying a dog poop scooper, wearing an apron, holding a spatula and with a cheese-head witches hat. A Flying Monkey monster card can be played to help her without the required wandering monster card (little Wizard of Oz for you there).

I know one of my sets has Achilles Heels, which are +2 foot gear, wearable only by males, and depict an armored warrior in high heels. There are far too many examples in every set to cite here. And the rules (which are pretty simple) are even funny.

The original set has far and away the most commentary: pretty much all of it funny. My Legends and Pathfinder sets are still funny, but there isn’t as much on-card text.

One bit of advice: READ THE CARDS. After you’ve played several times, you’ll think you know what certain cards say. And guaranteed, you will either forget something or do something wrong. Just today at lunch, tied for the lead in the second-to-last round, I forgot that I could discard my Hireling for an automatic monster escape.

Instead, I tried to run away, failed, and died. I lost all my items and the cards in my hand. I did not win the game. Even if you think you know what a Necromancer does, read the card when you first put it in play. Trust me.

I can’t imagine anyone playing Munchkin with two friends and not enjoying it. We look forward to our ‘Lunchkin’ sessions. The shifting alliances, the humor on the cards, the ebb and flow of winning and losing: it is simply a fun, fun game. We often don’t finish in an hour and declare the leader the winner (though it is possible to get to level ten in an hour). But unlike many games, the experience of just playing is the real reward.

And he’s been an RPG fan and gamer since the seventies.

Yesterday, we got our lunch schedules coordinated and played (for the first time) a four-handed game. Even more fun and machinations!

One player killed two other players in the very first round. Those two never really got untracked (I think one remained first level the whole game: the other made it to second).

Which left me and the ‘player killer’ (PK) battling it out. Though neither of us made it past sixth level.

But with lunchtime about to end, we were on our last round. I was one level ahead of the PK. The first level player, still nursing a grudge over that first round death, agreed to help me to spite PK. I gained a level, held on through the rest of the round and won the game.

All that will be forgotten in our next game, but the shifting alliances really are fun.

Black Gate » Blog Archive » Get in the Dungeon with Munchkin #1

[…] card game that pokes fun at role playing, and especially gamers who play to win at any cost. In his review last year, Bob Byrne called it “the funnest (Most fun? More fun than any other?) game I […]

We still play Munchkin at lunch every so often. Today, for me, was an example of what a terrible game this can be.

I did not receive any items in the initial card draw. This can often be a crippling drawback. Yep. For the ENTIRETY of the game, I did not have any item.

For a brief time, thanks to a Level Up card, I managed a fighting strength of 2. But the eventual winner played a card that leveled him up and me down, so I was at a 1 for almost the entire game. And first level almost the whole game.

The one card I did play from my hand (+10 to Monster) backfired when he played a card that shifted the monster from him to me.

That’s it. He won, player #2 made it to ninth level and player #3 finished at second level, but he had items and activity throughout, at least.

I enjoy Munchkin, but once in awhile, a game is a complete disaster.

We played with the new Hipster expansion. That one is pretty amusing.

My 11 year old son spent last week at church camp. On the way home, he said, “Dad, we have GOT to buy Munchkin!”

He played it for the first time there and loved it. I brought my copy of Legends home from the office and now we’ve got some Munchkin going on at home. Woohoo!!!