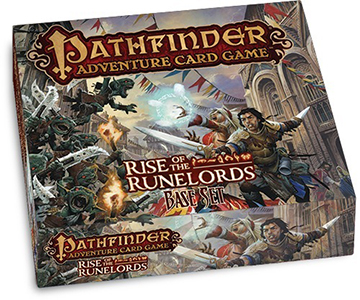 Fantasy board games have tried to capture the addictive nature of role playing for decades, but without much real success. In the past few years though, a number of dungeon-delving games have come close, including Descent, Talisman Fourth Edition, Castle Ravenloft, Legend of Drizzt, Claustrophobia, and a few others. In his recent review of Paizo’s second Adventure Card Game Base Set, Skull & Shackles, Scott Taylor fingered another contender, this one from Paizo:

Of late Paizo had expanded their market with several new product lines, the most intriguing of which are their Boxed Set Card Games. These sets ingeniously combine card building with role-playing with table-top (Think D&D meets Magic the Gathering meets anything done by Fantasy Flight!) Indeed, it is an amazing breakthrough by the Paizo design team, and guess what, it actually works!

Bob Byrne was even more positive in his assessment of the first title in the series, Rise of the Runelords, in his August article on “RPGing with a board”

By far, the best board/card game I’ve found that emulates the role-playing experience is the Pathfinder Rise of the Runelords Adventure Card Game. The adventures get more difficult, you level up and the gear gets better. You maintain your items, spells, and levels from scenario to scenario through an entire Adventure Path, rather than start over each game play session. I’m sure I’ll post on that excellent game in the future.

While I wait impatiently for Bob’s full review, I went ahead and ordered a copy. It arrived a few days ago and, while I haven’t had a chance to play a full game yet (mostly because I haven’t figured out how to do that without tearing the shrinkwrap), it looks very promising indeed.

Rise of the Runelords isn’t just a critical success — as far as I can tell, it’s also been a substantial hit. At the Fall Games Plus auction last month, it was a very hot item. Only a few copies came up for auction, and there was spirited bidding for each.

Definitely the biggest hit at the Paizo booth was the release of the first boxed set in the Pathfinder Adventure Card Game, a massive box containing nearly 500 cards. The demo area where they were running through the game was packed and I never actually made it into a demo slot, though I did watch a few of them. When I arrived on Thursday morning, there was a line nearly halfway down the wall of the Exhibit Hall, consisting mostly of people who were buying this game.

This isn’t a simple card game, but instead a roleplaying campaign in a box. It can be played by 1 to 4 players – that’s right, it can be played solo – who create a character, and then build a deck of equipment, allies, and magic to help progress through the events of Paizo’s classic Rise of the Runelords adventure path.

The game is built around a series of locations, adventures, and scenarios that mirror those presented in the adventure path. Players play through the events at the different locations, trying to defeat the villains and move along to the next location or scenario. Through the play, you gain additional equipment, allies, and other resources that you add to your character deck, growing in power to face future challenges. For more details on the gameplay, you can access the full rulebook through the Paizo website.

And while the initial box contains enough to keep you occupied and engaged for a long while, the story unfolds with expanded Adventure Decks that come out every two months. This adds a growth potential to the game, allowing Paizo to go through the adventures of two full adventure paths every year.

Paizo’s Rise of the Runelords adventure path (the pen and paper version which forms the inspiration for the board game) won a 2013 ENnie Award, as we reported here.

Bob and Andrew have both promised reviews, and I’m very interested in hearing their thoughts. If Paizo has really managed to capture much of the spirit of role-playing with a board game, I’m certain this will become a very popular game in the O’Neill household.

Pathfinder: Rise of the Runelords was published by Paizo in 2013. The cover price is $59.99, and multiple add-on packs are currently available, including The Skinsaw Murders Adventure Deck, the Character Add-On Deck, and many others.

I need to pull this off the shelf and go over the cards and rules again.

Of course, mine doesn’t have any shrink wrap…

Munchkin is the most fun game I play, but this one remains my overall favorite.

They just released character class decks, which I haven’t quite figured out yet.

I originally started RPGs with board games. The first one was The Sorcerer’s Cave, which was a tile-based dungeon crawl, in which you uncovered new passages as you went along, and encountered monsters you could fight for their treasure or even recruit into your party. The player whose party hauls the most treasure back to the exit wins. Must have been when I was 8 or so, and our parents had to read all the cards to me and my brother, since it was all English (which we didn’t speak).
Later there was Hero Quest, which I played only two or three games on one evening when I was 12. That was even more awesome, because it had little figures of actual heroes and monsters. Really cool game.

Not sure about other countries, but I think Hero Quest was really quite successful in Europe.

I have this game and love it. But I don’t think of it as a RPG-style game. For me, it’s more in line with something like Dominion/b>, which I also love.

@James – As I’m Grand Poobah of the RPG-camp for this game, I’m curious why you don’t consider it such.

@Bob–I don’t have some deep reason here. All I can say is that I just don’t approach the game in that way. It’s more of a strategy game for my group. It’s not that we’re against playing it as an RPG; it’s just that we don’t.