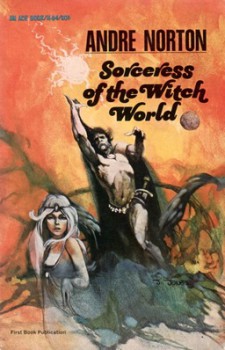 The heroes of the first two novels, Simon Tregarth and his wife Jaelithe, mysteriously disappear at the beginning of the trilogy. Their triplets, born between Web of the Witch World and this trilogy, are searching for them. Each volume tells the adventures of one of the siblings, Kyllan, Kemoc, and Kaththea.

In Three, brothers Kyllan and Kemoc rescue their sister Kaththea from her forced induction into the ranks of the Witches and escape into the magically hidden eastern land, Escore. In addition, the warrior Kyllan’s talents are put to the test against a growing horde of vile enemies. In Warlock, the scholarly Kemoc travels across dimensions to rescue his sister from her evil suitor.

You can probably tell from the title that Kaththea herself takes center stage in Sorceress of the Witch World. For reasons related to her situation in the previous book, Kaththea is spiritually damaged. Sadly, for the reader that damage seems to have rendered her a little boring also. She narrates the entire story in a dull voice that distances the reader from the action.

At the end of Warlock, Kaththea lost most of her magical abilities. Now, fearing that stripped of her defenses she is vulnerable to control by the powers of Shadow, she decides she must return to the West and seek guidance from the very same Witches from whom she once fled.

While trying to cross the mountains back into the West Kaththea’s party is caught in an avalanche. She is taken prisoner by a hunter from the Inuit-like nomads, the Vupsall. She manages to escape from the tribe during a bloody attack on their camp by raiders. Armed with magical knowledge gleaned from the possessions of the tribe’s wise woman, she makes for a great ruined city nearby. Hoping to escape the forces of Shadow she still fears, she enters an old dimensional gate. She doesn’t know what lay on the other side, only hoping it will be some sort of sanctuary. What she encounters are tremendous dangers in an utterly alien world.

This is a book I should have loved. Norton’s talent to create and describe imaginary cultures shines brilliantly in the passages about the Vupsall. The section concerning Kaththea’s captivity reads like the notes of an anthropologist. The treatment of war captives, the division of labor between the sexes, the death rites of the prestigious are afforded great detail.

We came at last to the site of the excavation. And those bearing the sled went down a side ramp of earth to the tent set up below, coming from that empty-handed. Once they had returned Visma and Atorthi raised their bubbling cups and drank as women who thirsted for a long time and were now given the sweetest of water. Still carrying the now empty cups they went hand in hand down to the tent and we saw them no more.

I did not realize the significance of what they had done at once, not until I saw those who held the sled dogs use their knives to kill quickly and painlessly. Then those furred servants were taken to join the human ones below. 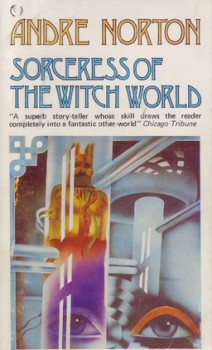 There’s lots of similarly detailed bits throughout the section, but the book isn’t supposed to be a travelogue of an imaginary land. The hero’s been taken prisoner and threatened with rape and, later, permanent servitude. But there’s barely a pulse in Kaththea’s retelling of her ordeal. There’s no tension, even when it seems clear from the text there’s supposed to be. Her conflicts with the the chief and later with one of his wives feel thin, and the worry she supposedly feels wasn’t conveyed to me at all.

It doesn’t help that Norton has her tell her story in a stiff, formal style that serves to put the action at a further remove. Kaththea describes a man she sees in a magical vision like this:

Rather did he retreat from it step by step, though I saw no sign that his confidence ebbed. I believe that he felt then some unease which kept him from any rash leap into the unknown. So he seated himself on a chair and sat there, looking at the gate… .

Too many fantasy writers have felt the need to write more formally in an effort to create a sense of remove from the real world, whether in time or in space. Now I don’t need, heck, I don’t want, every writer to sound like Glen Cook. But writing faux-archaic, formal prose is a difficult thing to do well and here it too often feels artificial. In Sorceress, a book filled with potentially stirring action, it siphons away the electricity of those scenes.

That said, there’s lots of things about Sorceress of the Witch World I like. As with each other Witch World novel I’ve read, Norton expands her world in colorful and exciting ways. The world Kaththea voyages to through the dimensional gate serves as a reminder that, while presented as heroic fantasy, these books are really science fantasy. For one thing, much of what passes for magical abilities are genetically inherited psychic talents.

I like that there are foes in Sorceress that hark back to the cyborg villains of both Witch World and Web of the Witch World. Kaththea lands in a world destroyed by an ongoing millennia-long war between two ultra-high-tech races, one living in giant towers rising above the ash-covered plains and the other bunkered down in deep shelters under the same land.

While used to the sight of the mutants and biological experiments that live in Escore, Kaththea is unnerved by the tower inhabitants: 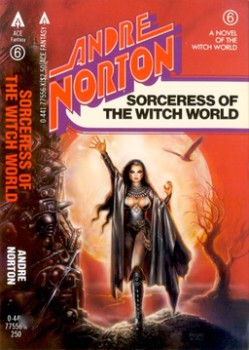 It was as if one had begun to make a machine which was also a man, metal and flesh grafted together. The lower half was an oval of metal, having no legs, though folded up against the ovoid shape were jointed appendages which ended in claws, now closed together as one might close fingers in a fist.

There were similar limbs on the narrower upper section of the body, but above that was a human, or seemingly human, head, though there was no hair, only a metal capping ending in a point.

And behind that ball-with-a-head came another mixture of man-machine, though this one walked on two legs, and had human arms. But the chest and the body were all metal, and the head again ended in a metal point.

As much detail as Norton provides for the tribal Vupsall, she also provides for the war-damaged machine world. Some of the best, and nearest to actually exciting, moments occur when Kaththea struggles to understand how the technology around her works and how she survives amidst numerous robotic hazards.

Which only makes me sadder as I’m forced to say Sorceress of the Witch World is just sort of dull. The preceding books in the trilogy suffered a little from the same sort of stilted prose, but in each case, Norton rose above its limitations and delivered stories of great immediacy and energy.

There’s also a terrible bit of deus ex machina business when the question of Kaththea’s missing parents is settled. Since the book is advertised as the conclusion of a trilogy I did expect their appearance, but the way it’s handled is disappointing. It’s a poor way to wrap things up.

This is the sixth Witch World novel I’ve read and the first that’s let me down in any sort of a way, so I won’t be abandoning the series. It’s not like I wanted to throw the book across the room or anything. I just wanted it to be more exciting and to live up to all the amazing plot elements and world-building that I’ve come to expect of Andre Norton’s fiction.

I’m glad I’m not the only one.

As fate would have it, “Sorceress” was the first Norton novel I would read. It has also been the last.

But it sounds as if I should give the author another try.

@ Ty – The setup in the preceding book is pretty important for this one. Still, it’s a disappointing finish to the trilogy.

The best place to start is with the short story collections Spell of the Witch World and Lore of the Witch World. Lore features “The Toads of Grimmerdale”, an especially creepy story orginally written for Lin Carter’s Flashing Swords #2.

I’ve got a couple of other Norton novels in my TBR pile. I’ve kept putting them off, so maybe it’s time to try again.

I have I think the entire Witch World series (except for maybe some of the later-era collaborations) in a series of extremely mismatched paperbacks. I know I made some progress into them several years ago; I should probably give them another go at some point.

I love Norton, but I was underwhelmed by the original Witch World, which is the only one of the series I’ve read. The whole thing just seemed clunky and wooden to me, especially the writing itself. My old Ace paperback has an awesome cover, though, and many years have passed – maybe I should give it one more try.

Andre Norton is definitely worth a second look, especially her older work. The Time Traders series is science fiction, but some of her best material. And while it isn’t part of any trilogy, don’t ignore “The Year of the Unicorn.” First-rate!