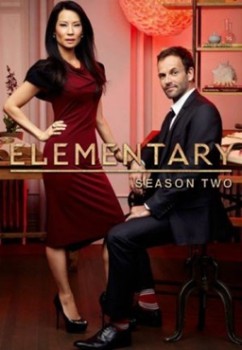 In September of 2012, Elementary debuted on CBS television in America. It was a modern day Sherlock Holmes series, set in New York City. It followed closely on the heels of the BBC’s Sherlock, which had aired three episode seasons in 2010 and again in 2012.

The BBC series was a clever updating of Arthur Conan Doyle’s original stories (at least, it was until the third season) and was full of Easter eggs to please old school Holmes fans (like me), while appealing to a new generation (including females who swoon at the sight of Benedict Cumberbatch: ‘Cumberbunnies’).

Elementary sprinkles in bits from Sir Arthur Conan Doyle’s works, but it’s really a police procedural with a Holmes overlay. I think it’s inaccurate to say it’s based on Doyle’s stories.

Holmes is a recovering drug addict who sleeps with women. Watson is, well, a woman who starts as Holmes’s life coach. Mycroft is nothing like the original and his relationship with Sherlock has even less to do with the stories.

Irene Adler and Moriarty were completely transformed. Gregson (who was the best of a bad lot) is actually a competent policeman, which is a nice change. On the other hand, there are bits for Sherlockians, such as Holmes keeping bees on the roof and being an expert single stick fighter.

There have been a few references to original stories, such as a cardboard box with an ear in it, and I recall one being similar to “The Problem of Thor Bridge,” but they haven’t really used the actual plots from Doyle’s sixty tales in a significant fashion.

In short, I don’t really consider Elementary a Sherlock Holmes television series on its own. But, having said that, I think it is a pretty good police procedural and I’ve watched every episode. Toss in a little bit of Holmes, and you’ve got a show made to appeal to the modern American audience.

Season three just got underway this past Thursday. When it’s done, Johnny Lee Miller and Lucy Liu will have appeared on screen as Holmes and Watson more than any other actors. How about that?

The very successful House was a medical procedural admittedly influenced by Holmes. Think of Elementary as another level up. I can definitely recommend the first two seasons.

I know quite a few Holmes fans who like Elementary and quite a few who don’t. I attended a Holmes conference a few months ago and one of the speakers lavished praise on Sherlock, while making snide remarks about Elementary. So, you’ve got a mixed response, I guess.

It’s Elementary – Wasn’t thrilled with a major change in the Holmes-Watson dynamic in the season three opener. Coming off the train wreck that was season three of BBC Sherlock, I’m worried at this start.

[…] With Elementary starting season three last week, The Public Life of Sherlock Holmes talked about the show this past Monday. […]