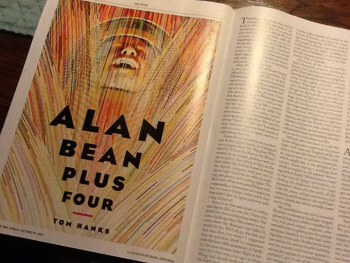 Michael Bishop, Nebula Award-winning author of No Enemy But Time, Ancient of Days, and Philip K Dick Is Dead, Alas, has posted a brief review of Tom Hanks science fiction story in The New Yorker magazine.

I read it with some initial skepticism. Sure, Hanks is an Academy Award-winning actor, but can he write?

Well, yes, he can. This tale works at the level that Hanks shoots for, and the prose, pointedly colloquial and science-savvy, shows him to have a fine command of 21st-century English as well as of current cultural, social, and technological innovations. I really like it.

You can read the complete story online here. There’s even an audio version on the same page (read by Tom Hanks. How cool is that?).

That’s funny – I always thought The New Yorker had a rigid policy of not publishing “genre” fiction, which is ridiculous if you think about it, because that’s all they ever published. It’s just that their genre was the “New Yorker Story”, a form as fixed and rule-bound as any. John Cheever and John Updike tales of suburban angst and infidelity are as anything that ever appeared in Startling Stories or Spicy Detective.

I missed a word there – they’re as artificial as anything in Startling Stories or Spicy Detective, I meant to say. (Which isn’t a knock on either the pulps or the New Yorker – I like “New Yorker Stories.”

The New Yorker has been publishing occasional SF stories for years now … I have even reprinted a couple in my Best of the Year books.

In fact, there is yet ANOTHER SF story in the issue right after the one with the Tom Hanks story (November 3, the food issue): “The Empties”, by Jess Row, near future post-apocalyptic stuff.

As for the Tom Hanks story — it’s not bad. It’s not awesome, either, and it’s really only kind of marginally SF. But Hanks definitely can write. As Bishop notes, the prose is colloquial, but well-done, and appropriate to the tone Hanks is shooting for.

Clearly I still live in the twentieth century!

If memory serves, The New Yorker had an entire science fiction issue a couple of years back. I probably have it laying around the house somewhere—the only issue of The New Yorker I’ve ever purchased.