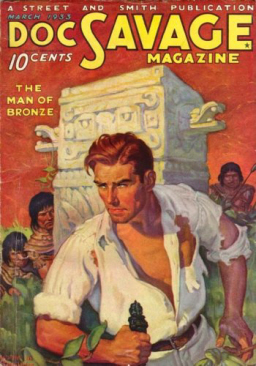 Today I’m turning over the Black Gate rostrum to the talented Jonathan Wood. Take it away, Jonathan!

Doc Savage is one of the most influential and poorly known literary characters of all time. Forget Cthulhu, if you’re really looking for a pulp-era monster that’s torn through 20th century popular culture, he’s your man. But you won’t know him, because when you do encounter him, he’s always in disguise.

But make no mistake, he’s there. Because he’s Superman. He’s Indiana Jones. He’s every chisel-jawed action hero you can name.

Seriously, what the A-Team needed a barn full of industrial machinery to invent, the Doc could probably do with a paperclip and some wax paper. He was the original infallible hero. Victory was assured.

And his true super-powers? Calisthenics and mathletics. This was pulp action madness at its deranged best. 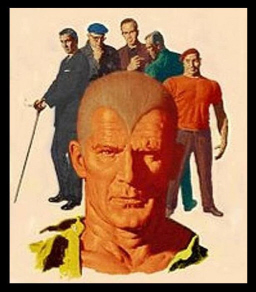 Still, just because Doc Savage could seemingly handle every problem single-handed, didn’t mean he couldn’t have a team of unlikely ruffians at his side. Lieutenant Colonel “Monk” Mayfair, an industrial chemist with a simian appearance (paging Beast from the X-Men, the 30s want their idea back).

Brigadier General “Ham ”Brooks — both the world’s best-dressed man and an attorney. Also wielder of a sword cane. Because pulp, that’s why, dammit.

Major “Long Tom” Roberts, another engineer who seems to mostly exist so that Doc Savage can be smarter than him.

And finally “Johnny” Littlejohn, who basically existed to say “I’ll be superamalgamated!” and things that were even less comprehensible. I’m not even sure that, “Because pulp” covers him.

Together, between 1933 and 1949, this group went out on over 180 adventures. The only real problem… pretty much all of them are completely unreadable. 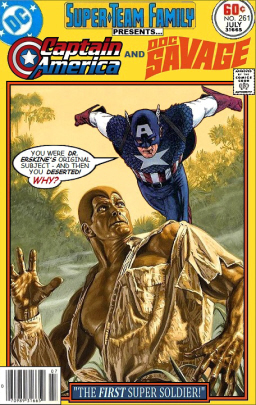 The pulp era is not necessarily known for its exemplary stylists, but Lester Dent, Doc Savage‘s primary writer, could torture a sentence like few others. Open one of his books and you’ll see language as blunt as Doc Savage’s fists lying in ugly splayed piles (not dissimilar to all of the Doc’s other enemies).

And yet, underneath the veneer of nearly indecipherable English… what mountainous ranges of adventure can be found. The plots of the Doc Savage books are vast, vaulting things, epic in their ambition, if not their execution.

In his adventures, Doc Savage traveled from his New York home to desert ranges, to pirate islands in the South China Sea, to Alaska. He fought giant spiders, Barons in black, jungle tribes. If there was the potential for adventure, and for fisticuffs, and for mad, mad science, then the Doc and his friends were there, ready to dish out justice with violent alacrity.

With so much potential, for me Doc Savage is best encountered in his alternate interpretations. There are two brilliant radio dramatizations floating around the Internet. Also there are many, many comic books. DC has collected a large number of them in a single, vast tome. You really haven’t lived until you’ve flicked through the pages of an attack by… “The Ani-men!” (Seriously, it’s glorious).

In these iterations, the action, adventure, and deranged inventiveness remain, but some of the rougher edges are smoothed away. These are projects created with love. Because that’s what Doc Savage inspires, and continues to inspire — any time spent with him, and you just can’t help but want to get into a super-powered blimp to fly off with the giant golden lug.

Jonathan Wood is an Englishman in New York. His debut novel, No Hero, was described by Publisher’s Weekly as “a funny, dark, rip-roaring adventure with a lot of heart, highly recommended for urban fantasy and light science fiction readers alike.” Barnesandnoble.com listed it has one of the 20 best paranormal fantasies of the past decade, and Charlaine Harris, author of the Sookie Stackhouse novels described it as, “so funny I laughed out loud.” He can be found online at jonathanwoodauthor.com

Ah, I read through a pile of the Bantam paperback reprints (the ones with the awesome James Bama covers) in my misspent 1970’s youth. Now, once or twice a decade I pick one up and read it, and it’s always the same – during the preceding years I’ve somehow managed to forget that these stories are NOTHING BUT PLOT. No atmosphere, no character, no observation or offhand pleasures or anything but PLOT. A little dab’ll do you, as they say; thanks for the memories, Doc, and I’ll see you in 2022.

I enjoyed the Savage stories as a kid. I think that Clive Cussler’s Kurt Austin books are sort of a modern day equivalent of them.

And though I wasn’t too crazy about them, Hard Case Crime had different authors write a very Savage-like series about Gabriel Hunt.

How could you forget the *movie*, Jonathan? 🙂

I haven’t actually read any Doc Savage, but I did like the Lester Dent master plot generator:

(And based on what you say about his writing style, it’s all starting to fall into place …)

Also, am I the only one taken aback by seeing Captain America in a DC comic?

Well, there was the Justice League – Avengers crossover of several years ago, perhaps the greatest example of panel-cramming in comics history…

Re the calisthenics – in the movie, Ron Ely does calisthenics by the poolside while some maids ogle him from a nearby window. Nice to see the director being so faithful to the original character!

LOVE THAT DOC SAVAGE, been readin’em since I was a kid back in mid-60’s and STILL enjoy them. Lester Dent was a genius at developing stories and plots even as he was working at prospecting, treasure hunting, exploring on his boat and generally adventure on his own. Very disappointed with the George Pal “Doc Savage” movie, it was a joke and financial disaster–the actors did not fit the parts and Ron Ely wasn’t much help as Doc. Hollywood’s been hinting at a new Doc movie some time in future, I just hope it’s handled as well as Spielburg did the Indiana Jones movies. 72 YEARS and still going strong, that’s Doc Savage–arriving in ’33 when KING KONG first hit the movie theaters.

I really liked the B&W magazines that Marvel came out with.