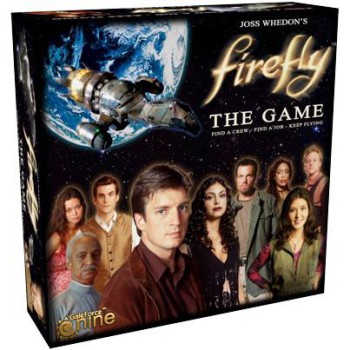 Ever want to just buy a ship and take off into the night sky, making your own rules and living a life that was truly free? Firefly: The Game (Amazon) gives you the chance to do just that, if you think you’re up for it.

On the off chance that you’ve been in a coma for the last decade: Firefly was a tragically short-lived television series created by Joss Whedon. After his success on Buffy: The Vampire Slayer and Angel, he turned to science fiction, creating a series that can best (but simplistically) be described as “cowboys in space.” The series centered around a spaceship crew living on the fringe of society, taking jobs of questionable legality while trying to stay off the radar of the government. It was cancelled before all 13 of the episodes even aired, but fan enthusiasm resulted in a feature film, Serenity, that gave some measure of closure for fans.

But, as so often happens in our little world of fandom, even that was not the end of the story. In a few short episodes, Joss Whedon had created a rich and dynamic universe of rugged heroes who traveled the expanse between worlds just trying to find a job, work the job, get paid, and keep flying. It has continued in a number of forms, from comic books to board games. As I’ve mentioned before, my shelves contain a number of these related materials. (More than I typically care to admit.)

I first encountered the game at 2013 GenCon, where one of the lead designers walked me through a demo game, and I instantly fell in love with it. The game’s tag line sums up the overall theme: “Find a Crew. Find a Job. Keep Flying.” Those three phrases cover a lot of ground, though, and this game has so much going on that can keep players engaged. I’ll go over some of the key elements of the game, but from here out I’m going to assume that readers are familiar with the series. (Seriously, if you aren’t, go watch it now. Links at the bottom of the post!)

At the most basic level, each turn consists of the player taking two actions from the following options: Fly, Deal, Work, or Buy. This makes the game move at a decent clip, despite the fact that these four actions mask several strategic choices. For an idea of how diverse your options are for these four actions, I’ll begin by letting the play area speak for itself:

The Fly action involves moving your ship across the board, which represents space divided into two broad regions: Alliance Space and Border Space. These regions each have their own “navigation decks,” so as you travel through the region you flip over the card for that region. If you’re lucky, then you “Keep Flying.” If not, you may get the opportunity for a salvage mission, a rescue mission, or some other encounter, usually fairly unsavory. The worst case scenarios are that you’ll run into the Alliance Cruiser in Alliance Space (annoying, especially if you’ve got warrants out on your ship or crew) or a Reaver Cutter in Border Space (unless you pull off a Crazy Ivan, someone’s gonna die … maybe your whole crew).

You can avoid flipping navigation deck cards by moseying along slowly, but that takes significantly longer to get anywhere. So the simple act of moving is a major strategic choice in the game. Is it better to travel Border Space or Alliance Space? Should you mosey or risk a “full burn” to get the mission completed more quickly?

And, of course, one of the major factors in planning out your strategy depends on where you’re going and what you plan to do when you get there.

There are 4 planets on the board that contain a contact, such as Patience, Badger, or Niska. (Harken is also a contact you can gain on the Alliance Cruiser.) You travel to one of these locations to “Deal” with the contact to get jobs, signified by the five piles of cards on the right-hand side of the board in the picture above. There are a range of various jobs: smuggling, transport, crime, and so on. Some are legal, some are illegal, some are immoral, and the game has various mechanics to force consequences for the jobs you choose. For example, “Moral” crew members like Malcolm Reynolds or Shepherd Book become demoralized if they successfully complete an immoral mission. (Jayne Cobb, of course, doesn’t care what the job is.)

As you complete jobs, you get “Solid” with your various contacts. This gives you the ability to cut deals with them, selling extra contraband and cargo that you might gain in your travels, or possibly clearing warrants that have been issued for your ship.

Getting a job’s the easy part, but you also have to Work the job to complete it. Jobs usually involve going to one planet to start the job and going to another planet to finish it, such as transporting slaves or medical supplies, although some jobs are simple one-stop affairs, like a robbery. Some jobs involve carrying Cargo, Contraband, Passengers, or Fugitives, all of which are tracked by tokens that can be lost through various in-game encounters. If you have a hold full of fugitives, you might want to move along Border Space to avoid running into the Alliance Cruiser and losing them all … although Reavers will kill them all, so nothing’s a sure bet.

Completing many jobs involve skill checks. The three skills are: Fight, Tech, and Negotiate. Sometimes to even attempt a job you’ll need to have a minimum level of these skills, and completing a job often involves pulling from the “Aim to Misbehave” deck, which throws unexpected hurdles in your way. The simple job of beating up some local thugs can be halted by a security checkpoint, forcing you to pause in a lucrative job to go off and hire some negotiation-savvy crew or buy a Fake ID.

The other planets of particular interest are the 5 planets where you can buy equipment, hire new crew members, upgrade your ship, stock up on fuel, buy extra ship parts, and so forth. These are the card piles on the left-hand side of the board. This is a particularly important aspect of the game because completing your missions often rely on completing skill checks, which are easier to beat if you have crew and equipment that diversifies your skill set. Some jobs pay extra if you have crew members with a specific occupation, such as a medic, a soldier, or even a companion. With a high enough bonus, it can be worth it to swing by and hire a cheap mercenary to increase the payout of the job, even when you take their cut into account.

At this point, you might be wondering: Hold on, what’s the point of this game, again?

And the answer is: Well, that depends.

The game comes with a deck of 6 Story Cards that outline different victory scenarios. One of these cards outlines a solo play variant, where you have 20 turns in which to achieve one of three goals. But the other 5 cards outline different scenarios for multi-player competitive games. Some require completing multiple pre-set jobs (often requiring a fair amount of money and multiple skill checks) to win the game. Two of the scenarios involve trying to end the game with the most credits, thus proving themselves the most “respectable” person of business or the nastiest desperadoes in the ‘verse. I don’t have the expansions yet (they’re coming), but I assume they will include even more victory scenario cards, but even the 6 that come in the base game allow for an incredible amount of diversity in how the game plays out, since all of the missions, crew, and equipment are entirely different each time you play. And, of course, you can certainly decide to set your own victory conditions, such as “The first person to complete 20 jobs.”

Once you’re familiar with the rules and general play, a game of Firefly takes about 2 hours or so, although the first couple can definitely go longer as you try to sort out how all the different pieces of the game work together. In part, though, I’ve found that this is because everyone is having so much fun running around, completing missions, pimping out their spaceship, and trying to hire their favorite crew members that they often forget they’re supposed to be trying to achieve the victory conditions!

Overall, though, this is one of the most fun games I’ve come across in a long time. My wife, who tends to prefer games that are done in less than an hour, loves playing Firefly. And the game is definitely fun on its own merits, even for those who aren’t die hard fans of the show. I played it with someone who hadn’t watched any episodes of Firefly and he loved the game, then went out and watched the series.

So it’s not only a game: it’s a public service!

I’d be remiss if I didn’t mention the latest addition to my Firefly memorabilia: this adorable little Captain Malcolm Reynolds vinyl figure, offered as an exclusive through the Loot Crate subscription service in their “Galaxy” themed crate.

Next Friday, though, we’ll take a look at some of the Firefly comic books.

In the meantime, here are some more great Firefly-related links:

Andrew Zimmerman Jones is a writer of fiction and non-fiction. In addition to being a contributing editor to Black Gate magazine, Andrew is the About.com Physics Expert and author of String Theory For Dummies. You can follow his exploits on Facebook, Twitter, and even Google+.

very good review. This is the most positive one i’ve read yet. There are already two expansions out for the game and both have gotten better initial reviews than the game itself.

If it had a different theme would the length of play have hurt the game more for you?

Excellent question. I’m sure that loving the theme helps, but as I said in the review, I do feel that the game is solid entirely on its own merits. I have played it with someone who was familiar with Firefly but had never watched it, and they enjoyed the game tremendously even with no emotional connection to the setting/theme.

But then I’m not someone who has a problem with playing a 2+ hour long game … it’s pretty much my idea of a perfect social evening.