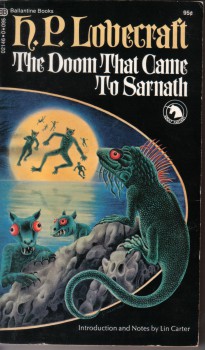 The Doom That Came to Sarnath was the second volume of H. P. Lovecraft stories published under the BAF imprint. It served as a bridge between the Dunsanian fantasies of The Dream Quest of Unknown Kadath and the Cthulhu Mythos related titles that followed.

Many of the stories in this volume weren’t published until years after they were written or were published in amateur press publications of the day. These days, we’d call them fanzines. The contents include the aforementioned Dunsanian fantasies, some traditional horror stories, and some early Mythos tales. Also included are a few prose poems and one selection of Lovecraft’s verse.

Rather than give a brief description of each of the 20 items in the book, I’ll highlight some of the ones I liked best, then offer some general thoughts. Carter broke the selection up into groups loosely based on either chronology or theme. I’m not that organized.  I’m also not a Lovecraft scholar, so I’m not going to comment much on the specific chronology  of the stories or try to get into the nitty gritty of Lovecraft’s authorial evolution.

“The Doom That Came to Sarnath” was the story I was most familiar with; I’d read it years ago in 7th grade. It’s an effective little horror story, and while it might not be all that ground-breaking, I think it succeeds in what it sets out to do.  I still remember it after all these decades.  In fact, I remembered it better than much of the stuff I’ve read in the last month.

“The Tomb” is a traditional horror tale about a young man fascinated by an old tomb. The stories that follow are journeyman work and, with the exception of “Nyarlothotep”, nothing really outstanding.  (I realize some of you may have quite different thoughts.) “Nyarlothotep” tells of a man who comes out of Egypt to be stage performer, but his performances take you places you really don’t want to go.

It’s not until “The Festival” that we begin to see some hints of the work that is to come later in Lovecraft’s career. This is the story of a man who returns to the city of his ancestors for a festival that occurs once every century. He knows very little about the ceremony, which turns out to be unfortunate for him. This is one of the first (if not the first) mention of The Necronomicon and Miskatonic University.

“The Nameless City” finds an explorer in the Arabian desert coming across a lost city among the dunes.  He discovers there’s a reason the city is abandoned.

The other two stories that I particularly liked were collaborations. The first is pure science fiction. It’s “In the Walls of Eryx,” written with Kenneth Sterling. In this one, Earthmen are harvesting some type of crystals on Venus for power. The problem is that the native population, a race that the narrator describes as “man-lizards”, consider the crystals to be sacred. The few men on the planet have to hunt far and wide to find crystals that the natives aren’t already worshipping. In the story, a prospector finds a crystal of extremely high quality, the best he’s ever found or even heard of. It’s clasped tightly in the hands of a corpse lying in the mud behind an invisible barrier. The prospector manages to find a door and goes in to retrieve the crystal. Once inside, he discovers that he’s in a maze, one that he can’t see and can’t seem to find his way out of.  Then the man-lizards show up…

“In the Walls of Eryx” is probably my favorite from this collection. It’s not like any of the other stories. Rather, it’s got a protagonist who doesn’t go mad from cosmic horrors, but does his best to solve his problem. The feel is very much a science fiction story from the 1920s and 1930s (which it is). That’s not a bad thing in this case.  While the prose is a bit more elaborate than what you see these days, that sense of wonder is there.  Frankly, I’m willing to trade ease of reading and beauty of words for sense of wonder.  Maybe I’m getting old and nostalgic, but this one reminded me  of the pulp reprints I read as a teenager.  I’m not sure to what extent this tone is due to Sterling’s contribution. Carter doesn’t say, although he does say that Sterling was still alive and attending conventions when The Doom that Came to Sarnath was published.

The final story in the book is “Imprisoned with the Pharoahs.” It’s based on a story Harry Houdini told to the publisher of Weird Tales that Lovecraft wrote up for the magazine. The narrator in this one is never named, but the story is told in first person and was published as by Houdini. Draw your own conclusions as to who the narrator is supposed to be. And the story may have some limited basis in truth, at least as far as the setup is concerned.

In it, a stage magician and escape artist is lured by his unscrupulous guide to the pyramids after midnight, supposedly to see a fight between the guide and another man. It’s all a setup. The narrator is captured and dropped bound, gagged, and blindfolded into a secret chamber beneath the Sphinx. There he encounters horrors from the nation’s ancient past.  Up until his capture, it sounds like a misadventure Houdini might have had while traveling abroad.  The rest is clearly made up.

In these stories, it’s easy to see Lovecraft developing as a writer. Most of the tales aren’t long, not more than a few pages. “In the Walls of Eryx” and “Imprisoned with the Pharoahs” together constitute 60 pages of the 206 page volume. Carter does a good job of introducing the stories and putting them in some context of Lovecraft’s life. As I mentioned above, many of the stories were written years before they saw widespread distribution. By widespread, I mean publication in a venue other than the amateur press.

There are no great classics here, and many of the short pieces are quickly forgotten soon after reading them. Still, there are enough chills and lurking terrors to make this a good little collection for Halloween. Carter takes pains to point out Lovecraft’s move away from Dunsanian fantasy to the Mythos stories he’s best remembered for today. 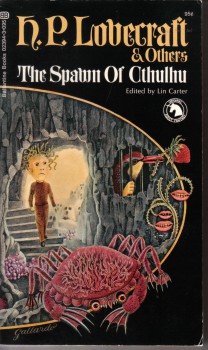 Speaking of Halloween, I’m going to try to finish another BAF volume before then. I’m not sure if I can make it, but I’ll try. The Spawn of Cthulhu contains not only Lovecraft’s “The Whisperer in Darkness,” but also Mythos stories by other practitioners of the weird tale.

Previous posts in this series are:

Lin Carter and the Ballantine Adult Fantasy Series
The Blue Star by Fletcher Pratt
The King of Elfland’s Daughter by Lord Dunsany
The Wood Beyond the World by William Morris
Lilith by George MacDonald
The Silver Stallion by James Branch Cabell
The Sorcerer’s Ship by Hannes Bok
Deryni Rising by Katherine Kurtz
Land of Unreason by Fletcher Pratt and L. Sprague de Camp

Keith West blogs way more than any sane person should. His main blog is Adventures Fantastic, which focuses on fantasy and historic fiction.

In Gallardo’s painting for the Sarnath book, don’t you like those funky, jivin’ dudes against the backdrop of the moon? : )

I recently bought these old BAF editions of Lovecraft. I hadn’t really sat down and looked at what was in each one of them.

This is an interesting collection in that it seems to be most of the least well-known of the Lovecraft canon. Interesting that Carter felt the need to have a volume with these particular stories.

Thanks for doing this giving us this Halloween treat westkeith!

Major Wootton, I love Gallardo’s covers for the Lovecraft volumes. They’re among my favorites in the entire series.

James,you’re quite welcome. I hadn’t looked that closely at them either, or I probably would have started with a different volume, one that focused more on the Mythos. I’m glad I didn’t, because I really enjoyed some of the more obscure tales in this one.

Well, I think these particular stories, together with the ones in Kadath (which may be my favorite piece of Lovecraft’s fiction, depending on a multiplicity of factors including when you ask me) are the most appropriate within the context of the Ballantine Adult Fantasy series even if they’re not the sort of thing he was best known for …

Joe H., you make a very good point. I’ve not read the stories in Kadath, but after reading the non-Mythos tales in this book, I’m looking forward to giving them a try.

My Halloween Posts Creep into Other Blogs | Adventures Fantastic

[…] afternoon, my latest went live.  It’s over H. P. Lovecraft’s The Doom that Came to Sarnath.  This is a collection of stories written as Lovecraft was transitioning from fantasy in the vein […]

Also, I think (and this is based primarily on some of John’s vintage paperback articles) that most other Lovecraft was already available in paperback at the time these books were published.

I’ll be very curious to hear what you think of Kadath when the time comes.

(And my own first copy of Sarnath was the 1980s Del Rey edition with the Michael Whelan cover; it matched my copy of Mountains of Madness, but the rest of my paperbacks were a mishmash.)

Joe H., you raise a good point about what was already available in paperback at that time. I hadn’t thought about it that way’ I just assumed the rights weren’t available for much of Lovecraft’s other work and didn’t consider why that would be the case.

Kadath is coming up soon. After I finish Spawn of Cthulhu, I’m going to go back to taking the titles in order (more or less). I’m going to skip the Cabell titles for now and read Lud in the Mist. After that, it’s the first Dunsany collection and Phantastes. Kadath is after that.

And those Whelan covers were cool.

Joe H: The stories in this volume are the “most appropriate within the context of the Ballantine Adult Fantasy series even if they’re not the sort of thing he was best known for”

When I first read Lovecraft, I hadn’t read any Dunsany. Now you’ve articulated for me why I liked some of Lovecraft’s stories so much more than others. Dunsany’s exactly to my taste, Lovecraft less so. The more Dunsanian the Lovecraft story, the more I enjoyed it. The mythos stuff always read like unintentional comedy to me.

Thank you again for a wonderful series of posts.

Thanks for the kind words, Sarah. Have you seen the Dunsany reread that Howard Andrew Jones is doing on his blog?

Blog Watch: The Face in the Frost, Dishonest Fascists, Tulkinghorn, and the Death of Play | Jeffro's Space Gaming Blog