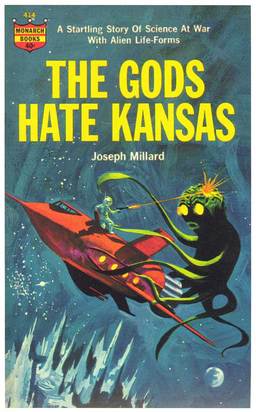 With my Vintage Treasures posts, I like to showcase the best overlooked fantasy of the past half century or so. American fantasy is an enormously rich genre, but it also has a notoriously short memory, and there are countless buried treasures to rescue from undeserved obscurity.

Of course, sometimes I like to forget all that and just showcase the weird.

Joseph Millard was an American pulp science fiction writer who published nearly a dozen short stories between 1941 and 1943, and then apparently gave up writing for good. Most of his stories appeared in magazines like Thrilling Wonder Stories, Amazing Stories, Fantastic Adventures, and other pulps. He died in 1989.

The cover isn’t the only brilliant thing about this novel. There’s also the title. Why do the gods hate Kansas? What the hell did Kansas do, anyway? It’s one of those questions that brings you back to the paperback rack next to the checkout lane for a second look. Just 40 cents and the answer could be yours.

The Gods Hate Kansas is a novel of alien invasion, with a plot mostly stolen from The War of the Worlds and The Puppet Masters. Strange meteorites land in Kansas, and the first people to investigate are…. changed. Soon the world is nearly overrun by an alien invasion and it’s down to our hero, an astrophysicist named Curt Temple, to set things right.

The Startling Stories cover is by Rudolph Belarski and the Fantastic Story by Earle K. Bergey.

Here’s the delightful blurb from the back of the 1964 paperback:

The Gods Hate Kansas was made into the 1967 British science fiction movie, They Came from Beyond Space, directed by Freddie Francis and written by Milton Subotsky, which may be just as obscure as the book. I’ve never heard of it, but I love the posters, with their stylish goggle headwear.

The Gods Hate Kansas was never reprinted, which perhaps was for the best. It remains a strange relic of American fantasy, which paperback treasure hunters stumble upon from time to time in used book stores.

The Gods Hate Kansas was published in February 1964 by Monarch Books (Monarch Books #414). It is 126 pages, originally priced at $0.40. The cover is by Jack Thurston. I bought my copy last month as part of a collection for about 60 cents.

Millard may have given up SF in the ’40s, but he or someone with the same name was writing for decades afterward. He wrote and edited several Gold Medal books in the ’50s, including House of Evil, a paperback novel told in comic-book panels. He also wrote comic books.

It should be hanging in the Museum of Modern Art – either the painting or the artist, I’m not sure which…

I’ve always wondered what is “beyond space.”

> He wrote and edited several Gold Medal books in the ’50s, including House of Evil, a paperback novel told in comic-book panels.

Good catch! Is there a list of them anywhere? ISFDB only lists his SF work.

> It should be hanging in the Museum of Modern Art

> I’ve always wondered what is “beyond space.”