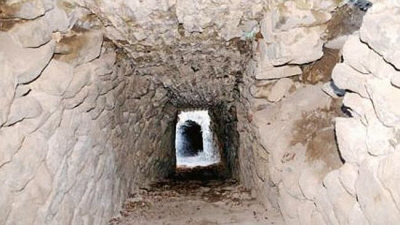 As if in response to the modern day bastardization of the vampire image (flannel shirts, shunning blood-drinking, etc., etc.), Dracula himself has started popping up everywhere.

First, in June come the report from the University of Tallin that Vlad Dracula’s final resting place was likely not in the ruins of a Romanian monastery, but was instead in a Neapolitan chapel.

A winding maze of secret dungeons and tunnels has been discovered beneath Tokat Castle in Turkey during restoration work on the site.  The ruins of the castle are located in the northern town of Tokat and these hidden cells may have been where Vlad Tepes himself was held hostage during the 15th century.

“The castle is completely surrounded by secret tunnels. It is very mysterious,” says restoration archaeologist İbrahim Çetin, who is working at the site.  He went on to tell the Daily News that one tunnel found is believed to have been used to reach nearby Roman baths. The dungeons, Çetin told the paper, were “built like a prison.”

“It is hard to estimate in which room Dracula was kept,” he said, “But he was around here.” 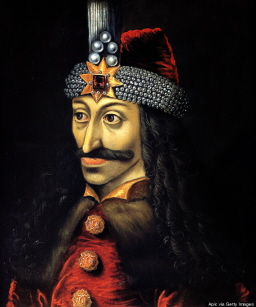 Towards the end of the 12th century, the town of Tokat was conquered by the Seljuk Turks and became part of the Ottoman Empire in 1392.

Vlad II Dracul was the ruler of Wallachia, a principality located to the south of Transylvania. Vlad II was granted the surname Dracul (“dragon”) after his induction into the Order of the Dragon, a Christian military order supported by the Holy Roman Emperor.

When Vlad II was called to a diplomatic meeting with Sultan Murad II in 1442, he brought along his young sons, eleven-year-old Vlad III and seven-year-old Radu.  But the meeting was actually a trap: all three were arrested and held hostage. The elder Vlad was released under the condition that he leave his sons behind as political collateral and it is during this time that the brothers were believed to have been held at Tokat Castle.

Under the Ottomans, Vlad and his younger brother were tutored in science, philosophy, and the arts — Vlad also became a skilled horseman and warrior. According to some accounts, however, he may also have been imprisoned and tortured for part of his stay at Tokat Castle, during which he would have witnessed the impalement of the Ottomans’ enemies.

The rest of Vlad’s family, however, fared even worse. His father was ousted as ruler of Wallachia by local warlords and then killed in the swamps near Balteni, Wallachia, in 1447. Vlad’s older brother, Mircea, was tortured, blinded, and buried alive.  Now the oldest living son, Vlad III inherited his father’s title and became Vlad Dracula or “son of the dragon.”

Whether or not these events turned Vlad Dracula into a ruthless killer is a matter of historical speculation. What is certain, however, is that once Vlad was freed from Ottoman captivity shortly after his family’s death in late 1447, his reign of blood began. 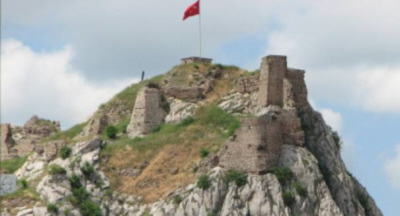 If this is indeed the place where Vlad the Impaler spent his formative years, it has yet to become of any interest to tourists.  It took quite a bit of digging to turn up a guidebook that even mentioned the location:

Ascent to the Citadel of Tokat: (unfenced site, no specific opening hours or admission charge).  From where the road ends there is a ten minute scramble up through the walls to the highest point for the best views, marked by a flag pole.  The area of the castle is surprisingly large and the walls and towers are extensive but heavily ruined.  The grassy summit makes a lovely picnic spot, with superb views down to the river and the town.

Is it just me, or considering what all happened, is the idea of picnic-ing here just a wee bit skeevy?

Creepy and awesome isn’t it? 🙂