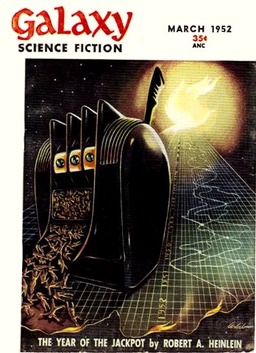 The March, 1952 issue of Galaxy opens with a word from the editor, H. L. Gold. Gold introduces Willy Ley, who’s beginning his monthly department, “For Your Information,” that will vary from complete articles to brief reports on “significant developments in science.”

Along with the introduction, Gold states that a number of readers have asked what he’s like, so shares some details. Of his name, he writes, “Named H(orace) L(eonard) after a prompt casualty in the Princess Pat Regiment. I can’t pretend to be fond of my name, but I don’t use initials to escape it; that was decided upon by an editor, though other editors have used the whole thing. Having had 32 pen names, I find the problem shrug-worthy.” 32 pen names? Was he going for a world record?

About Galaxy, Gold writes, “Galaxy, of course, is my own dream come true. I know I sometimes push too hard, but that’s because everyone wants his dream to be perfect.” I’m glad he did. It was a good dream.

“The Year of the Jackpot” by Robert A. Heinlein — Potiphar Breen is a numbers guy — statistician, analyst, or any role where he can use his skills in numbers and patterns. The latest pattern is an increasing number of odd behaviors, such as women publicly disrobing for no apparent reason. He interviews one of the women, Meade Barstow, and the two of them begin meeting routinely. When the statistics show the approach of an unknown climactic event, Potiphar and Meade flee the city, hoping to avoid becoming a statistic of their own.

I couldn’t quite buy in to the premise of the story, but I let that go. It does move along pretty quickly, and when things start to go bad, they go really bad. And by that point, the predictability of it all isn’t as important as pure survival.

“Manners of the Age” by H. B. Fyfe — Robert is one of the last humans to remain on Earth (others have left for the stars), and robots provide for all of his needs. Beyond the long-distance people Robert communicates with, he picks up a new station from a woman named Marcia-Joan. Robert decides to visit her, but the visit couldn’t seem to go worse — she doesn’t have a pool, her robots won’t listen to him, and she has the nerve to do things on her own schedule rather than his.

There was some decent humor in this tale, and I found it entertaining enough.

“The 7th Order” by Jerry Sohl — A robot lands on Earth. Its mission is to determine if there are ample supplies and an available workforce to mass produce more of its kind, as is being done on many planets across galaxy. Given its ability to read minds at the conscious level, even those hundreds of miles away, humanity seems to pose no real threat to its plan, no matter how much they try to interfere with it. 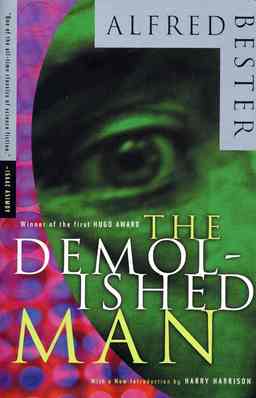 This was a good story with building tension and an interesting ending. Sohl was also a scriptwriter, lending his talents to shows like The Twilight Zone, Alfred Hitchcock Presents, and Star Trek.

“Catch That Martian” by Damon Knight — People across New York are being sent to a different dimension. They can still see everyone, and everyone can still see them, but they can’t physically interact with the regular world. Not even sound passes between the dimensions. The protagonist believes a Martian is at fault – one who can blend in perfectly to society. He begins seeing a pattern – that anyone who crosses the Martian’s path while practicing obnoxious behavior is zapped into the other dimension. With the rewards for finding the responsible party increasing, the protagonist takes the case as a second job, hoping to cash in when he finally catches that Martian.

Knight’s had better stories, so I wasn’t that impressed by this one. It’s not that it’s a bad story; it just takes time to get going. And I felt disappointed by the ending.

The Demolished Man (Part 3) by Alfred Bester — In this final part of the novel, Preston Powell, the police department’s Prefect of the Psychotic Division, continues his quest in successfully charging Ben Reich with murder. Despite the evidence, Powell needs a strong motive for the crime, and there doesn’t appear to be one. His last chance is to ask all of the espers (people with extrasensory perception) to focus their reserve powers upon him so that he can search through Reich’s deepest recesses, hoping to finally answer the question of motive and solve the case.

The novel resolved quite well. It wasn’t a twist ending, but it was an ending that I couldn’t predict. I can see why it received the first Hugo for Best Novel. If you have the chance to pick it up, I don’t think you’ll be disappointed.

And here’s a bonus about Alfred Bester — in Firefly, Bester was the name of the original mechanic of Serenity. I enjoy subtle nods like that.

Matthew Wuertz’s last retro review for us was the February 1952 issue of Galaxy Science Fiction.

As you may already know, there was also a nod to Bester in BABYLON-5 — a bad guy, a Psi Cop, played by Walter Koenig. Presumably making him a Psi-Cop was explicitly a nod to THE DEMOLISHED MAN.

Rich, I didn’t know that. I never got into BABYLON-5. Very cool.

I am also glad Mr. Gold worked so hard to make his magazine as perfect as he could. What an incredible legacy and gift to the science fiction canon.

Despite my better judgement, I enjoyed “Year of the Jackpot.” Once again Heinlein confuses and entertains me at the same time. What a ridiculous premise! Women are taking their clothes off at random! Despite the desperate outreach to lonely adolescent readers, this one unfolds nicely, even though the progression of events reaches into the absurd. Heck, it was a fun anyway, right?

“Manners of the Age” shows the human side of a society spoiled by robots. The protagonist is a brat who can’t keep a functional relationship with any of the few humans left in his vicinity. I suppose this was meant as speculative social commentary, but it comes off just a little too simple to me.

“The Seventh Order” was more interesting for me. It is always fun to try to solve a problem like a supposedly omnipotent robot. I did enjoy the solution at the end and the resultant entry back on the robot’s home planet.

Matthew, I disagree about “Catch That Martian.” Yes, Knight had better stories and this one had an overly long development, yet I still enjoyed, once again, the problem of solving an apparently unbeatable foe. The ending was not at all what I expected, but I do appreciate authors who are willing to leave us on the dark side of things once in a while. Too many happy endings make things predictable.

Yes, “The Demolished Man” is worth seeking out for those who have not read it. The idea of the motive is explored nicely in this final chapter. Also, the idea of being “demolished” is finally explained to some degree, though it had been hinted at all along. Honestly, for me this might be worth a second read. The frantic pace and Bester’s sometimes chaotic style made it hard for me to keep up at times as I read this in my evening stupor. The hook-up at the end was a bit creepy. I know Barbara is an adult, but the love affair began when she was going through the child phase of her mental reboot.

Matthew, you caught me before I was done this month, but I should be ready next time. I got a flood of new magazines all at once so my reading commitments got the best of me. All in good fun. See you next month.

Yes, I agree the Heinlein story had a questionable plot at first, but it worked overall.

My problem with “Catch That Martian” wasn’t that I needed a happy ending. I just needed a better resolution. I was left feeling like I was off in another dimension with no way to interact with the story.

That’s a good point. Even a dark ending needs to seem final, or at least thoughtful. Perhaps Mr. Knight wrote himself into a corner and took an easy way out.