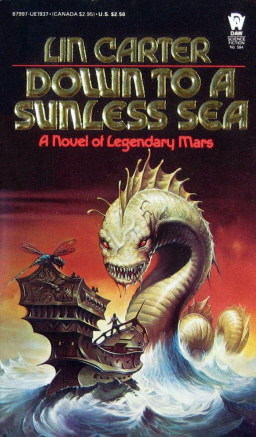 We’re big fans of Lin Carter here at Black Gate. He was one of the most influential figures in 20th Century fantasy, chiefly as the editor of the Ballantine Adult Fantasy (BAF) line of paperback reprints, the six volumes of The Year’s Best Fantasy Stories, and the groundbreaking Flashing Swords! sword & sorcery anthologies. He was also one of the hardest working professionals in the genre. Carter edited a BAF volume every single month between May 1969 and April 1974 (65 total), and in the same time period produced over a dozen novels and numerous short stories.

Although his own fiction output was prodigious, Carter is remembered today chiefly as an editor rather than a writer. In his fond review of Carter’s 1984 novel Kellory the Warlock back in March, Fletcher Vredenburgh gave us a blunt assessment of his skill as a writer:

Poor Lin Carter: perhaps the greatest champion heroic fantasy ever had, an editor with few equals, one of the most knowledgeable fan boys in the world, but a poor writer. I think he would have liked his stories and novels to be remembered more fondly than they are. I believe Kellory the Warlock proves he had the potential to have been a better writer…

Most of his fiction, rarely more than pastiches of his favorite authors (Howard, Burroughs, Lovecraft, and Dent), never garnered enough attention to be republished… Carter was no master stylist and it can get a little irritating. Most of the time, he was trying to create fun, quick reads that were recreations of his favorite writers. In a way, he was writing fan fiction; it’s just that he got his published.

Personally, I’ve always been curious about Carter’s Mars novels, since they seem to be more fondly remembered today than much of his other fiction. I’ve always assumed they were Burroughs pastiches, but the Author’s Note to the final volume, Down to a Sunless Sea, makes it clear that they were actually inspired by the Queen of sword-and-planet fiction, the great Leigh Brackett herself. 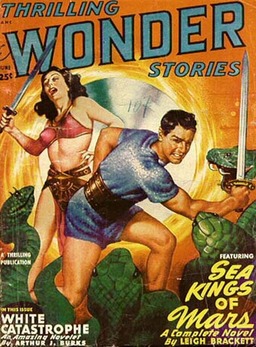 Carter’s Mars novels are also known as the The Man Who Loved Mars sequence. Here’s an excerpt from the Author’s Note at the end of the final volume:

This is the fourth, and, probably, the last novel I shall write in a loose sequence of books I think of under the heading of The Mysteries of Mars. Like the novel in your hands at the moment, all four are set on Colonial Mars about two hundred years from now.

I call these books a sequence, not a series like the five books in my Saga of the Green Star, or the six novels which comprise my Godwane Epic, or the eight which make up the adventures of Jandar of Callisto, because, while each of the other series where linked together by continuing characters and each individual novel was actually one sequence on an overplot, my Martian mysteries are different.

No characters continue from book to book, and no overplot controls them. Actually, the only link of continuity between these four books is that they are laid on the same version of Mars – which was obviously (as the knowledgeable reader, who is an author’s bliss, will easily have realized) shaped and influenced to a considerable degree by Leigh Brackett’s marvelous series of Martian adventure stories which were published in such science fiction magazines as Startling Stories and Planet in my early to middle teens.

Those yarns had wonder titles like “Shadows Over Mars” (which Don Wollheim, then at Ace Books, reprinted as The Sword of Rhinannon) and “Sea-Kings of Mars,” and so on. When I came to create my own version of Mars I was inescapably reminded of hers, and strove to write my novels in something resembling her lean, sinewy prose, which I have always admired and thought excellent.

This was a rather delightful discovery. I’m far more interested in reading an homage to Leigh Brackett than I am in (yet another) Burroughs pastiche.

Here’s the first, a Fawcett Gold Medal paperback with a colorful cover by Paul Lehr: 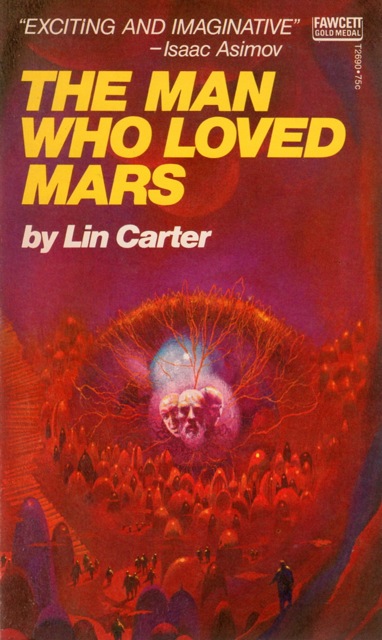 Carter’s love of swashbuckling adventure is obvious in Down to a Sunless Sea and, in terms of plot and setting at least, he mirrors Brackett passingly well. The book opens on the surface of Mars, a dying planet where the native civilization is in the late stage of a lengthy decline, and human colonists, living in a fragile truce with the humanoid natives, prospect for rare and valuable Martian artifacts.

Our protagonist, an anti-hero named Brant, joins a renegade company that quickly finds itself on the run from mysterious enemies. Cornered and desperate, Brant and his companions discover to their surprise an ancient and long-lost doorway, concealing a forgotten stairway deep underground. 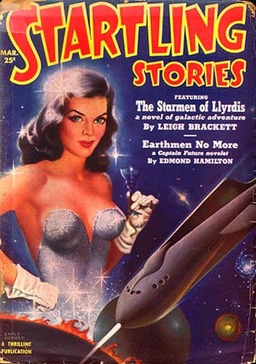 Brant’s life had been hard after the courts had sent him to the penal colony at Trivium Charontis on Mars. Since working his way to freedom, he had run guns to the High Clan princes, sold them liquor and forbidden tobacco, and peddled narcotics to the soft, timid Earthsider clerks. He had stolen, he had cheated at cards, he had killed a man more than once…

Now fleeing from justice across the ancient dust-oceans of Mars he had no way of knowing that he was running toward the most fantastic adventure any man had ever lived – toward refuge more absolute than any man had ecer dreamed of — by the banks of secret rivers, in caverns yet unmeasured by man, on the shore of a sea the sun had never seen!

One of the more reliable ways to gauge what kind of book you’re about to read (at least in the 80s, anyway) was to flip to the back and see what other titles the publisher is trying to sell you. The last page of Down to a Sunless Sea is a DAW house ad listing over a dozen additional DAW titles, under this catchy header:

Do you long for the great novels of high adventure such as Edgar Rice Burroughs and Otis Adelbert Kline used to write? You will find them again in these DAW novels, filled with wonder stories of strange worlds and perilous heroics in the grand old-fashioned way.

Listed below are titles by David J. Lake, William L. Chester, Dray Prescot (Kenneth Bulmer), Lin Carter, Charles R. Saunders, and a handful of others. Not a bad list at all, really.

Down to a Sunless Sea was published by DAW Books in June 1984. It is 176 pages, priced at $2.50. It has never been reprinted, and there is no digital edition. The gorgeous cover is by Ken Kelly.

Everyone who loves fantasy owes Lin Carter big time. Though it’s been…oh, thirty-five years since I’ve read them, I remember his Green Star series as being pretty good, more Merritt then Burroughs. Maybe I’ll dig out my old DAWs and give them a look again. In a world of 14 volume series each volume of which runs 900 pages, there’s something to be said for giving a reader 160 pages and the rest of his life to think it over!

I’ll have to hunt these down. Brackett is one of my all time favorites.

[…] wrote about the last of Carter’s Mysteries of Mars novels, Down to a Sunless Sea, just last week. In the Author’s Note for that book, Carter shared the source of his […]