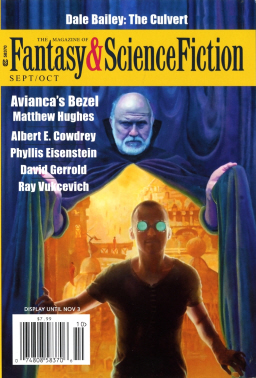 September was a good month for swords & sorcery stories. While the next issue of Heroic Fantasy Quarterly is still several months away, Fantasy & Science Fiction (presently celebrating its sixty-fifth year of publication) has a trio of tales. Swords and Sorcery Magazine, as every month for the past two and a half years, presented two new stories.

I started subscribing to F&SF earlier this year, but until now there haven’t been any S&S stories. Now in the September/October 2014 Issue, they’ve presented three. The first is a novelette by Phyllis Eisenstein. “The Caravan to Nowhere” is a tale in her long-running saga of the minstrel Alaric. It’s actually a reprint, with the story first appearing in the recent anthology Rogues, edited by Gardner Dozois and George R. R. Martin. The first story in the series, “Born to Exile,” appeared in the same magazine all the way back in 1971.

Alaric is a far-traveling minstrel with magical powers. He can shift his location from one spot to another instantaneously. In a world where such sorcery is usually feared, he is always on the move, seeking fresh opportunities and material for new songs. At the story’s start, he joins a caravan into the desert hunting not just inspiration, but also legendary hidden treasure and a lost city. While the caravan master, Piros, dismisses the tales as only drunken fancy, Alaric decides it’s still worth joining the party.

Alaric discovers that in addition to its purpose of buying salt, the caravan is journeying into the heart of the desert to acquire a supply of the Powder of Desire. It gives its users visions of great wonders, but it’s ultimately dangerous and debilitating. Piros’s dissolute son is himself addicted to the substance. When they arrive at the source of the powder, things take a dangerous turn.

I’ve never read anything by Eisenstein before, but I am looking forward to tracking down copies of the Alaric collections Born to Exile and In the Red Lord’s Reach. Her style’s clean and while this story isn’t overly exciting, I found myself caught by how she tells of the caravan’s leisurely venture over the sands.

The second story, “Avianca’s Bezel” by Matthew Hughes, is redolent of Jack Vance’s Cugel stories. As with Eisenstein, this is Hughes’s newest installment of an ongoing series, several of which have appeared previously in F&SF. In this very funny story, the thief Raffalon finds himself on the wrong side of the law in the city of Wal. Caught trying a padlock and in possession of lockpicks, he is unable to talk his way out of being arrested. In order to pay off the fine for “vagrancy and aggravated mopery,” as well as the court cost, he is sold to a wizard.

The wizard informs him that he has a special job for Raffalon to do.

“I have a task that needs undertaking,” he said. “If you succeed at it, I will have no further use for you.” He made a gesture that put Raffalon in mind of a wind-borne seed wafting away on a playful breeze.

The idiot part of Raffalon was transported by joy at the prospect of working for Vidlo. But another part of the thief was able to cut through the ecstasy to ask, “And if I don’t?”

Vidlo shrugged. “Then I’ll have to try something else.”

“I meant what happens to me if I cannot do as you require?”

“Oh,” said the hairless man, “then I suppose no one will have any further use for you. Not even you.”

As is the nature of working for a wizard, nothing is at it looks or goes as planned. Raffalon’s quest for Avianca’s magic-negating Bezel takes him back and forth across several planes of existence and into battle against monsters and a witch. The story is a little long and has one ending too many, but it is funny and cynical in all the right ways. I will be tracking down the earlier Raffalon stories.

Tom Underberg’s “Sir Pagan’s Gift” is an interesting tale of a traveler who has crossed the ocean and ended up in a small fishing village. Because he is a stranger and not a worshipper of their god, the townspeople call him Sir Pagan.

The villagers are under the thumb of the fishmongers. The fishermen signed an agreement to provide a certain number of fish to mongers, but ever since then the catch has been small and sickly. Each time they fail to meet their quota, they come further under the mongers’ control. From his position as an outsider and with insight given him using his people’s Book of Flame, Sir Pagan has leanred that all is not as it seems and the fishmongers are at the root of the bad catches.

The story’s an interesting one, but it’s written mostly in a stilted present tense, which can be distracting from what is otherwise fine characterization and world-building.

Swords and Sorcery Magazine #32 has two very good stories this month, one serious, the other funny. Unlike F&SF, which you do have to pay for, this magazine is still free.

“Witch’s Intuition” by Jamie Lackey is a well-told story of an old wizard and witch; dangerously misunderstood motives; and a very big, very evil dragon. A witch has moved into the territory of the wizard Turnsig. Determined to uncover the reason for her arrival, he transforms himself into a kitten. While undignified, he considers it his best option, as witches attract cats so he shouldn’t seem out of place. What he doesn’t expect is catnip. He finds himself at her mercy and ends up curled up in her lap and purring.

Turnsig escapes her cottage without learning why she’s moved into the neighborhood.

There’s nothing especially new about the plot of “Witch’s Intuition”, but it has several very good things to recommend it. Her characters are well-drawn and there are several touches I was really taken with. The dragon Karsis’s first weapon against his attackers isn’t violence, but insinuating words to undermine their spirit and resolve. Lackey is another writer I’ll be keeping my eyes open for in the future. 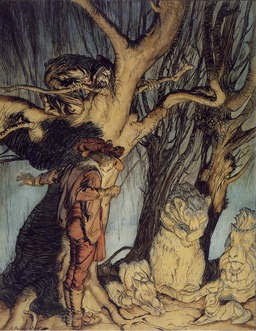 Mike Rimar’s “The Pixie Thief” is a fun and funny story about, well, a thieving pixie named Boniface Praig. He’s determined to win the love of a human barmaid and the only way he imagines that possible is by getting a wizard to make him man-sized. To do that, he plans to rob the tower of the recently deceased wizard, Carmichael the Ferret. Other skilled thieves had made the attempt, only to run afoul of wards left by the dead sorceror, but Praig is determined to figure out how to get in and out of the tower alive and with something some other wizard is willing to pay highly for.

Easily the lightest story I read for this post, this was also my favorite. I loved the pixie’s interplay with his friend, the falcon Gunther, and his enemy, the owl Loo. I could easily imagine this one illustrated by Arthur Rackham.

So there you have it. Five stories for your enjoyment, some even for free. So keep reading and supporting S&S short fiction!

[…] September, also on the pages of F&SF (Sept/Oct 2014). “Avianca’s Bezel,” which I like very much, also features Raffalon. Therein, he learns the hard way the problems attendant with working for […]

[…] by Jamie Lackey (whose previous S&SM story, “Witch’s Intuition,” I reviewed favorably last year), is a love story as experienced by a monster. Even if it isn’t S&S, […]