If you have a book you’d like me to review, please see the submission guidelines here. I’ve run short on books that I’ve received in the past year, so anything new has a good chance of being reviewed. 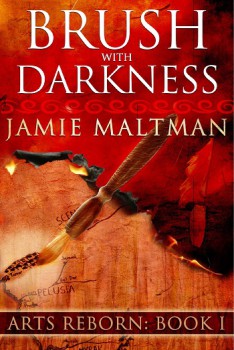 Anyone who’s been reading my reviews for the past year and a half has gotten a pretty good idea of what I like and don’t like. I prefer my fantasy to be epic rather than urban. I was tired of vampires years ago. And I like dwarves and weird westerns. You might want to add one more “like” to that list: Romans. I’ve had a soft spot for these ancient imperialists ever since I took Latin in high school. My own fiction frequently features them, and I’m likely to read any epic fantasy which includes an homage to ancient Rome. It is, in fact, what my wife and I first bonded over. All of which brings us to this month’s self-published novel,  Brush with Darkness.

In  Brush with Darkness, the part of the Romans is played by the Pazians. The Pazians control much of the known world, including the analogs for the Greeks (the Izari) and the Jews (the Benjai). And just like the historical Romans, they are frequently at war with the barbarians living beyond their borders. The story opens with the 7th Legion chasing a group of Scentari raiders, who have just destroyed a Pazian town located in territory the Scentari were driven out of a generation ago. The chase does not go as planned, as the Scentari now have access to dark magic.

Simon Baroba is a half-Benjish legionary with the 7th. He’s not much of a warrior, but he’s been recruited as an aide to Camp Perfect Garas, largely because of his skill with maps and diagrams. Simon used to be quite the artist when he was younger, but his instructors did their best to discourage him from doing anything but copy the works of the great masters. Because of this, he tried to find success elsewhere by joining the legions. Unfortunately, there’s not a lot of glory in taking part in a losing military campaign.

Due to the dark magic of the Scentari’s grand thane Shadush, the greater part of the 7th Legion is destroyed and Garas becomes the general. He sends Simon, along with Persei, a scion of the powerful Lokuta family, back to Pazh to report on the disaster and to seek help.

Along the way, they stop in the city of Attarsus, where Simon meets the beautiful sculptress Elysia. She recognizes in Simon the Talent, magic born from art, and offers to introduce him to her master, Xelos. Unfortunately, Simon cannot stay in Attarsus long enough to do so, and is shortly on his way to Pazh. There he is called to testify before the Senate about what really happened, and when his account does not line up with Persei’s, the Lokuta family attempts to kill him, so he flees back to Attarsus.

The story slows down considerably at this point, focusing on Simon’s training with Xelos and the burgeoning love affair with Elysia. It certainly felt to me like this interlude went on for too long, and it was kind of a relief when the assassins showed up, forcing Simon and Elysia to flee, returning to General Garas and the 7th Legion in time to fight Shadush’s magic with their own.

This slow down in the middle is the weakest part of the story. While I love training montages as much as the next reader, it needs to be just that, a montage–a five-minute set of inter-spliced scenes, preferably with an 80s power ballad playing in the background . . . Okay, the way it’s done in movies doesn’t directly translate to books (though it can work in comics pretty well), but I still felt that Simon’s training with Xelos should have moved more swiftly. The romance subplot with Simon and Elysia repeatedly attempting, and failing, to find some privacy away from their minders helped add a little variety, but I don’t really like romance scenes any more than I like training scenes, so you can imagine how I felt about the two of them combined.

There was also a good bit of infodumping, especially early on in the novel, when describing how the Pazian legion camp was set up, and later, when explaining how magic worked. Now, I’m not as down on exposition as some people are–really good exposition can be a thing of beauty–but it’s also hard to get right, and often it interrupts the flow of the story. I felt the magic explanation parts were better, since it could be done well in dialogue with a reader avatar in Simon, who had a better reason for asking about magic than he had for looking over the legion camp and being impressed by how well organized it was.

Despite these stumbles, a lot of things in this novel work well. In particular, the characterization was especially strong. Simon is a likable hero, and the fact that he shies away from violence makes an interesting contrast to the usual epic fantasy hero. I liked Elysia as well, and her relationship with Simon was believable (unlike many romance plots, which seem to pair the main male and female characters just because they’re the main male and female characters). She also had a bigger part to play than love interest, and was important for the finale. The villains, both the Lakutas and Shadush and his Scentari, were dangerous and threatening without being reduced to caricatures. While the pacing could have been better, the plot was well thought out, with events flowing logically from one to another, while still having a few surprises. And the writing worked well, especially the rich descriptions, both of the scenes and of the art.

Brush with Darkness is available from Amazon and Barnes & Noble. The author’s website can be found here.