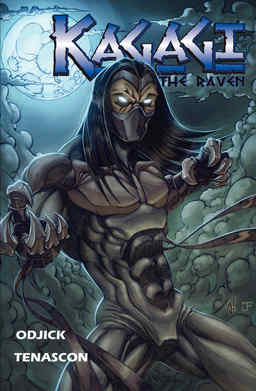 In Ottawa, I get to talk to local game designers, local writers, local comic book publishers, local artists and novel publishers. I’m not trying to be a booster of Canada’s capital or anything, but we have some wickedly cool stuff going on around town.

This weekend, at Can-Con, Ottawa’s Literary Science Fiction, Fantasy and Horror Convention, I set up an interview in front of a live audience to talk to Jay Odjick, an Algonquin graphic novelist, to talk to him about being a writer and artist and about Kagagi (pronounced with two hard Gs).

Jay is a loud, hilarious, talented, self-deprecating, straight-talking comic creator who earlier in the week had been interviewed by CBC radio and afterwards tweeted “…managed to talk for twelve minutes on the radio without swearing.”

His immediate lead story about where and when he started to be a comic creator started when he was five years old and he was part of a two-man con aiming to unmask a celebrity Spider-Man to prove that it wasn’t the real Spider-Man.

Some years ago, like many comic creators, Jay made up his own superhero. But instead of being just another caped creation added to the immense pantheon of comicdom, he created the startlingly original Kagagi, based on the legend systems of the Algonquin tribe.

Central to this is the Wendigo curse (the supervillain) that is inflicting itself upon not only humanity, but those other parts of the Algonquin legend structures.

And central as well to this is the hero legend, that Jay has turned into Kagagi, a modern 16-year-old who inherits superpowers and has to shoulder the responsibility (with some help) of protecting the world from the Wendigo figure.

Jay published an initial limited series before it caught the interest of comic publisher Arcana, who put it out as a graphic novel. Heaped with this kind of creative success, most people would have stopped, but Jay decided to get some help and found a production company to turn Kagagi into an animated series.

Yeah, well, Kagagi, the animated series, was picked up by APTN in Canada, distributed by the cable company Shaw, and its pilot is airing this Sunday and 10am, which incidentally, is right during Can-Con! 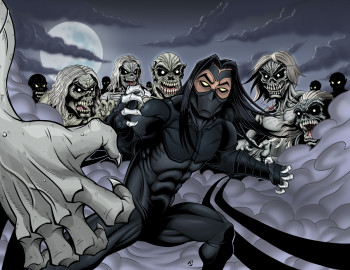 And it looks amazing. Check out the opening here. Music for the opening is “Electric Pow Wow Drum” by A Tribe Called Red.

That’s kind of stunning. A guy goes from wanting to draw to launching his own TV series in twenty-five steps. I’m stunned that this is happening in my backyard.

Jay’s creation is going to be shown across Canada, and who knows? TV attracts attention, and hopefully gets shown in other markets.

You can check out Kagagi the comic at Comixology (pick up the e-version of the graphic novel for only $3.99) and you can find out more about Jay @JayOdjick.

And, if you’re in Canada, check out @APTN at 10am on Sundays for the animated series!

Derek Kunsken is a writer of science fiction and fantasy living in Gatineau, Quebec. You can find out more about him @derekkunsken or www.derekkunsken.com.