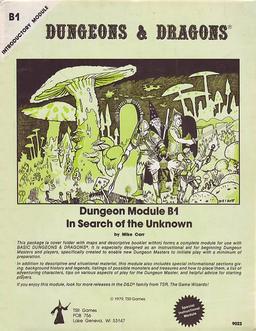 The Dungeons and Dragons roleplaying game has been a part of my life since I was a wee lad. My first DM was my father, who was patient enough to walk his eight-year-old and five-year-old sons through the a few introductory sessions. After that I was hooked, but I realized I wanted to be the one “behind the curtain,” controlling the game. And so my odyssey began.

Herein I’ll detail some of the D&D campaigns that I’ve run over the years, starting at the very beginning.

I was eight when I ran my first adventure. My players were my younger brother and a friend from school. I took them through B1: In Search of the Unknown, the module included with the basic D&D box set.

Wow, what a rush. I was hooked from the start, controlling this awesome new game that stretched our imaginations. Even though it’s been more than thirty years, I still remember the cool tricks and traps. Especially the chamber of pools, the teleportation rooms, and the young red dragon I placed in one of the dungeon storerooms just for fun.

After that, they explored B2: The Keep on the Borderlands. I believe I did a TPK (Total Party Kill) in the first session when the players allowed a chaotic cultist to accompany them into the caves. It was very sad (for them… I secretly chortled). 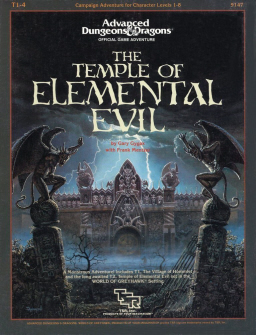 For a couple years, I read more about D&D than I actually played. I loved (and still love) poring over modules and sourcebooks. I think I’ve read the original Deities and Demigods cyclopedia at least a dozen times, and spent hours studying the full-color map of the Flanaess by Darlene from The World of Greyhawk.

Then I found a regular group at my junior high and started playing Advanced D&D with them. I recall running them through The Temple of Elemental Evil, which still remains one of my favorite super-modules. In particular, I remember that the orb of golden death was given to the lawful good cleric for safekeeping, and he slowly turned evil as the campaign went on.

TEEE was probably the first time I changed published material to reflect changes in the adventure over time. Every time the characters left the temple to recover from injuries, sell loot, or whatever, they returned to find the denizens better prepared the repel them. This made for some excellent encounters as the players brainstormed better tactics rather than just hacking-and-slashing their way through the module.

After TEEE, the group tackled Scourge of the Slave Lords series. Although I think these modules were written for competitions, I found them full of great stuff, especially the boss encounters. The final battle in the slave lords’ aerie in A3 was crazy. I played the enemy smart, but my players still achieved victory.

By this time, the characters were filthy rich, so they constructed a stronghold on the Wild Coast. For a while they enjoyed raising armies, attracting tenants, and battling their neighbors.

That’s when the campaign faded. We ran some adventures now and then, but nothing consistent. 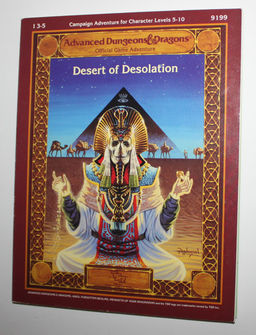 When I went away to college, I thought my D&D days were behind me. So I was surprised to find many new friends who enjoyed pen & paper gaming, and I soon had a regular group (which included my future wife) playing in the dormitory common room.

College is where I really blossomed as a DM. We were playing second edition and loving it. At one point, I had eight players, which got a little unwieldy at times. But usually we ran with five or six.

I started them off at first level with a homemade adventure where they were hired to clear a system of mines and natural caverns (an homage to the mines of Moria) to create a trade route between two kingdoms separated by high mountains.

After defeating the ogre “king under the mountain” and emerging as heroes, the group next tackled The Temple of Elemental Evil because I couldn’t resist the chance to run it again with new characters. They blasted through it, eventually defeating the demon queen Zuggtmoy and foiling Iuz’s plans. This time around, I toned down the treasure handed out, so the characters were only “slightly wealthy” by the end.

It was about this time that I transported the campaign from the World of Greyhawk to the Forgotten Realms. I don’t remember exactly why, except that FR was becoming popular and several of my players wanted to experience it, but they didn’t want to re-roll new characters. So we just went with it. Poof. World-hopped.

I started them on The Desert of Desolation super-module. I have so many good memories of this series. The desert terrain. The buried tombs. The inclusion of Egyptian mythology. The only thing it was missing, imo, was a satisfactory conclusion.

After that, I ran the D-series (Drow) modules. These were interesting because I’d never run a campaign in the Underdark before. I loved the atmosphere and the journey of these modules. But, again, the final conclusion didn’t quite “wow” me. After the excellent build-up, I expected a better finale.

My group, still intact for going-on four years at this point, was enjoying themselves. They battled higher-difficulty foes such as demons and dragons in various homemade adventures that I wrote, incorporating famous locations in the Realms, such as Myth Drannor and Hellgate Keep. A couple characters got married, the rogue took over the local thieves’ guild, the cleric founded a new temple in Waterdeep, and so on.

By the time the campaign ended, the characters had progressed from first level all the way to the upper teens. Honestly, I didn’t want it to end, but my parents insisted that I graduate. *grumble*

Here ends the first part of my tale. Please join me week month for the second half. And tell us all about your favorite D&D moments in the comments.

Jon Sprunk is the author of the fantasy epic Blood and Iron as well as the Shadow Saga trilogy (Shadow’s Son, Shadow’s Lure, and Shadow’s Master). For more on his life and writing, check out www.jonsprunk.com and his Facebook page: www.facebook.com/JonSprunkAuthor.

Easy. Our characters were somewhere in a version of B2–in the Caves of Chaos. Our low level characters are exploring this temple room when a wraith comes in.

My character leaps up on the dais, and manages to pin the wraith to the ground with a (unlikely throw) of a large chair.

We then got out of dodge (we had no other weapons to affect it!)

A couple characters got married, the rogue took over the local thieves’ guild, the cleric founded a new temple in Waterdeep, and so on.

IMO, this is that stage at which our long-term campaign got really good. We were no longer a group of adventurers. We were individuals with lives just trying to take care of business. Many of our gaming sessions were solo, but if you needed help, you could always call on one or two or three of your old companions. The campaign had a wonderful organic feel to it.

One of many memorable examples: At this point the Horned Society had been pretty much reduced to one stronghold–a very, very large stronghold, heavily populated by devils. I was one of the most skilled spies in the world of Greyhawk, but after two attempts to penetrate this place, I hadn’t gotten more than a 100 yards in before having to bail. When you’re alone in a place like that, any screw-up is death. I needed help.

I brought in three of The Boys, all much more powerful than I. We shrunk them down and hid them on my person. No more need to be conservative. I dove deep into the place and gathered a lot of info. If I got into a little trouble, out would come one of the boys to resolve the situation. Eventually, deep in the stronghold, things got ugly. Out came all three of my companions, and we fought our way out of the dungeon. We all loved the reversal.

My favorite moment is a simple one. I was running a forgotten realms game a few years ago.

The player’s were going to be headed into a heavily forested area. I made a potion vendor offer a liquid that will kill plant life rapidly. The potions were completly fake and the bottled just contained colored water that had a strong smell.

I had the guy act suspiciously to try and get the players to ask for a sense motive check.

None of them suspected anything except the one player who never really paid attention and never had any good ideas. he said “i bet you he’s lying.” everyone ignored him and bought them anyway.

Three game sessions later i had these vine monsters attack the PCs and one of the tried to use the potion and threw it and watched it do nothing.

we all laughed hard after that

I still recall the days of playing your game in college fondly, and if I’d not had the same bug as you to be “behind the curtain”, I’d have played all the way through. Niturn remains one of my favorite characters, and the source of many good memories.

There are far too many to name a fave, but here’s one memorable one, though a bit X-rated. (Context: remember that these are all 13-14 years olds playing):

One party member (male) was going at it, missionary style, with an NPC (female) who happened to be a theif-wizard on the loose and trying to hide out from the authorities.

Second player character’s response on seeing this scene: “That’s an amazing ability you have to balance yourself sir!”

So many wonderful moments that choosing one is a challenge, but for me, as DM, one simple moment stands out as all but perfect.

My players uncovered a Lawful Evil conspiracy to summon an ultra-powerful entity from another dimension to bring about a new age of Lawful Evil that would transform the world.
They’d battled their way across an uncharted sea, discovered a lost continent, crossed a vast desert, and penetrated a subterranean city built by an alien race before humanity fell from the trees.
This is the place a mighty confederacy of LE villains are coming together to pool their power and summon the Dark Angel of Law.

The city beneath the earth is walled in half, with the second half having been sealed in total darkness for millennia.
My players make their way into the sealed city the only way possible, passing through a huge chamber designed for mass sacrifice (“Jesus, we’re in a giant Cuisinart!” said the cleric). They got out by climbing up through an altar, and emerged into a city transformed by eons of night, with an eldritch eco-system all its own.

As they approached a fungus-grown fountain, I described a mass of luminous moths lifting from the fountain’s wide bowl and flying away.
I looked over the DM screen and all of my players were staring, wide-eyed, at the kitchen’s ceiling. Watching the moths.
I knew I had them then.

Black Gate » Blog Archive » The Dungeons (and Dragons) of My Life, Part Two

[…] folks. Last month I posted the first part of this blog about the Dungeons & Dragons campaigns I’ve run. Now I’m back with the second […]

[…] The Artistic Mystery of The Temple of Elemental Evil and the Turmoil of 1985 TSR by Scott Taylor The Dungeons (and Dragons) of My Life, Part One by Jon Sprunk Four Modules by James Maliszewski io9 Looks at the Megadungeon Get The Temple of […]