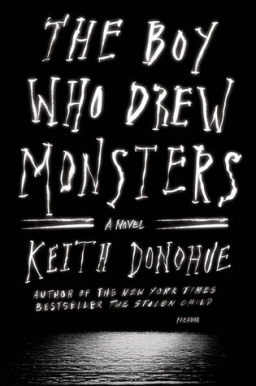 What seems like a million years ago, while digging through stacks of used books at my local library sale, I discovered a tattered copy of Zenna Henderson’s collection of creepy tales, The Anything Box (1977). Within those pages, I found what is today one of my top 10 favorite short stories of all time, “Hush.”

It is the classic literary scare relying on the terror of lurking things that cannot be seen, rather than the in-your-face-violence of things that can. “Hush” tells the story of an ill little boy whose fevered brain gives life to the horrors in his imagination, which in turn, stalk his unwitting babysitter… naturally.

Eerie little kids with large, soulful eyes staring at you from someplace they shouldn’t be – frankly there is almost nothing more frightening, if you ask me.

Flash forward to October, 2014 and a new offering from the New York Times bestselling author of The Stolen Child, Keith Donohue — where once again we have a creepy little kid trapped in his own world, and whose solitary imagination blurs the lines between fantasy and reality.

Ever since he nearly drowned in the ocean three years earlier, ten-year-old Jack Peter (“Kip”) Keenan has been deathly afraid to venture outdoors. When Kip takes up drawing, his parents, Holly and Tim, hope this new creative outlet will help Jip to combat his introversion, agoraphobia and occasionally violent tendencies.

Inside his home in a small coastal town in Maine, Kip spends his time drawing monsters. When those drawings take on a life of their own, no one is safe from the terror they inspire.

Holly begins to hear strange sounds in the night coming from the ocean, and she seeks answers from the local Catholic priest and his Japanese housekeeper, who fill her head with stories of shipwrecks and ghosts. His father, Tim, wanders the beach, frantically searching for a strange apparition running wild in the dunes. And the boy’s only friend, Nick, becomes helplessly entangled in the eerie power of the drawings. While those around Jack Peter are haunted by what they think they see, only he knows the truth behind the frightful occurrences as the outside world encroaches upon them all.

An isolated beach house, a beast-like man in the road, the bone of a human arm in the sand, visions of evil babies ‘scuttling like silverfish across a page’ and a creepy little kid come together in a perfect-for-Halloween mixture.

The Boy Who Drew Monsters promises to be a mesmerizing tale of psychological terror and imagination run wild: an appropriate read for a dark and stormy fall night.

The Boy Who Drew Monsters is available in print and e-book on October 7th.