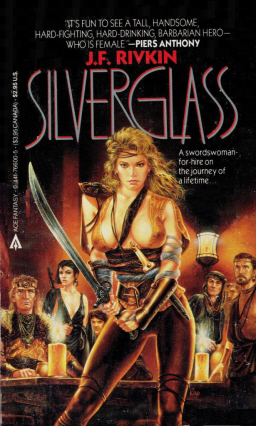 There’s no shortage of fantasy fiction with strong women heroines these days — in fact, if you’re standing in front of the urban fantasy section of your local bookstore, I wouldn’t be surprised if you assume that that’s all there is.

I do hear the occasional observation that this is entirely a modern development however, and obviously that’s not true. Yeah, adventure fantasy was largely dominated by male writers in the 20th Century (and male editors, and male art directors, but that’s a different topic.) But it wasn’t just trailblazers like C.L. Moore, Anne McCaffrey, and Joanna Russ creating popular female heroes. Even in midlist fantasy, there were popular sword-wielding women characters, many of whom are forgotten today.

Are they worth remembering? That’s a different question.

I’ve always wanted to find out. Recently I’ve been curious about the Silverglass books by J.F. Rivkin, four novels published between 1986 and 1991: Silverglass, Web of Wind, Witch of Rhostshyl, and Mistress of Ambiguities. The first one crossed my desk again last night, part of a small paperback collection I recently acquired, and I dipped into it long enough to be intrigued.

Probably the reason I’ve remembered these books so long is the colorful wraparound covers by Royo. For Silverglass, he surrounded our heroine with an interesting cast of characters in what looks like an underground tavern — a setting that immediately spoke to me of adventure in 1986. The main selling point is summarized in the Piers Anthony blurb at the top:

Here’s the book blurb, and high-res scans of the front and back covers.

The life of a sword-for-hire was often uncertain, but brazen and beautiful Corson brenn Torisk would have no other.

When Corson’s services as a guard were engaged by the Lady Nyctasia, it seemed that fortune was finally smiling upon her. The Lady had a ready wit, an open purse and a reputation for sorcery which she assured Corson was quite undeserved.

While Corson had little liking for magic and still less for magicians, it seemed too good an opportunity to refuse. But when her employer’s enemies proved to be as numerous as her coins, Corson decided that any aid was welcome — even the Lady’s sorcery.

And here’s a bigger version of the front and back covers (click for high-res versions.)

Who is J.F. Rivkin? That’s something of a mystery. He (or she) vanished in the mid-90s.

Silverglass was published in 1986 by Ace Books. It is 186 pages, originally priced at $3.50. It is currently out of print, and there is no digital edition.

Wow. I missed these completely. Looks like a trip to the used bookstore is in order.

I have this series, but have only read the first two thus far. Both light and enjoyable, the first one more so in my opinion. I don’t recall where, exactly, but I remember reading that the author, Rivkin, was actually a collaboration of two authors (but could never find out who they were). In any case, I do think there’s more to recommend them than just the fantastically dated, glam-rock covers.

Yes, I think David Coverdale was going to the same hairstylist back in the day.

I do remember this one and I always wanted to read it. But I was moving away from fantasy at this point and reading more horror.

I might have to see if any of my local Half Price Books has it.

More seriously, I think I remember knowing about this series back in the day, but having it somehow confused with Lynn Abbey’s Rifkind.

> I have this series, but have only read the first two thus far. Both light and enjoyable, the first one more so in my opinion.

Thanks for the review! Glad to hear they’re worthwhile.

> I don’t recall where, exactly, but I remember reading that the author, Rivkin, was actually a collaboration of two authors (but could
> never find out who they were). In any case, I do think there’s more to recommend them than just the fantastically dated, glam-rock covers.

Near as I can figure out, J.F. Rivkin was a single person, but also wrote in collaboration with fantasy author Jeri Freedman under the name Ellen Foxxe. But there isn’t a lot of info available on way or another.