At the start of World War One, the armies of Europe were still thinking in the terms of the nineteenth century. Many soldiers sported colorful uniforms more suitable for the age of black powder, radio operators broadcast in the clear not thinking anyone would be listening, generals still advocated cavalry and bayonet charges and sneered at newfangled inventions such as the airplane, and forts were considered the best way to defend a country.

Belgium was officially a neutral country. Still, it feared invasion from its more powerful neighbors. It built a string of forts at Liège and Namur to protect against attack from the Germans and French respectively. When the Germans attacked Belgium in their daring sweep to take Paris, they brought heavy siege artillery in order to deal with these forts.

The forts at Liège were the first to fall. The Germans at first tried a direct assault that was repulsed. They then settled down to bombardment and the forts surrendered on August 16. Then the Germans descended on Namur, an industrial town at the confluence of the Sambre and Meuse rivers that guarded the way to France.

At first glance, the ring of defenses around Namur looks fearsome. Completed in 1892, they comprised nine different forts, each built on a triangular design to reduce their vulnerability to artillery. They bristled with artillery, with many of the guns mounted on steel turrets. There was a garrison of 37,000 troops of the Belgian Fourth Division to defend them.

The forts suffered from a few key design flaws. Most of the construction was done with concrete, a new material at the time. The concrete wasn’t reinforced with rebars and was only poured during daylight hours, meaning that the previous day’s pour would partially harden before the next day’s pour was laid on top. This led to seams forming between the pours.

The German Second and Third armies arrived on August 20, 1914. They numbered some 107,000 men and were well-equipped with heavy artillery. They set up a ferocious bombardment. Most effective were the 42cm Big Bertha howitzers, which blasted great holes into the concrete. Turrets were dismounted, and in one case a large explosion inside a fort popped a turret right off its mounting.

The bombardment revealed another design flaw. The barracks and other facilities for the men were located in the counterscarp, which was vulnerable to bombardment. The men had to flee into the fort proper, where they were crowded inside and the air circulation system was soon fouled by fumes from the exploding shells. 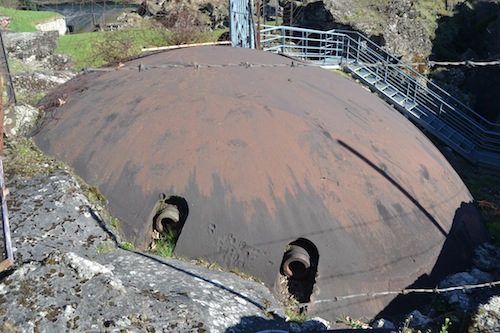 The forts surrendered on August 25 and the Belgian army retreated. They left behind some 15,000 comrades, who were killed, wounded, or taken prisoner. The Germans had only suffered some 900 casualties.

The forts at Liège and Namur were not complete failures. While they proved vulnerable to modern artillery, the few days required to take them wreaked havoc on the German timetable to get to Paris. By the time they approached the French capital, the French army was prepared and were receiving support from the British, who had come into the war to uphold a treaty they had to protect Belgium. Many German commanders believe they lost the war in the first two months, and the forts of Belgium played a large part in that defeat.

Like the Citadel of Dinant, another outdated fortress that quickly fell to the Germans that I wrote about in an earlier post, Namur is open to the public and provides a fascinating insight into the tumultuous year 1914.

Sean McLachlan is a freelance travel and history writer. He is the author of the historical fantasy novel A Fine Likeness, set in Civil War Missouri, and several other titles. His most recent novel, Trench Raiders, is set on the Western Front. His historical fantasy novella The Quintessence of Absence, was published by Black Gate. Find out more about him on his blog and Amazon author’s page.

All photos copyright Sean McLachlan unless otherwise noted. This trip was supported by Visit Belgium. All opinions are my own.