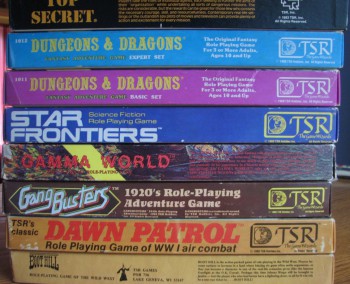 There’s a famous epigram mistakenly attributed to a number of different people – as famous epigrams so often are – that states that “the golden age of science fiction is twelve.” Some quick research into the matter reveals that its actual author was Peter Graham, an editor of fanzines in the late 1950s and early ’60s. My research also revealed that the original quote stated the golden age of science to be thirteen.

I turned thirteen in the Fall of 1982, three years after I first discovered Dungeons & Dragons. By that time, I was hopelessly in the thrall not just of D&D, but of a wide variety of roleplaying games. RPGs played a very important role in my young life, complementing many of my earlier interests and hobbies (like mythology, science fiction, and fantasy) and fostering many news ones (such as history, foreign languages, and philosophy). It is no exaggeration to say that I’d be a completely different man today if it weren’t for these games.

Consequently, I tend to look back on that time as a golden age, a time when the hobby of roleplaying was just right for a kid like me. I was reminded of this recently when I returned to visit my mother at my childhood home. Though I haven’t lived in that house on a permanent basis since I first went away to college in 1987, it still holds a great many things belonging to me that I simply hadn’t had the time to take with me as I traveled up and down the East Coast of North America. This year, I vowed that, during my visit, I’d do a proper inventory of what I’d left behind so that I could get rid of the stuff I didn’t want and once again take possession of at least some of the rest.

What I found was a time capsule of the inner life of my thirteen year-old self.

As you can see from the photograph to the right, I was an unabashed TSR fanboy. I’m pretty sure I purchased and played every roleplaying game the Lake Geneva, Wisconsin company produced up to that time. The second RPG I owned was Gamma World, about my love for which I have spoken previously. Though I never played it as often as D&D – or even Traveller or Call of Cthulhu – I played it enough that I became firmly committed to acquiring whatever TSR had on offer, which, at the time, was quite a lot!

What impressed me then, as it impresses me now, more than three decades later, is the diversity of topics and genres covered by TSR. For example, four of the games in my photo take place in “the real world,” or at least something only slightly adjacent to it. As a teenager, I was never particularly interested in gangster movies or the Prohibition era in the United States, but I nevertheless dutifully bought Gangbusters – and, through it, became interested in those things. Similar stories can be told about the influence Dawn Patrol, Boot Hill, and Top Secret had on me. In each case, the game was a vehicle for introducing me to and broadening my interest in history and literature that I otherwise might not have considered. My encounters with them changed me forever and the only reason I ever picked them up was because they were “from the producers of the Dungeons & Dragons game.”

I remember reading an article in the Baltimore Sun during the faddish days of RPGs in the early ’80s, which interviewed a fellow who worked at a local game store. The reporter asked him to explain not just the appeal of roleplaying games, but also their “value.” The fellow, as I recall, talked at some length about all the usual stuff – creativity, imagination, etc. – but he added that RPGs also sparked new and lasting interests in their players in all sorts of fields, from history to foreign languages to mathematics and more. He was absolutely right in my own experience and I doubt I’m alone in that regard.

There’s a reason I view that time as such a magical one for me and for the hobby of roleplaying. I consider myself very lucky to have been around to experience it.

Your blogs about role-playing are almost always mirror images of my own. For example, I turned 13 in the fall of 1982 and I also bought anything that TSR made at the time (the picture up at the left could’ve come out of my home as well).

In addition, I concur that RPGs really got me into a range of subjects and literature. And I too would most likely not be the person I am today apart from those early TSR games.

I wonder if RPGs or video games nowadays have the same sort of affect upon 12-13 year olds?

I look at that picture and oh, how I covet.

I recall reading that quote, or an extremely close variation, within the last year in a book written or edited by David G. Hartwell. Checking Amazon, I find a book titled “Age of Wonders.” Whether or not he said it first, the sentiment is, for many of us, lovingly accurate.

I never gathered everything that was from TSR, though I had quite a lot. I also had a handful of Avalon Hill’s RPG and RPG-centric games, Gunslinger and Lords of Creation coming to mind. Then there was early Car Wars, and later the D&D related materials, like Role Aids and the like.

Kind of makes me sad those days are gone.

I never had most of those TSR games — just Gamma World and Star Frontiers and the original basic D&D set. I do like the fact that they did Prohibition and espionage and Westerns; I always loved that section in the 1e DMG about genre-mashing.

(And it wasn’t TSR, but seeing the picture makes me really, really miss my well-nigh-complete 1st ed. GDW Traveller collection — all of the little black books.)

This could have just as easily been written about me. Even down to all the dates.

Are you backing the Designers and Dragons kickstarter? All four eras (70’s, 80’s, 90’s and 00’s) are already available for pdf backers and the KS hasn’t even closed yet.

It’s like reading about your RPG childhood into young adulthood.

Which is pretty fun.

@James McG
> I wonder if RPGs or video games nowadays have the same sort of affect upon 12-13 year olds?

They do in my neck of the woods. My son’s mate – 10 – bought Maelstrom Doomesday and I found myself trying to explain the 11th century English system of local government. Meanwhile history books are starting to appear.

Great article. My interest in spies, cowboys and gangsters was definitely increased by reading and playing these games.

I played a lot of Gamma World, Boot Hill and Top Secret in my early days of gaming. I didn’t have the skill/background material to make Gangbusters fun enough to maintain people’s interest in it. Gamma World, though, was the only one to keep getting played up until the end of my gaming days outlasting all other TSR games by over a decade.