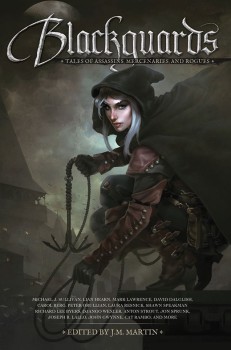 I’m pleased today to feature a guest post from writer Laura Resnick, all about an upcoming anthology, one that’s already received a lot of funding from Kickstarter. Take it away, Laura:

Back before I ever started writing or had any intention of becoming a writer, I read an interview with an author who, when asked if her dark, challenging characters were also the sort of people she was drawn to in her real life, said of course not — who could actually live with someone like that? She said she preferred stable, even-tempered, good-natured people in her real life (as I do, too). But fiction is about conflict; it’s about things breaking down, imploding, exploding, escalating, and reaching a crisis point — not about things humming along smoothly and contentedly (which tends to be what most of us want from real life most of the time).

Similarly, there is a longtime and widespread fascination in fiction with living outside the rules of society. Many people fantasize at various points about the satisfaction, excitement, or pleasure of simply doing whatever they want — stealing a boat, robbing a bank, killing their boss, seducing total strangers, breaking into the Vatican, etc. But few people are so committed to those fantasies that they want to risk losing their homes, their livelihoods, their families, their future, and their freedom in order to fulfill them. There’s also the problem of conscience; most of us would feel cripplingly terrible about murdering someone or taking possessions we have no right to take.

For all of these reasons, fiction provides something we’re attracted to, yet, for the most part, don’t really want in our own lives: fascinating troublemakers, darkly exciting characters who live outside the rules, rogues and blackguards who create and escalate interesting conflict, dashing characters who ensure that having a stable home life is virtually impossible.

These are daring, compelling, memorable characters; challenges; and adventures which are innately exciting and fun to explore and experience; but we usually prefer to experience them without the exhausting and unattractive consequences of actually getting involved in grand larceny, hijacking, and murder.

When it comes to writing such characters as heroes or protagonists, we also tend to be interested in their humanity, the ways in which they are like us, and the aspects of their personal or professional problems which are similar to our own. Does the most feared assassin in the realm nurse heartache over a lost love? Does a pirate king have a teenage child he can’t control? Does a notorious thief have an ailing parent or a paralyzing fear of spiders? Does the legendary highway robber have bandits to feed and food bills he can’t pay? Do these blackguards and rogues have logistical problems, family disputes, private sorrows,  or professional competition that worries them?

My short story, “Friendship,” for the Blackguards anthology,  is set in the world of my Silerian trilogy and takes place a few years before the first book. In this story, a powerful water wizard and one of his loyal assassins face a growing threat from an aggressive competitor, in a world where losing means death (not bankruptcy or downsizing), while also dealing with the logistical challenges of operating under an occupying foreign empire that has outlawed them.

Although the waterlord and the assassin aren’t people I’d want in my personal life (or, indeed, anywhere within a 500 mile radius of me), they’re nonetheless characters whose challenges and humanity intersect enough with our own that I hope you’ll find them compelling company in the realm of fiction.

Check out the Blackguards: Tales of Assassins, Mercenaries, and Rogues anthology on Kickstarter! It includes stories by fantasy greats Mark Lawrence, Carol Berg, Michael J. Sullivan, Anton Strout, James Enge, and many more. Read excerpts, watch the book trailer, and find out what great rewards are in store for backers of this epic anthology! The Kickstarter ends on September 24th.

I’ve been trying to limit my spending, but after seeing James Enge on the list of contributing authors I might have to get the ebook version

I pledged this one the first day. I’m looking forward to it.

Glenn: Yay! Good to hear. Some lingering impulse toward honesty, though, compels me to confess that the story I sold to Blackguards was not a Morlock story, despite what some of the things on the website say. It’s actually a mythological fantasy with Odysseus as the hero (or villain, depending on how you look at it).

[…] of thieves, rogues and assassins, when Laura Resnick wrote a guest post for us last year, “Living Outside Society’s Rules,” talking about her short story “Friendship,” set in the world of her Silerian trilogy […]