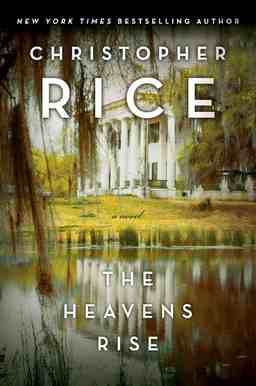 In May, the 2013 Bram Stoker award-winners were announced, creating a nice summer reading list for us genre enthusiasts. The Bram Stoker Awards were instituted in 1987 by the Horror Writers Association and cover eleven literary categories, recognizing “superior achievement” in dark fantasy and horror writing.

Though he didn’t ultimately win the category “Superior Achievement in a Novel” in which he was a finalist, Christopher Rice’s work The Heavens Rise piqued my interest. I’ve been keeping an eye on Rice since his first novel A Density of Souls appeared back in 2000. He has since published three other New York Times bestselling thrillers, and if his name rings a bell, it’s because he is the son of legendary vampire chronicler Anne Rice.

Honestly, until this year I hadn’t actually read any of Rice’s works end-to-end. I tried because I wanted to like him, probably due to spending so many hours with his mom’s books. But like many new, young authors finding their story-telling voices (Rice first published at 22 years of age), he often went over the top with his characters and plot lines.

He hadn’t yet learned to trust his readers, and allow their imaginations to immerse them in the story and fill in the tiny details. Instead, I found Rice’s self-indulgence, generalizations, and in-your-face descriptions made me feel like I was riding along on a story he was telling himself, rather than pulling me into a tale he was telling me.

The Heavens Rise marks a different direction for Rice. It’s his first foray into supernatural suspense. Perhaps because it is difficult to over-describe something you’ve never witnessed, his writing style has shown a marked evolution, helped along no doubt by interaction with his audience via his blog and weekly radio show. The upshot is that his style has become more confident and more interactive, which means it was time for me to tuck in and read one of his tales cover to cover.

It’s been a decade since the Delongpre family vanished near Bayou Rabineaux, and still no one can explain the events of that dark and sweltering night. No one except Niquette Delongpre, the survivor who ran away from the mangled stretch of guardrail on Highway 22 where the impossible occurred… and kept on running. Who left behind her best friends, Ben and Anthem, to save them from her newfound capacity for destruction… and who alone knows the source of her very bizarre — and very deadly — abilities: an isolated strip of swampland called Elysium.

An accomplished surgeon, Niquette’s father dreamed of transforming the dense acreage surrounded by murky waters into a palatial compound befitting the name his beloved wife gave to it, Elysium: “the final resting place for the heroic and virtuous.” Then, ten years ago, construction workers dug into a long-hidden well, one that snaked down into the deep, black waters of the Louisiana swamp and stirred something that had been there for centuries—a microscopic parasite that perverts the mind and corrupts the body.

These two paragraphs come straight from his publisher, and interestingly appear give away a significant plot element (I won’t say which). Though this makes me wonder if I failed to grasp the primary “ah hah” moment of The Heavens Rise, the summary offers a perfect segue to what I did and didn’t like about the novel.

Rice had me completely in the first half. He conjured the weird, just-beyond-your-line-of-sight creepy feeling that is so quintessentially New Orleans. It was impossible to definitively determine who was “good” and who was “bad” among the majority of the characters, leaving the possibility that almost anyone was capable of doing something icky.

He left things to my imagination, left me scrambling to figure out what was lurking out in the dark. And up to then, at least, Rice had me captivated.

What happened next wasn’t exactly tragic. Meaning I still recommend you read The Heavens Rise, because I’m sure you, like me and the Horror Writers Association, will see the elements of a masterful storyteller starting to emerge.

But it was rather anti-climactic.

Rice’s story, like the two paragraphs from his publisher, appeared to not know which of the many richly described story elements he wanted to focus on. So he threw in the lot: mystery, supernatural beings, science gone wrong, and monsters, with a significant amount of teenage self-discovery and angst mixed in for good measure. I wondered if Rice himself knew how he wanted to conclude his tale… and, being unable to decide, he just bailed out.

What started as a thrilling, rollercoaster ride ended at the bumper cars. It was still fun and worth the wait in line, but it could have been so much more.

The Heavens Rise was published in October, 2013 and is available in both print and ebook formats.

Have you read any of Christopher Rice’s work? Let us know what you thought. Post a comment or drop a line to sue@blackgate.com