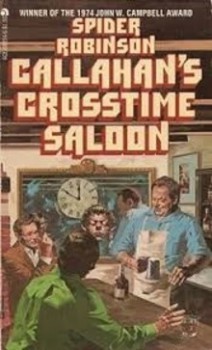 Callahan’s is a place where the day after Monday is Punday, Wednesday is Tall Tales Night, there’s a Fireside Fillmore night, and a Riddles Night. And in the grand tradition of the bar story, we get told these tall tales, we’re given the lyrics of the songs, and we can even participate in the guessing of the riddles.

But unlike the traditional bar story, these are just window-dressing, Robinson’s homage to the conventions. The real stories are what happens around, during and after all this traditional bar story action. And these are anything but traditional – they are, after all, science fiction stories, and the characters who come into Callahan’s for help are time-travelers, aliens, humans suffering from strange mutations . . . and a talking dog.

Though the prefaces, intros, and afterwords establish the pretense that Callahan’s actually exists, it’s clearly in either an alternate universe or an alternate timeline. The second story in CCS, for example, “The Time Traveler,” was written, or at least appeared, in 1973 or ’74. Not too long after that, in “The Law of Conservation of Pain,” a time traveler appears from the year 1995, using the first time machine. 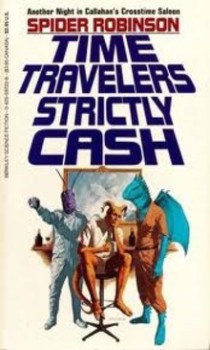 Reading the stories some decades later, we know that in our timeline, at least, no such machine was invented Sure, we could argue that the first time machines were invented in 1995 and that the public simply doesn’t know about it. But the other “futuristic” devices in the story are entertainment-oriented, and you can be sure those would be on the market – if we lived in the same universe as Callahan’s Bar.

Robinson very quickly – and very wisely – stopped putting in date markers and after a while the stories attain the timeless quality that is one of the characteristics of the true bar story.

The Callahan’s stories are such old friends that it’s hard for me to pick out favorites, but there are a few that stand out for me because of some particular touch or flourish. I’m a big fan of puns, so even a story that I might otherwise find wanting may have some really terrific pun, like the one about the organic statue, or the one about the ICBM. Then there are stories like “A Voice is Heard in Ramah,” which is the first time a woman comes into the bar, or “Pyotr’s Story,” which contains Robinson’s tribute to the Princess Bride with the appearance of the character Domingo Montoya – not the greatest sword maker in the world, but the greatest guitar maker.

And what about women? For pretty obvious reasons (ladies didn’t go to bars), the traditional bar story is exclusively male. I’m sorry to say that even with the presence of Rachel, and Josie Bauer, the Callahan’s stories as collected in the three anthologies remain pretty much male-centric. Until the appearance of Mary Callahan, Mike’s daughter, most of the female characters are there to be women, if you see what I mean. 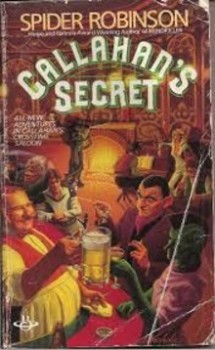 It’s subtle, but the evolution of the stories’ attitude toward women is shown most clearly through a minor character, Slippery Joe Maser. Slippery Joe has two wives. As he’s described initially, it’s implied that this multi-matrimonial state isn’t a good thing. In fact, it’s the reason Slippery Joe started coming ’round to Callahan’s in the first place. By the time of “Callahan’s Secret,” however, two wives are no longer seen in the negative, and Slippery Joe’s marriage is obviously a happy and functioning triad.

Technically speaking, there are no more Callahan’s Bar stories, though the characters do appear elsewhere, in the novels Callahan’s Legacy, Callahan’s Key, and The Callahan Touch. I enjoyed these books a great deal, though most of the time I prefer the novels that are set in Lady Sally’s Place, Callahan’s Lady and Lady Slings the Booze. The bar story is a short story and while it’s always nice to meet the characters again, changing the form changes the content.

Violette Malan is the author of the Dhulyn and Parno series of sword and sorcery adventures, and the Mirror Lands series of primary world fantasies. As VM Escalada, she writes the soon-to-be released Halls of Law series. Visit her website www.violettemalan.com.