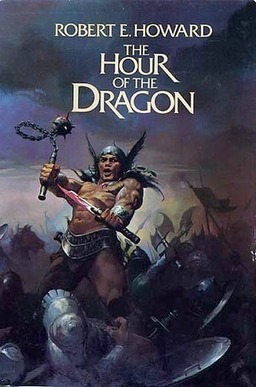 Fantasy and sci-fi literature are festooned with great heroes that inspire (and sometimes intimidate) us. Today I’d like to share some of my personal favorites with you.

I started reading the Conan books when I was in elementary school, and the subject matter felt so adult. I read the series several more times as I grew up and I find that I still love the principle character. Conan is often uncouth and, well, barbaric. But he’s a noble beast. In a world that has grown increasingly complex and ambiguous, getting inside the head of a character for whom all of life’s choices are balanced on the edge of a broadsword (or between the sheets) can be cathartic. On top of that, Conan is a paragon of freedom. The world is his oyster, the way we often wish it was for us.

At turns both wry and insightful, Croaker is the perfect narrator for a story of fantasy warfare and dark sorcery. While he plays a central role as both a physician and a soldier, he is also able to get out of the story’s way when necessary, while still remaining poignant. Through his eyes we glimpse a world torn by strife, rivalries, and the domination of the weak, and yet Croaker never gives up all hope. He’s a friend, a brother, a comrade, and a hopeless romantic.

These books have a host of great characters, but my favorite hero of the bunch has to be Sturm. Honorable to a fault, he lives — and eventually dies — for his code. But Sturm never loses his humanity. He remains our good and stalwart friend through the dark times, and someone we miss dearly.

Arya Stark of A Song of Fire and Ice by George R.R. Martin

For all the lords and ladies, knights and kings, in this series, the character that resonated the most with me for her sheer bravery and gumption was little Arya Stark. While she might seem bratty and presumptuous, Ayra is a character who believes that everyone should be able to choose what they want in life. While that makes her unpopular in a world where freedom of choice is scarce, it won my heart. And even when the odds stacked against her are monumental, she never gives up.

Elric of Melnibone by Michael Moorcock

The last emperor of a dying empire, Elric is an albino and physically frail, but when he is partnered with his demon-possessed sword, Stormbringer, he becomes unstoppable. Elric does quite a few things that are not heroic in a traditional sense, but his quest for purpose and meaning in a chaotic world, to me, is the heart of heroic fantasy.

Augmented by military cybernetics, including retractable claws and spooky mirrored eyes, this “street samurai” is a lethal blend of mercenary ruthlessness and hard-bitten femininity. She might not be the kind of woman you’d bring home to mother, but things are never dull when Molly’s around.

Looking back over these choices, a couple things are apparent to me. I love heroes who kick ass. Croaker is probably the most unremarkable (on the surface) of the characters above, but even he wouldn’t blink twice before cutting the throat of an enemy who threatened his mercenary brethren.

On top of that, a hero must strive. Passivity bores me. Whether I’m reading sword & sorcery or classic “literature,” I want the hero doing something, struggling to right heinous wrongs, pushing back against oppression, fighting for truth and justice. That’s what I try to impart to my own characters when I’m writing.

Well, I hope you enjoyed this list of my favorite heroes. Please add a few of your own in the comments.

“I want the hero doing something, struggling to right heinous wrongs, pushing back against oppression, fighting for truth and justice.”

Exactly! And love your choices.

Conan – “Conan is a paragon of freedom” – of course!

Croaker – ok, I can dig that. Know who stood out to me when reading it and still comes to mind first after all these years despite his brief appearance? Raven.

Sturm is cool and I agree with your assessment of him, but Caramon is more my style hero. And honestly, Raistlin ties with Lestat in first place as my all-time favorite characters. Characters.

Arya is one of my faves too. Arya and Jon (who isn’t as stupid in the books as the show makes him out to be) are my series faves, but her storyline most excites me.

Elric I’m not very well read of, so maybe my knowledge is incomplete, but I can live with or without him.

Molly I know nothing of, as I haven’t read the book.

I love Caramon, too, lovable oaf that he is. But Sturm always struck me as more heroic overall.

Raistlin is my favorite character from that first trilogy, but I don’t exactly qualify him as a “hero.”

Jason, you can’t open with that quote and close by listing Kane. While he was often doing something, it never had anything to do with the rest of that quote.

A hero I’ve become quite fond of is John Taylor, from Simon Green’s Nightside series. He strives, even when he knows it will end badly, and not just for him. Plus, he can often make hardened/horrific foes tuck tail and slink away just by saying, “I’m John Taylor.” (That one never gets old for me.)

Well, Kane does do all of those things (struggling, pushing, fighting) from time to time, but usually it’s against heinous wrongs and oppression that he himself was instrumental in causing … it’s only when he realizes that, no, the eldritch spawn of horrific ancient gods are not actually interested in an alliance of equals that he starts doing the right thing.

True, true. I’ll admit, I did hesitate to leave his name there after I’d typed and reviewed my list. I’m simply fascinated by the guy!

I’ll move him to my list of favorite characters – characters, Jon, not quite heroes 😉 – to create the (un)holy triumvirate of Kane, Raistlin, and Lestat. Dang. If not quite genuine heroes, certainly the three badasses I’d want to round out my foursome! Me, of course, filling the Conan role 😉

Hands down my favorite Fantasy hero is Ringil Eskiath from Richard K. Morgan’s THE STEEL REMAINS.

Although I agree with Elric and Conan and Jasons Kane, I’m Kull hasn’t been mentioned; I think he’s far more then just a Conan prototype, more then just another dude with big muscles and long hair, he’s cerebral and intelligent, a philosophical sort of hero and he’s just as interesting, if not quite as likeable as Conan.

I’d also have to mention Druss, I think Gemmel did a good job of making him appear larger then life and in-conquerable on the surface, but fallible at the same time.

Agreed on Druss, Connor. Gemmell did an awesome job just as you describe. I think Druss is terrific and I love to read of him.

How many GRRM readers have said to themselves, “I’ll just read until the next Arya chapter”? A Song of Ice and Fire has plenty of heroes, but most of the really heroic ones get themselves done in by their own idealism. Arya seems unlikely to make that mistake — she knows exactly what world she’s in.

I’d put James Enge’s Morlock the Maker on my list. He strives for all the things one wants a hero to strive for, while thinking sideways relative both to his world and to ours.

And I can’t leave out C.L. Moore, mother of us all, and her Jirel of Joiry.

I’d also agree with Kull, and that reminds me of Solomon Kane. And Bran Mak Morn, come to think of it.

Druss by a country mile. But if we’re talking Gemmell, we shouldn’t forget his other great creation, Waylander the Assassin. The genre is drowning in brooding anti-heroes who love slicing bits off each other, but Gemmell got their first, is often the better writer, and for all their faults, his lead characters come across as human, instead of maudlin self loathers in search of a bridge to jump off the genre is infested with at the moment.

And when I say got their first, I of course forgot REH and more or less contemporaneously to Gemmell, Stephen R Donaldson’s Thomas Covenant…

Too right Robert! I’m seriously getting sick of mopey, self-loathing heroes.
but you’re right; Wayalnder is a great character, and Gemmell was one of the first to write such a hero, still didn’t enjoy the Waylander books as much as the Druss books though.

But I’d have to disagree with John Carter; I like the stories, but I think Carter is just a delivery method as opposed to a great character and he’s a little arrogant if you ask me.
But Solomon Kane and Bran Mak Morn, definitely!
Oh! and don’t forget Michael Moorcocks Corum! He’s not as good as Elric (at least not in my opinion) and he’s still a tad angsty, but I kinda like him; he’s an image of shattered beauty, who can be gentle one moment and then brutal the next, and the hand of gwyn is almost as unpredictable as storm bringer.
I think Fletcher Vrendenburgh wrote a great post about him not too long ago: