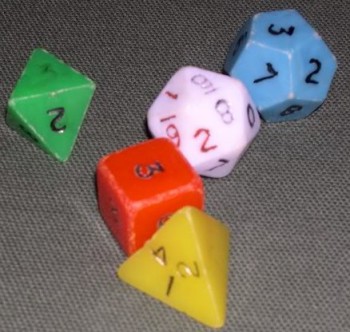 Of all the mysteries and temptations packed inside that wondrous cardboard sarcophagus known as the Dungeons & Dragons Basic Set, none was more hypnotic than that lumpy, ill-made set of five polyhedron dice.

Six-sided diced I knew, of course, but twelve? Eight? To say nothing of that canary-yellow four-sider. How did one even use it? What seemed perfectly obvious by the age of thirteen was a serious stumper at twelve.

And then there was the twenty-sider, a multi-faceted orb the color of sun-bleached PVC pipe (and not all pink, like the one depicted here), its numerical sequence uselessly repeated, 1-10, 1-10. Or, depending on how one read it, 0-9. Either way, how did it function as a twenty?

I believe it was a friend, and not the Basic Set rules, that told me how to solve this twenty-sided conundrum. “Color the die,” that was the advice I got. So I chose red — red for blood, I suppose — and I swiped my mother’s biggest, fattest felt-tip El Marko, and I colored that die, carefully, thoroughly, beginning with the zero that happened to be facing the top at the time. Voila! My first twenty-sided die.

My choice of which side to color proved unexpectedly fortuitous. My die, you see, was loaded. 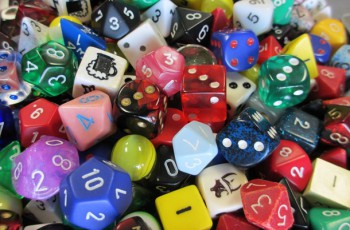 That ugly old die, to this day, displays a marked tendency to roll natural twenties. Double twenties are commonplace. Triples are far from unknown, and I once pegged five twenties in a row — in-game!

The lethality of my twenty became well-known in no time, and that die (touched up on a regular basis by my trusty El Marko) became both a running joke and a source of many an ethical debate. Did its use constitute cheating, or was it instead, when employed by a player character, rather like an extra attribute, a skill to be relied upon and celebrated?

One or two refs with whom I played requested that I not use it. I complied, of course. One or two players whom I refereed made similar requests. With the shoe on the other foot, I found I was not so quick to honor their wishes.

My position (then and now) came to this: it is the referee’s primary job to provide an enjoyable and challenging gaming experience. The word “fair” didn’t enter into it, at least not in the same absolutist manner as it would in a game of kickball, chess, or soccer. 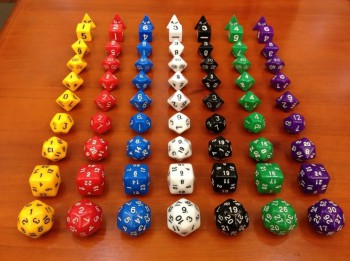 While I realize this is a point about which reasonable people might disagree, in combat in particular (especially where the players are having an unexpectedly easy time against a supposed tank of an opponent) the ref ought to intercede to make the encounter more memorable, visceral, and difficult. Avenues abound: adjust hit points; tinker with abilities; bring on an unlooked-for ally; and always always ALWAYS deploy the dread Loaded Die.

To be sure, honesty is the best policy and proper planning usually obviates the need for such deified interference. Also, “lying” on the part of the DM is a slippery slope, and therefore should cut both ways, such that if a roll results in the certain death of a PC, and that was in no way intended — should such a thing ever be intended? That’s really a separate topic. Maybe next time. Anyway, my point is that when a roll, by surprise, kills, then that, too, may be fudged, the damage downgraded, the outcome made kinder. Such moments are the single best rationale for keeping the majority of a referee’s dice rolls secret. 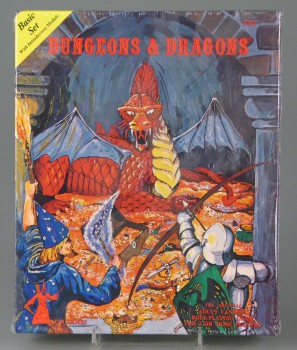 To this day, I enjoy a near-electric surge of excitement whenever I handle polyhedron dice. A mere rattle of the bones in my hand, and I know that once more the game is afoot, the wheel’s back in spin.

Sure, the dice-rolling phone app is nifty, but the real thrill has to be held, caressed, cradled, and perhaps whispered to with heartfelt entreaties and arcane, tremulous cries. Then, with a flick of the wrist that would make Nathan Detroit proud, the roll! The dice scatter, some landing where they should, others careening (invariably) to the floor, invoking the usual “Roll on the table!” catcalls and jeering.

Music to my ears.

The dice are newer now, classier, but I still roll my basic D20 whenever I get the chance. Quick, check the result! Is red showing? Yes!

Is it a twenty?

But of course it is, and another foe tumbles before the might of my plastic vorpal die.

Mark Rigney has published three stories in the Black Gate Online Fiction library: ”The Trade,” “The Find,” and “The Keystone.” Tangent called the tales “Reminiscent of the old sword & sorcery classics… once I started reading, I couldn’t stop. I highly recommend the complete trilogy.” In other work, Rigney is the author of “The Skates,” and its haunted sequels, “Sleeping Bear,” and Check-Out Time, forthcoming in 2014.

I still have those exact same dice — well, some of them, at least — although my copies came in my Gamma World boxed set; my Basic D&D was sold sans dice.

My first cheap dice set came with my boxed basic set (with the Erol Otus cover). It also came with a crayon to fill in the numbers and make them more visible.

Is anybody here familiar with the following story? I’ve always wondered if it were true: I can remember being told that early printings of the basic set came with numbered counters (instead of dice) that had to be separated and put in ziplock bags in order to be randomized for play. Is this true?

And who can forget the visceral, evil glee of rolling 18 six sided die for our fireballs once we’d reached maximum (at that time) level?

oh, and the crayon was the waxiest, worse crayon ever, uselss for marking in the blank numbers. Then a friend painted them in for me, glopping it on then wiping the surface, paint that has stuck to this day.

Yep, DM rolls were always done ‘behind the screen’, unless the dreaded black die was brought out, and usually the player rolled that for themselves, if they dared to.

Yes, some printings of the 1977 boxed Basic Set edited by J. Eric Holmes came with chits instead of dice. That’s because, at the time, there was no reliable source of polyhedral dice and TSR’s suppliers couldn’t keep up with the demand.

Hmmm … I wonder if my copy of the Basic set came with chits, then? If so, I don’t remember — just the blue rulebook and the copy of B2. And the lack of dice was the reason I also got a copy of Gamma World, so no complaints here.