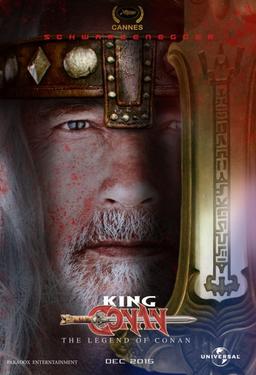 So here’s a fun thing. The King Conan movie poster at right, featuring Arnold Schwarzenegger as everyone’s favorite barbarian monarch, was spotted at the Cannes Film Festival this weekend, and is now making the rounds on the Internet.

Before you get too excited, the existence of the poster does not actually imply the existence of a movie… or even a soon-to-be-movie. Apparently, this is a thing at Cannes: using promotional posters to generate excitement among possible investors.

Still, it warms my heart. And it sent me on a hunt for the latest news of the next Conan film, which everyone seems certain will be announced Real Soon Now. Last summer, producer Fredrick Malmberg provided some details on the plot, clarifying that “this takes place AFTER Conan has been king… if we do this right, we can do two more Conan movies right after.” Andrea Berloff  took over script duties from Chris Morgan last October.

Schwarzenegger has expressed clear interest and has been tied to the film since word first leaked. In an interview last year, he shared his thoughts on the project:

The important thing with Conan is to make it into an A-movie, to treat it like a 300, or any of those great movies, rather than a B-action movie… The audience today, and the fans, are very sophisticated… They’ve seen it all. They demand something — when they see a Conan movie — that isn’t just a spectacle.

Opinion is divided on whether the final version will be called King Conan or The Legend of Conan. Whatever the case, we’ll keep you posted as things develop.

Yeah, I don’t think that poster is real. Fan made. Whether it was ever even at Cannes or smuggled into Cannes I don’t know.

I think a loose adaptation of “The Phoenix on the Sword” would be killer!

No one at Chris Morgan’s production company has denied making the poster… but they haven’t confirmed they did, either. So right now we’re just speculating.

It was originally reported via a May 17 tweet from TheArnoldFans, who are at Cannes:

If it means bringing back Thoth-Amon, I’m in!

Sorry to be the sourpuss, John.

From the International Robert E. Howard Fan Association Facebook page.
==
Ok this from Patrice Louinet from his French Robert E. Howard webpage on the subject of the “new” Cannes LEGEND OF CONAN film poster. Trust me, If anyone knows – it’s this guy.
Excuse the google translator.
“Nothing like a poster, rumor, etc.. to stir the collective noodle howardien blogosphere, especially when we talk about Arnold and Conan . Pages sterile discussions on your blogs, favorite sites and forums, all for brew wind and make click.
Our motto at robert-e-howard.fr, it’s a bit of the The Man Who Shot Liberty Valance , but reversed. We love the cold, clinical, brutally real, the true, not the Legend (Conan)) …

So all that to say that the so-called pre-show promotion and all that Legend of Conan that leaked yesterday (details here ) is nothing other than the work of a fan. Again, our information comes directly from Fred Malmberg , co-producer of the film.

You obviously have the right to operate this new (and citing the source! … :))
==

Patrice is the real thing. He’s in France and a long time REH scholar.

Believe it when I see it. I thought Arnold discussed dates in an interview and the movie would be past 2015 at this point, anyway. But maybe that’s just another rumor.

Either way – it got people talking, which is what posters are supposed to do. Fake or not 😉

Right you are. Tsk. I almost fell for the fan-made Doctor Strange poster last month, too. I’m a sucker.

But you’re certainly right it got us talking.

John O’Neill , Agreed! As long as they do him properly! Not like in Conan the Destroyer! Sacrilege!

BG’s review of Conan the Destroyer was some of the funniest writing on film I have ever read.