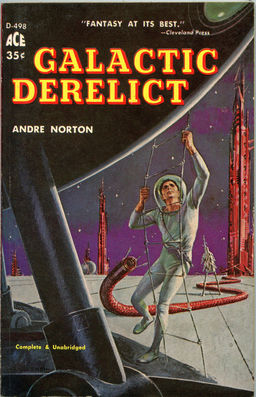 True, she continued to publish books steadily throughout the 70s, 80s, and even the 90s — though by the last decade of her life (she died in 2005), she was writing almost solely in collaboration with other authors. But it was her early Ace paperbacks that really stirred my collector’s soul. Perhaps it was the splendid covers. Here’s the back cover copy from the 1961 Ace paperback Galactic Derelict — with one of those splendid covers — reprinting a review from Galaxy:

“All the classic elements are present in full measure in Galactic Derelict. It suffers not at all in being a sequel to Andre Norton’s excellent Time Traders.

“The U.S. Army’s race with the Russians through and against Time remains Norton’s background. Both search for abandoned wrecks of a race that had interstellar travel back in man’s infancy.

“Travis Fox, Apache, joins Ross Murdock and Dr. Gordon Ashe, time agents, in attempting the transfer, intact, of an alien ship through 20,000 years to present. Inadvertently, controls are activated and the group is launched on an involuntary galactic tour. Their efforts to return to Here and Now constitute a top-notch science-adventure yarn.” – Galaxy Magazine

Galactic Derelict is part of Norton’s Forerunner universe. The other books in the series include The Time Traders (1958), The Defiant Agents (1962), Key Out of Time (1963), and others.

Galactic Derelict was published in 1959 by the World Publishing Company and has been reprinted in eight different editions over the last half-century. It first appeared in paperback from Ace Books in 1961. It is 192 pages in paperback, priced at 35 cents. The cover is by Ed Emshwiller. If I have a few moments this weekend, I may assemble some of the other covers to display them here.

I too have a ton of her old Ace 40 cent papaerbacks…that I haven’t read. (There’s just too much to read!) I have gotten around to three or four over the years – I read The Stars Are Ours a couple of years ago, after having the paperback for literally forty years – and found it very enjoyable. Not innovative in any way, but solidly constructed, fast moving, and optimistic withour wearing blinders. The reasons for her long popularity are evident in everything of hers that I’ve read.

That may be the best one-sentence review of Norton I’ve ever read. Bravo.

And yes, I have a great many old Ace paperbacks… that I haven’t read. They’ve very inexpensive, even today, sturdy, and really quite beautiful. Even if I never to get to read them all, I enjoy collecting them.

I find early Ace books much more collectible than any other paperback publisher – with the possible exception of the Ballantine Adult Fantasy series.