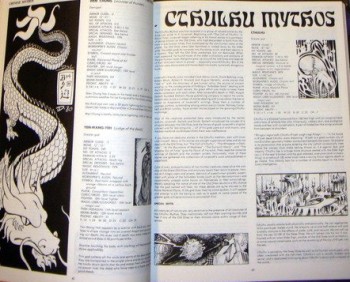 I’ve read dozens of H.P. Lovecraft’s stories, some of them (“The Rats in the Walls”, “The Colour Out of Space”) multiple times. I’ve studied his seminal essay Supernatural Horror in Literature. But I never have felt compelled to categorize all the various Great Old Ones and Outer Gods and work out their relationships in the overall “mythos” — for one thing, such an undertaking seems to undermine the intent of these Lovecraftian horrors, which was to represent the awful unknown.

August Derleth was among the first to go about classifying Lovecraft’s monsters in any systematic way, which tended to morph the work from pure horror into something more like metaphysical science fiction. Some fans have also criticized Derleth for using a Judeo-Christian framework for his classification, creating a dualistic good-versus-evil overlay that would be anathema to Lovecraft’s own worldview. The dissonance of this theme with the source texts threatened to jettison the original intent: conveying the cosmic terror of the mystery of existence and our precarious place in it.

Plugging Lovecraft’s cast of cosmic creeps into a Dungeons & Dragons pantheon and assigning stats to them (hit points, armor class, etc.) — as the 1980 first edition of Deities and Demigods did — seems vulnerable to this criticism to the utmost degree. Here are these totally foreign, otherworldly entities — and here’s how you defeat them! But it’s human nature. We love stats. We have to classify, categorize, label, and collate. It’s an inevitable progression that tends to water down the capacity of classic monsters to frighten (we’ve worked out how you destroy a vampire — stake to the heart, full exposure to sunlight — or put down a werewolf — silver bullet — or stop a zombie — head shot — so exhaustively that we have to come up with new variations and altogether new monsters to keep readers on the edge of their armchairs).

Still, I gotta admit it’s kinda fun to see what the game designers thought Cthulhu’s class levels should be, or how many hit points might be possessed by Nyarlathotep. If you’re going to introduce these beings into the hack ‘n slash realm of D&D, it’s bound to happen. 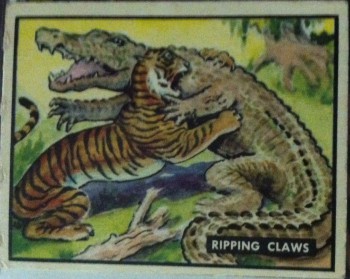 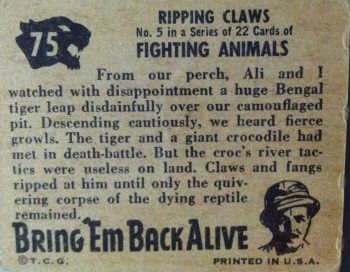 Such curiosity must stem from that age-old schoolyard question: Who would win in a fight — your dad or my dad? Which proceeds to virtually inexhaustible variations: Who would win in a fight — a tiger or a crocodile? [See image of the trading card from the ‘50s I recently acquired, which actually purports to answer this question (at least in the circumstance that the fight is on land).] Who would win… Superman or the Hulk? Merlin or Doctor Strange? Doc Savage or Tarzan? Elric or Conan? Galactus or Anti-Monitor? (Or, getting progressively more creative) Nyarlathotep or Dispater? Cthulhu or Orcus?

The other thing that must be said about this later-excised section of DDG is that it inspired Erol Otus to create some of the oddest, most bizarre, and original illustrations in his D&D oeuvre. This stuff looks like it burst straight out of the most trippy 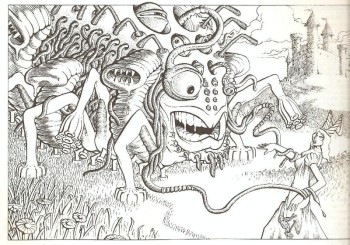 underground comics of the ‘70s. Man, it’s fun to look at, even as you’re having a laugh reading:

Yog-Sothoth exists on the astral plane. He has the ability to enter the universe at any point in space and at any point in time. His astral shape appears as a congeries of iridescent globes like giant soap bubbles. When he takes shape on the Prime Material Plane he is partly material and partly astral and appears as a gigantic mass of feelers, legs, and stalked organs. In this shape he will mate with human beings, producing the Spawn of Yog-Sothoth (see “The Dunwich Horror,” by H.P. Lovecraft).

Is it worth hunting down? If you’re a fan of old-school D&D and of Lovecraft, absolutely. It is such an odd amalgam of the two that you can’t help but be fascinated — even if you think the concept of a party of elven rangers, human sorcerers, and dwarven fighters taking on Shub-Niggurath, “the Black Goat of the Woods with a Thousand Young,” to be somewhat ludicrous.

On second thought, such horrors are more at home in the fantasy worlds of D&D than they are in our world — which is why your D&D characters will be less likely to have to make a saving throw against insanity when they discover such things exist. They run into that sort of stuff all the time. Just last week, your half-orc barbarian nearly had his brains sucked out by a mindflayer and your half-elven druid was almost compelled to French-kiss a lich.

“I nearly lost my mind twice last week. I don’t need to make a SAN roll!”

“Some fans have also criticized Derleth for using a Judeo-Christian framework for his classification, creating a dualistic good-versus-evil overlay that would be anathema to Lovecraft’s own worldview.”

Massive understatement! Not only fans, but it has been something of a crusade by S. T. Joshi and other Lovecraft scholars to dismantle this Derlethian moralizing of the Cthulhu mythos. For example, see Joshi’s Dissecting Cthulhu: Essays on the Cthulhu Mythos or his The Rise and Fall of the Cthulhu Mythos for excellent criticisms concerning this point.

C’mon! You have to do something on the Melnibonean Mythos! I take Jeff Dee’s work there to be as iconic as Otus’ of the Cthulhu mythos.

Ah, yes, the Derlethian Heresy. That’s one of the reasons I have trouble with some of Lumley’s Mythos stories — he really took it to heart.

I had read some Lovecraft when before borrowing my friend’s fully-loaded copy of Deities & Demigods, but this was my first introduction to many of the major players; and I do think the Cthulhu mythos lends itself more to this kind of usage than many of the others — Lovecraftian elements in sword & sorcery tales date back to Howard and Smith.

(And I should also mention: https://www.goodreads.com/book/show/21952903-sword-mythos?from_search=true)

I love Jeff Dee’s illustrations in DDG too! I have to confess, though, that I am not (yet) very well versed in the work of Michael Moorcock, so wouldn’t have much to say about the AD&D interpretation of his characters.

I am much better acquainted with Leiber’s Fafhrd and the Gray Mouser, so I am tempted to weigh in on the DDG interpretation of World Nehwon (a section that apparently survived the 1st-edition abridgment, although I’m not sure how long Leiber’s characters remained part of the D&D landscape).

Incidentally, there was also a TSR AD&D adventure module set in Roger Zelazny’s world of Amber (I remember using it in my campaign back in junior high). I’ve been trying to hunt down a copy with an eye toward revisiting it here.

In fact, lately I have procured some of the early modules that I remember most fondly. I’ll be moving on from DDG, for now, so that I can get to some of those.

Definitely, that Lovecraftian influence has always been there in D&D, not just directly from Lovecraft but indirectly through Howard and Smith and others (many of whom are acknowledged in Appendix N).

I never got a chance to play Call of Cthulhu, but I’ve always thought Chaosium’s introduction of Sanity points to track characters’ inevitable descents into madness = one of the coolest game elements ever.

My buddy actually had our D&D party go up against Old Ones and Mi-Go using the stats in this book. Lots of fun

I think if I had a rock band it would be called Nyarlathotep. Messenger of chaos–wow–that rocks!

I liked August Derleth’s stories whether or not they were heresy. I don’t think Lovecraft would have approved but….what the hey.

@Fletcher Vredenburgh: Your party must’ve been “epic”-level to take on the Old Ones and Mi-Go! What was the average class level of the party?

@Wild Ape: I haven’t read much of Derleth, but his story “The Panelled Room” was included by editor Peter Straub in The Library of America’s American Fantastic Tales: Terror and the Uncanny from Poe to the Pulps, so some of his stuff must be worth reading.

Nope, and they kicked our butts. If I remember right, they ended up fighting each other and we skulked away with.

@Fletcher The mental picture I’m getting is hilarious. Thanks for sharing that because it brings me back to the fun of RPGs and the not so victorious battles characters go through. I think every group has one or two of those kind of fights but you guys were up against the Mi-Go and the Old Ones!

@Fletcher Vredenburgh & Wild Ape: If a wisecracking player in the campaign were on his toes, he would’ve had his character look at the odds and declare, “Mi-Go now.”

@ Nick–(bwahahaha) That one was a Deep One for thought. Throw me a tentacle here.

I hate you both 😉

@ Fletcher That R’lyeh hurts my feelings.

I think I just failed my SAN roll.