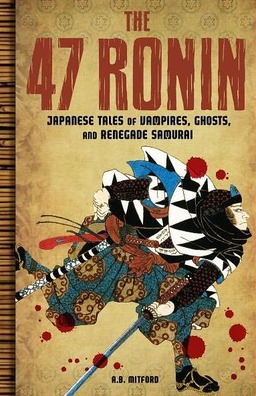 Two weeks ago I reviewed the film 47 Ronin, which Universal Pictures labeled a flop only a day after its U.S. release.

At that point the picture had earned about $85 million worldwide. That take has now increased to $116 million (according to BoxOfficeMojo), still well shy of its $175 million budget. Whether or not Universal’s premature announcement doomed the film, it’s now clear they weren’t wrong about its ultimate fate.

While browsing the remainder tables at Barnes & Noble yesterday, I stumbled on a curious title: The 47 Ronin: Japanese Tales of Vampires, Ghosts, and Renegade Samurai, by A.B. Mitford. I assumed it was a guerrilla tie-in; a cheap reprint timed to capitalize on the release of the movie. Except it was published nearly two years ago, in 2012, and there’s nothing cheap at all about the beautiful design, with striking endpapers and gorgeous color art on nearly every page.

I was right about at least one thing though: it is a reprint. It was originally published as Tales of Old Japan in 1871, one of the very first tomes to bring tales of Japanese monsters to Western shores.

Algernon Bertram Mitford was a British diplomat who later became Baron Redesdale. He developed a keen interest in Japanese folk tales while serving as attaché to the British delegation in Japan from 1866 – 1870 where, among other things, he witnessed the dissolution of the last feudal Japanese military government — the Tokugawa shogunate, ruled by the shoguns of the Tokugawa clans at Edo Castle — and the founding of a modern nation-state under Emperor Meiji.

Mitford was writing at a time when Japan was beginning to open to the West for the first time, less than 20 years after American Commodore Matthew Perry infamously sailed into Tokyo Bay with modern steam ships and explosive shell guns, gave the Japanese two white flags, and told them to hoist the flags when they wanted him to cease shelling the city and surrender. Perry forced the opening of Japan with the Convention of Kanagawa, and Mitford, writing a decade later, is a textbook case of white-guy-stupid, especially in how he’s perpetually surprised that the Japanese don’t greet Westerners with open arms and a bottle of warm saki.

This is taken from the intro to the first story, “The 47 Ronin”:

The first Western men who came into contact with Japan — I am speaking not of the old Dutch and Portuguese traders and priests, but of the diplomatists and merchants of eleven years ago — met with a cold reception. Above all things, the native Government threw obstacles in the way of any inquiry into their language, literature, and history. The fact was that the Tycoon’s Government… knew that the Imperial purple with which they sought to invest their chief must quickly fade before the strong sunlight which would be brought upon it so soon as there should be European linguists capable of examining their books and records. No opportunity was lost throwing dust in the eyes of the new-comers, whom, even in the most trifling details, it was the official policy to lead astray.

Mitford also fears that a rapidly-modernizing Japan may lose its fairy tales. Fortunately (according to him), Mitford and other white folk are here now to make sure that doesn’t happen.

The recent revolution in Japan has wrought changes social as well as political; and it may be that when, in addition to the advance which has already been made, railways and telegraphs shall have connected the principal points of the Land of Sunrise, the old Japanese, such as he was and had been for centuries when we found him eleven short years ago, will have become extinct. It has appeared to me that no better means could be chosen of preserving a record of a curious and fast disappearing civilization, than the translations of some of the most interesting national legends and histories, together with other specimens of literature bearing upon the same subject.

Still, for all his “white man’s burden” attitude and old-school stuffiness, Mitford has the soul of a poet, and clearly loves his subject. When he stops being an old white guy and finally turns his attention to the fairy tales of Japan, it didn’t take him long to win me over.

I beg my readers to fancy themselves wafted away to the shores of the Bay of Yedo [Tokyo] — a fair, smiling landscape: gentle slopes, crested by a dark fringe of pines and firs, lead down to the sea; the quaint eves of many a temple and holy shrine peep out here and there from the groves; the bay itself is studded with picturesque fisher-craft, the torches of which shine by night like glow-worms among the outlying forts; far away to the west loom the goblin-haunted heights of Oyama, and beyond the twin hills of the Hakone Pass — Fuji-Yama, the Peerless Mountain, solitary and grand, stands in the centre of the plain, from which it sprang vomiting flames twenty-one centuries ago…

In the midst of a nest of venerable trees in Takanawa, a suburb of Yedo, is hidden Sengakuji, or the Spring-hill Temple, renowned throughout the length and breath of the land for its cemetery, which contains the graves of the Forty-seven Ronins, famous in Japanese history, heroes of Japanese drama, the tale of whose deeds I am about to transcribe.

Mitford does his subject justice — and given the strength and power of the epic tales enclosed within, that’s saying something. Once I delved into the stories, I understood why this book has stayed in print, off and on, for nearly one and a half centuries.

The tale of the 47 Ronin is one the most famous example of bushidō, the samurai code of honor, in Japanese history, and it is considered by many the country’s national legend. Also included are tales featuring the red-eyed ghost of an executed man and his wife who haunt an ancient palace, the vampire cat of Nebeshima, mystical foxes with strange powers, and other legendary stories. A collection of classic folk tales that range from mysteries to fast-paced action tales, it is heavily illustrated with beautiful and authentic period art.

In this lavishly illustrated volume, A.B. Mitford presents ancient Japanese tales filled with action, romance, and the supernatural. Proud lords and their loyal retainers, a brave samurai and his faithless wife, a vampire cat, and howling spirits are all featured in the engaging stories that follow, including:

Appendices covering hara kiri and funeral rites conclude this collection of mesmerizing stories about Japanese life in days of yore.

While this is a sizable volume — 273 pages — it is heavily abridged from the original two-volume 1871 edition. This version contains five long tales:

So why should you purchase this edition of Tales of Old Japan?

Simple. The original two-volume 1871 edition was heavily illustrated with carvings drawn and cut on wood by Japanese artists, one of the first examples of the Japanese woodblock print tradition published outside the country (see left). Most of the later editions didn’t include any of those illustrations, but Milford’s text refers to the illustrations — many of which were done by an artist in his employment — with great pride.

The 47 Ronin: Japanese Tales of Vampires, Ghosts, and Renegade Samurai is beautifully illustrated in color, with authentic period art, on virtually every page. All art is credited in the back of the book; much of the spot art was drawn from public domain sources in the Library of Congress, and the gorgeous endpapers are drawn from Japanese Papers, published by The Pepin Press.

The much more detailed original illustrations from Tales of Old Japan are reproduced here as well — at least, 18 of them are, and I presume those are all the ones that accompanied the tales reprinted here, though I have no way to check.

The other reason to buy this edition is price: at just $8.98 for a thick full-color hardcover, it’s an incredible bargain.

The 47 Ronin: Japanese Tales of Vampires, Ghosts, and Renegade Samurai was published by Fall River Press in 2012. It is an abridgment of A.B. Mitford’s Tales of Old Japan, originally published by Macmillan in 1871. This edition was designed by Scott Russo, who did an excellent job; many of the design elements are drawn from the Scott Russo Archive. It is 273 pages, priced at $8.98. There is no digital edition, although I came across several digital editions of the source material while researching this article.

[…] Sengaku-ji in Japan, was first brought to the West by A.B. Mitford’s famous fairy tale collection Tales of Old Japan, and is perhaps the most famous example of bushidō, the samurai code of honor, in Japanese […]

I found and bought this at my local Barnes and noble as well. I haven’t had a chance to read it yet.

Barnes and noble has made several types of Japanese myth/history books.

One that I liked deals with Japanese ghost stories

You know, I think I saw that collection of Japanese ghost stories in the same remainder pile. Now I wish I’d picked it up too!

Oooh, this sounds like an excellent collection. Definitely worth pointing out those clips of “white-guy-stupid” — so many of the folklore collections from that era are weighed down by those perspectives! — but I’m glad it didn’t bog down his retellings of the tales.

I’m not familiar with that retelling… I see they’re trying hard to tie it into the movie, but I don’t see any connection (other than the same source material).

> Definitely worth pointing out those clips of “white-guy-stupid” — so many of the folklore collections from that era are weighed down by those
> perspectives! — but I’m glad it didn’t bog down his retellings of the tales.

Thanks. I was eventually able to ignore Mitford’s (highly) unenlightened comments and enjoy his enthusiastic retellings of these famous legends… but I’m certain there will be more sensitive readers who can’t. Caveat emptor.

[…] Revisiting A B Mitford’s The 47 Ronin: Japanese Tales of Vampires, Ghosts, and Renegade Samura… […]