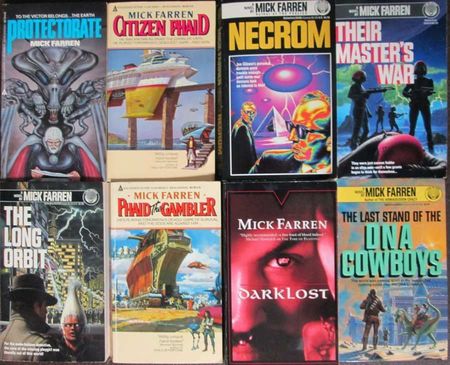 First time I heard of Mick Farren was when I opened a box of review copies from Tor in 1996 to find his novel The Time of Feasting, a dark fantasy concerning a hidden colony of vampires living underground in New York City. I flipped to the bio, where I read that Mick was the writer and singer for the punk band The Deviants, and that he also had several solo hits.

This was pretty cool. Here was a successful rock musician making a mid-career transition to dark fantasy writer. This just re-affirmed what I already knew: there were plenty of glamorous professions out there, but nothing as awesome as being a fantasy novelist. 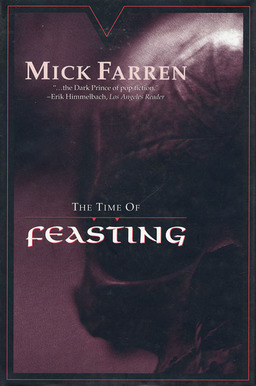 I half-suspected that Mick Farren would write a few goth-tinged vampire novels, then quietly return to rock music.

He did in fact release four more albums between 1999 and 2005, but he never abandoned writing — producing no less than 23 novels, most of them paperback originals, including the Phaid the Gambler books, the DNA Cowboys sequence, and four novels in the vampire saga that came to be know as The Renquist Quartet.

He also produced 18 non-fiction books, including four biographies of Elvis Presley; a rock memoir, Give The Anarchist A Cigarette (2002); and Who’s Watching You?: The Chilling Truth about the State, Surveillance and Personal Freedom (2007).

Lest that sound a little too much like a typical rock-n-roll journalist (is there such a thing as a typical rock-n-roll journalist?), his books also include a 70-year history of The Black Leather Jacket (2007); and Speed-Speed-Speedfreak – A Fast History of Amphetamine (2010), released in a compact format to look like a giant Dextroampethamine capsule.

While he wrote some pretty gonzo science fiction, his fantasy novels were where Mick Farren really got daring and experimental, with titles like the dimension-hopping Cthulhu mythos crossover Necrom (1991), and Jim Morrison’s Adventures in the Afterlife (1999), whose cast includes Moses, Jesus Christ, Dylan Thomas and Doc Holliday.

His last book was Elvis Died For Somebody’s Sins But Not Mine: A Lifetime’s Collected Writing (May 6, 2013), a thick collection of his columns for The Village Voice, The Los Angeles Times and other publications, which author Richard Metzger called “rock’n’roll polemics… The hidden history of the 20th century and beyond.”

Mick Farren died on July 27, 2013, at the age of 69. I never read any of his books while he was alive — and in fact was only dimly aware of a few of them as they were being released. I’m pretty well read in the industry, but Mick Farren was one of a handful of writers who successfully hid from me in the bookshelves over the years. If it weren’t for that Tor review copy in 1997, it’s entirely possible I would have never been aware of him at all.

I find it fascinating when I uncover writers who have escaped me as thoroughly as Mick Farren has… further evidence of just how vast and rich this industry is. I’ve been slowly collecting his novels in paperback, and purchased the eight pictured above just a few weeks ago.

I’m tempted by Protectorate and The Time of Fasting, but I think I’ll start my discovery of Mick Farren with The Long Orbit, a 1988 Del Rey paperback with a noir feel and this intriguing cover blurb:

For the make-believe detective, the case of the missing playgirl was literally out of this world!

I’ll let you know what I find.

[…] The Science Fiction and Fantasy of Mick Farren […]