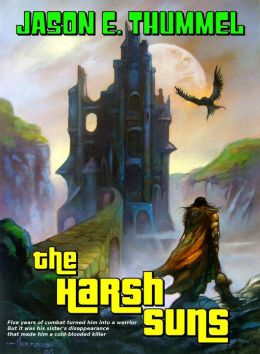 There I was, minding my own business, peacefully editing Connor Gormley’s Robert E. Howard tribute “Who Took the Flowers Out of my Prose?” and listening to him grouse about modern prose, when suddenly Conner took an abrupt right turn and started praising Black Gate author Jason E. Thummel.

Unfortunately, modern fantasy seems, for the most part, to neglect prose. And that’s a shame, because it means all those distinct literary personalities — the whimsy of Leiber, the melancholy of Moorcock, and the fury of Howard — are a thing of the past. Everyone seems to have adopted the same bland, middle ground style that isn’t really anything above functional…

Don’t get me wrong — there are a few standouts. I love Jason E. Thummel’s prose…

Well, that was a pleasant surprise. We’ve published three tales from Jason E. Thummel in the past 12 months — including the debut story in the Black Gate online fiction line, ”The Duelist,” which Adventures Fantastic said “Set a high standard,” and two stories of Gunnerman Clap, “The Gunnerman” and “Assault and Battery.”

Apparently it takes more than that to stay on top of Jason, however. Looking for an image to accompany Conner’s comments, I stumbled on the cover of Jason’s new book: The Harsh Suns, a handsome collection of three sword & sorcery tales published earlier this year.

I immediately ordered a copy and it arrived just in time to accompany me on my plane ride to San Francisco last Wednesday.

Here’s the back cover copy:

Five years as an enslaved conscript in a power-mad ruler’s unending conquests had turned Khalidoc Va Navreen into a skilled warrior. But it was an act of religious persecution and the disappearance of his sister that turned him into a cold-blooded killer.

For Khal, all hope of his sister’s survival is gone. There remains only to discover the guilty and deliver retribution — and he will stop at nothing to see it done. No matter the odds, no matter the obstacles, no matter where he must go, Khal will follow — until there is nowhere left to hide from his vengeance… under the Harsh Suns.

The Harsh Suns is a novella length collection bringing together for the first time the complete cycle of Khalidoc Va Navreen and his quest to avenge his sister. It contains the short stories “The Tower;” “The Harsh Suns;” and the novelette, “The Ascension of Arteman.”

The Harsh Suns is a slim little volume (91 pages) with a terrific price — just $5.95, less than a standard-sized paperback. The digital version is just $2.99 — check it out at both Amazon and Barnes & Noble.

Jason E. Thummel is also the author of the collection In Savage Lands, and  the two novels chronicling the supernatural adventures of occult detective Lance Chambers, The Spear of Destiny and Cult of Death.

I hope you’ll check out Jason’s books and support a new writer doing great things in the field of modern S&S. I’m glad I did.

I stumbled across this two weeks ago. When I saw it I thought to myself “how could this book have been released without being on John’s new treasures list.” My copy came in last week but I haven’t had a chance to read it yet.

I couldn’t agree more with Conner about the modern state of writing styles. It seems like some people are afraid that deviating from the norm with hurt their sales.

Correction, the search on smashwords didn’t find it, but going by author gave me this:

> When I saw it I thought to myself “how could this book have been released without being on John’s new treasures list.”

That’s what I thought!

> I couldn’t agree more with Conner about the modern state of writing styles.

Well, it’s easy to say that most modern writers can’t measure up, when you compare them with the finest fantasy wordsmiths of the 20th Century.

But look beyond the popular writers today, and I think you’ll find there are several talents that do shine. Connor already mentioned Jason E. Thummel, but I’d also like to point out folks like Catherynne M. Valente, Amal El-Mohtar, C.E.E. Cooney, Kelly Link, and a handful of others.

All five of those young writers are at the start of their career, and I expect critics will be comparing the writers of 2050 to them, saying things like “Why can’t authors today write like Catherynne M. Valente and C.E.E. Cooney? And pass me the brain implant; mine is a little dodgy.”

Every generation looks at the masters of the previous generation, and laments that young talent today just can’t cut it.

But… I love my Nook. And my Kindle.

Both those links appear to be dead. 🙁

When i click on those links, i get taken to the apropiate page on smashwords. Just checked again, works perfect for me.

If it doesn’t worlk for you, try searching for Jason E. Thummel on smashwords.

Yes, love your Nook and your kindle, i won’t judge you 😉 But my old Sony PRS and Calibre need some lovin’ too 🙂

I just tried again, and both links appear to work now. Weird.

I have lots of friends who swear by Calibre. I’ll have to try it some day. I spend several hours a day with my laptop, reclined in my chair, it seems I might as well give in and trying reading on it as well…

I will drop in just long enough to say that Kelly Link is not at the beginning of her career. I taught one of her short pieces seven years ago, and it had already been in print for a year before that, and I’d first encountered her prose some years before that. She may not be well known, even now, but she’s no beginner.

It has it …quirks.. but if you want to manage a large collection of ebooks, it is awesome. Also, it has support for my Sony eReader 🙂 However, it is basically a database. It has a build-in reader, yes, but its main purpose is to manage books (on different devices, searches, metadata, conversion, the works)

> I will drop in just long enough to say that Kelly Link is not at the beginning of her career.

She’s younger than I am, so I still consider her a young writer. 🙂

And sure, she’s been writing for over a decade (barely). But Fritz Leiber’s career spanned more than five decades… and I think we could safely still say he was at the beginning of his career in 1949, ten years after he published “Two Sought Adventure,” his first Fafhrd and Gray Mouser story.

Setting aside the matter of career length, I tend to follow the career adage “Beginning writers produce short stories, established writers produce novels,” and mark the separation of the two phases with the publication of the first novel. That’s not fair to folks who’ve focused chiefly on short stories (including Harlan Ellison and R. A. Lafferty, among others), but it’s still a common yardstick.

> However, it is basically a database. It has a build-in reader, yes, but its main purpose is to manage books (on
> different devices, searches, metadata, conversion, the works)

Huh. I could definitely use something like that, no question!

Yay I did something nice!!
Good to see mr thummel has released something new, I mean ‘in savage lands’ was just pure, unfiltered awesome, and it was cheap awesome too, my favourite flavour 😀
Time to whack out the ol’ kindle!
Thanks got mentioning me by the way, feel a little flattered to be honest 🙂

Just returning the favor. Thanks for pointing me towards IN HARSH SUNS.

I should have been more on top of things, but better late than never. 🙂

I would argue that, in fact, we currently are in a dip in the quality of fantasy writing but I will check out Thummel’s work in the hope of being proven at least partially wrong.

I forgot to add how much i love this cover! I’m not ashamed to admit it, I judge a lot of books by their covers.

> I would argue that, in fact, we currently are in a dip in the quality of fantasy writing

Well, you may be right. I just think that for those who really care about prose, there is still some excellent work to found. You just need to be willing to dig beyond the next bestselling fat fantasy.

> but I will check out Thummel’s work in the hope of being proven at least partially wrong.

That’s the spirit! I hope you enjoy Jason’s work. But just being willing to try a new author is a victory.

> I forgot to add how much i love this cover! I’m not ashamed to admit it, I judge a lot of books by their covers.

You can’t judge a book by its cover, of course. But as I’ve said before, you know what you can judge by the cover? The cover! And books with great covers are treasures all on their own.

I should have given credit to Didier Normand for his fine cover art here – my bad. I first noticed Didier for his classic work for Rogue Blades Entertainment, especially DEMONS and the upcoming ASSASSINS.

(Thanks to John R. Fultz for that top link!)

Talking about new talent, I don’t know how they compare to Kelly Link and that crowd, but I’m surprised no one has mentioned James Enge, Andrew Howard Jones, or Saladin Ahmed.

All three, in my opinion, are great new writers in the fantasy field.

It’s funny, but when I think of that crowd — with one World Fantasy, one Hugo, and one Nebula nomination between them — I think of them as well known writers. They ARE the establishment.

So when I suggest we “look beyond the popular writers today” to young writers starting their career, those aren’t the first names that come to mind.

But Saladin has only published one novel so far; Howard’s fourth comes out next month, and James has produced five. Maybe I am being a little hasty overlooking them as “new talent,” I dunno.

> So when I suggest we “look beyond the popular writers today” to young writers starting their career, those aren’t the first names that come to mind.

I see your point. Since they’re new to me, I guess that’s why I immediately classified them as such.