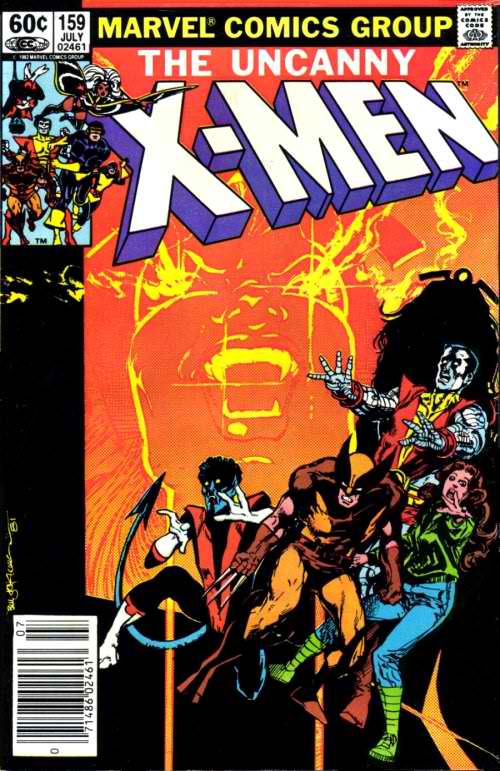 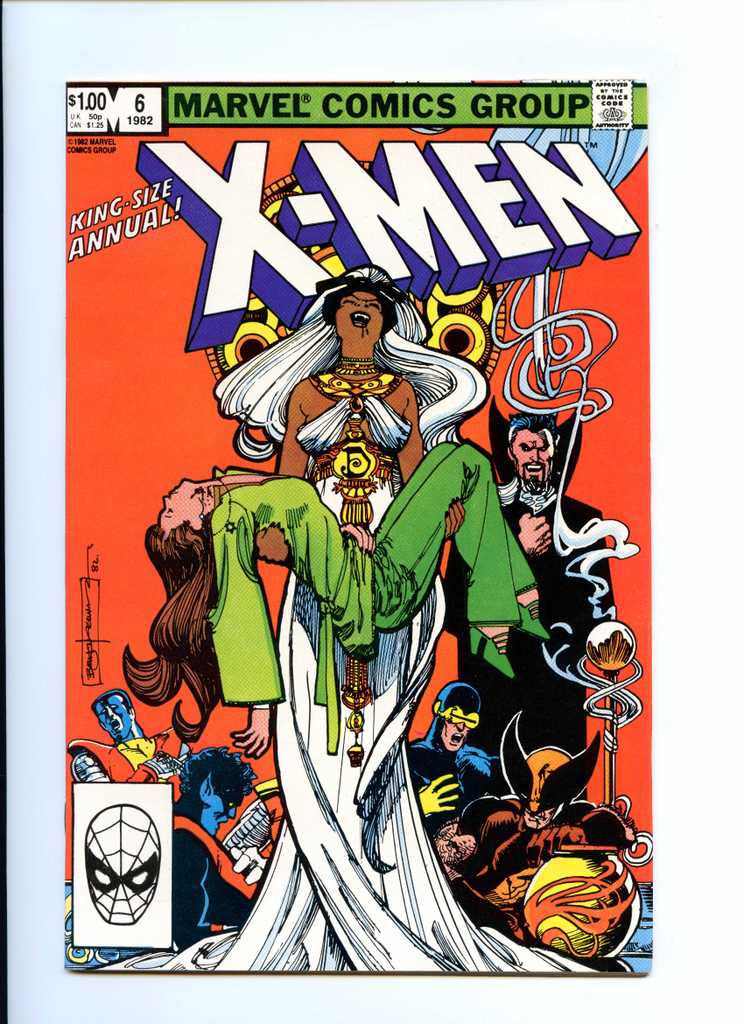 Bram Stoker’s immortal vampire had left an indelible mark on the comic book industry of the 1970s with Marvel Comics’ award-winning Tomb of Dracula series and its spin-offs. By the following decade, Marvel was ready to put the final stake in the now tired property. The storyline to rid the Marvel Universe of vampires was spread across multiple titles in 1982 and 1983, beginning with Marvel’s biggest title of the decade, The Uncanny X-Men.

Writer Chris Claremont and artist Bill Sienkiewicz kicked the storyline off in Issue #159 of The Uncanny X-Men in a clever update of the Stoker novel that sees Storm falling victim to Dracula. Claremont cleverly starts off with the team frantically rushing to the hospital where their friend has been taken because of dramatic blood loss stemming from a mysterious throat wound. Storm remembers nothing of the attack, has mystified the attending physician by her seemingly miraculous recovery, and yet is decidedly not herself as she exhibits a peculiarly morbid fascination. The one flaw is the story is too rushed. Claremont and Sienkiewicz’s handling of Dracula is the best since Marv Wolfman and Gene Colan, if lacking in their unique style and flair. What should have been a multi-part storyline is truncated to fit in a single issue.

Happily, the story served as a prelude to that year’s Uncanny X-Men Annual #6, which developed the storyline further with Storm struggling against Dracula’s hold over her soul; Kitty Pryde falling to possession by Lilith, Dracula’s daughter; Rachel Van Helsing turned into Dracula’s vampire bride; and the Lord of Vampires seeking once more the mystical tome, the Darkhold, which contains the Montesi Formula, the fabled key to wiping out all vampires from the face of the Earth. Once again, the fault is that the story needs far more space than it is allotted. It is a joy to see so many plot strands from Tomb of Dracula being taken up and it is clear that the story is building to a greater story arc, but these issues could have been so much more and with a talented writer and artist team such as Claremont and Sienkiewicz, it is unfortunate they were not. 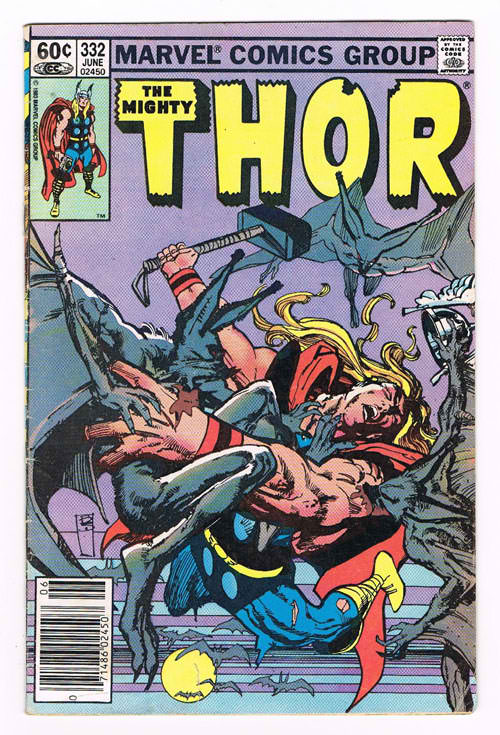 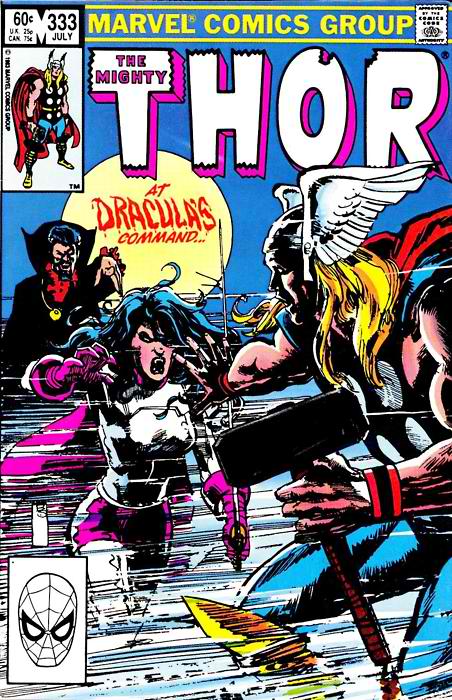 These were followed in 1983 by a two-part storyline in The Mighty Thor issues # 332 and 333. Scriptwriter Alan Zelenetz and artist Don Perlin’s tale is an overly simple one that sees Dracula, newly revived by a cult of Satanists in Chicago, quickly putting the bite on Thor’s wife, Sif. Perlin’s art shows the obvious influence of Steve Ditko in the first half of the storyline, but Mark Bright demonstrates a more modern style for the concluding half. It’s all quite routine and notable only for setting up Dr. Strange’s involvement in putting an end to Dracula’s menace once and for all.

Dr. Strange #59-62 chronicled Dracula’s last stand as Dr. Strange and vampire detective Hannibal King become aware that a Chicago-based Satanic cult has revived Dracula and the vampire lord is seeking the Darkhold. Roger Stern’s scripting is the strongest for the story arc and happily he has the most page count to develop the material. Dan Green’s art fits the material well and shows a nice visual continuity to both past issues of Tomb of Dracula, as well as the character’s recent appearances in The Mighty Thor.

The second chapter sees Dracula and his cult members enacting an assault on Avengers Mansion in New York City, where the Darkhold is kept in storage. Dr. Strange foresees the assault and mystically teleports the tome to Baron Mordo’s abandoned castle in the Transylvanian Alps. The setting may be appropriate, but one cannot help but snicker at Strange considering it a safe place to hide something the Transylvanian vampire seeks. 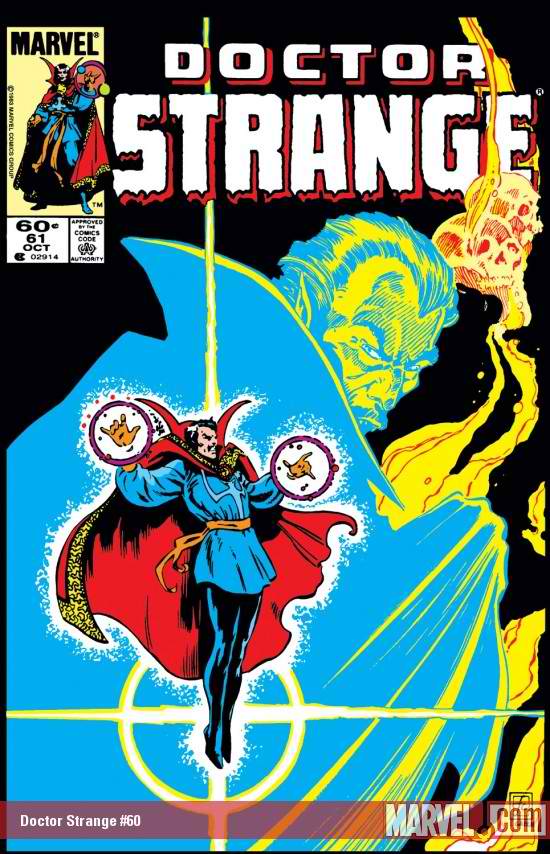 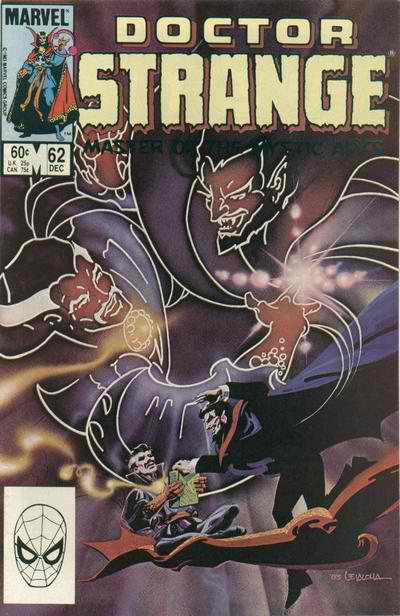 The penultimate issue in the story arc sees the action shift from New York to Transylvania. Hannibal King has gathered Frank Drake and Blade the vampire hunter to support Doctor Strange and the group travels by jet to Baron Mordo’s castle. While the magician prepares himself to enact the Montesi Formula, Dracula approaches Mordo’s castle.

Steve Leialoha replaces Dan Green as artist for the final installment. Sadly, he lacks the influence of Steve Ditko which makes the central astral battle between Dracula and Doctor Strange somewhat of a disappointment. Frank Drake, Hannibal King, and Blade are too easily dispatched by the vampire lord and barely delay him in reaching the magician. Happily, Strange triumphs and recites the Montesi Formula. Dracula and all other vampires in the Marvel Universe crumble into dust (including Harold H. Harold and Lilith, the daughter of Dracula). Hannibal King survives the ordeal (after several blood transfusions) and is left human once more in a surprisingly happy ending.

Marvel’s Editor-in-Chief at the time, Jim Shooter, may have not been the biggest fan of the series, but the story arc removing all vampires from the Marvel Universe was not without its pleasures. While the epic may not have realized its full potential, it at least tried its best to honor the past by tying up as many old plotlines as possible and giving many of the supporting characters from Tomb of Dracula a fitting end.

You might be interested to know that the most recent episode of Marvel’s Avengers Assemble, featured Dracula as the main villain. The story has been much changed.

Back in the 1970s (through the early 1980s), Marvel was licensed to use a variety of copyrighted characters (Fu Manchu, Shogun Warriors, Rom, Godzilla, Micronauts) in their titles. Once the licenses ran out, these characters were once again off-limits (which is why there are so many Marvel titles from this era that won’t be reprinted). As a result , in the 1980s, there were a number of storylines intended to “wrap up” these licensed characters in ways that no one would wonder why they were no longer appearing (Shogun Warriors were destroyed, Fu Manchu died, Rom returned to his home planet).

The “wipe out all vampires” plotline has all the signs of being one of these wrap-up plotlines, except by this point, I believe Dracula was in the public domain, so there would be no good reason to kill off such a high-profile character. Of course, other horror characters (Werewolf by Night, The Living Mummy, The Monster of Frankenstein) were also being cancelled, so maybe it was just Marvel moving out of the waning horror market.

Offhand, does anyone know when Dracula entered the public domain?

Mr. Maynard may answer this more fully, but Stoker did not properly register with the US authorities, so it stood as public domain in the US from initial US publication. For the Berne Convention, it slipped into the public domain in 1963. Stoker could not have trademarked the title anyway, just as someone could not trademark “Tojo” or “Jack the Ripper” or “Ghenghis Khan” or “Caligula” or “Nero” or other historical figures.

Someone wrote an overview of this attempt to use the “classic monsters” in the 1970’s. I find it intriguing that a similar use of “classic adventure heroes” from literature does not seem as common. (Conan as something of an exception, I suppose). Then again, one might wonder how many prose derived adventure heroes from prior to mid-1938 other than Sherlock Holmes, Zorro, Tarzan, Buck Rogers, and a few others receive many homages. (Roy Thomas and then David Anthony Kraft wrote a Tarzan series in the 1970’s, and the same company later adapted Zorro in the early 1990’s.)

Someone posted an answer to Michael’s question that appears to have been lost in the ether, but they were correct in stating that DRACULA was public domain long before Jim Shooter decided to remove vampires from the Marvel Universe. TOMB OF DRACULA had been a successful, award-winning series. By the end of the 1970s, sales were dwindling. Shooter gave the series an extension as a magazine free from the Comics Code Authority, but it failed to make an impact. The decision to wrap up the storylines was both a nice way to give the series a proper ending and generate interest in mainstream Marvel titles from a small but devoted cult of readers who might not otherwise have followed conventional superhero titles.

My apologies to the gentleman who posted information on the Berne Convention and Stoker’s failure to properly file copyright for his work in the first place. If you are able, please re-post your response.

Mr. Maynard may answer this more fully, but Stoker did not properly register with the US authorities, so it stood as public domain in the US from initial US publication. For the Berne Convention, it slipped into the public domain in 1963. Stoker could not have trademarked the title anyway, just as someone could not trademark “Tojo” or “Jack the Ripper” or “Ghenghis Khan” or “Caligula” or “Nero” or other historical figures.

To elaborate on the above, Stoker died in 1913, so 50 years from the death of the author for the Berne Convention.

Someone wrote an overview of this attempt to use the “classic monsters” in the 1970′s. I find it intriguing that a similar use of “classic adventure heroes” from literature does not seem as common. (Conan as something of an exception, I suppose). Then again, one might wonder how many prose derived adventure heroes from prior to mid-1938 other than Sherlock Holmes, Zorro, Tarzan, Buck Rogers, and a few others receive many homages. (Roy Thomas and then David Anthony Kraft wrote a Tarzan series in the 1970′s, and the same company later adapted Zorro in the early 1990′s.)