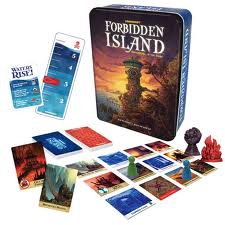 The ancient Archeon empire is long gone, but their legacy remains. You are part of a group of adventurers who has landed upon their lost island, seeking their mystical treasures. Unfortunately, the Archeons cursed the island so that if any sought their talismans of power, the island itself would seek to destroy them … can you find and secure the four sacred treasures and get your party – your entire party – back to the helicopter, evacuating the island before it is too late?

That is the scenario of Forbidden Island (Amazon), an award-winning cooperative board game. As a cooperative game, it’s a bit more useful to discuss how to lose the game than how to win it:

In other words, victory means:

The island is represented by tiles that are shuffled and laid out to create the island. There are 6 possible different characters, each of which has a different special ability. On each turn you get three actions, followed by drawing two Treasure cards and then drawing Flood cards. Some of the Treasure cards are “Waters Rise!” cards, which gradually increase the number of Flood cards that are drawn on each turn … and which in turn increase the rate at which individual tiles flood.

There are a handful of actions available for your three actions:

Once done with your three actions, you draw two Treasure cards. If the card is a “Waters Rise!” card, then you shuffle the discard pile from the Flood deck and put it on top of the Flood deck. You also move the Water Level Marker up on the Water Meter. Every two or three times you pull the Water Rises! card, you’ll begin pulling an extra card during the Flood card phase.

Draw a number of Flood cards based upon the number shown on the Water Meter. Each Flood card shows a location from one of the Island tiles. If the location is un-flooded, then flip it over to show the “flooded” side of the tile. If it is flooded, then that location now sinks and both the Flood card and tile are removed. Anyone on the sunken location has to swim to an adjacent tile (except for the Diver or Pilot, who have some extra maneuverability in this situation).

Strategy & Feel of the Game

This game has some really strong components to it. For one thing, as you may know if you’ve read some of my previous reviews, I have young children, so am a big fan of cooperative games. In Forbidden Island, everything is out in the open and collaborative strategizing is part of the game, making it a perfect family game. The box says ages 10 and up, but my 8-year-old son fully grasps the strategy of this game without a problem … though, in fairness, he’s an extremely savvy gamer for his age. My 3-year-old loves the game because, even though he doesn’t fully grasp all the rules, we can explain the different options to him fairly easily. He doesn’t always make the wisest choice – and sometimes he’s cost us the game because of it – but it’s clear he appreciates being involved in a grown up game that he can at least basically understand. There’s nothing quite like hearing the enthusiastic squeal of a three year old exclaiming, “Daddy! We didn’t die this time!”

The basic strategy involves a balance between trying to shore up the island so that it doesn’t sink under you and also trying to get the various Treasure cards quickly enough to get the treasures and get off the island. If you reach the top of the Water Meter, the game is over regardless of whether or not any of the island has sunk yet, so the game does have a built-in time component to it.

If you want to see the game being played, then you’re in luck, because it was featured in an episode of Wil Wheaton’s TableTop which included acclaimed science fiction author (and recently-dubbed PC Monster of Genre) John Scalzi.

On a related note, allow me a moment of digression:

If you’re reading this between July 16 and July 22, then I have a science vlog that’s currently a finalist  to join the Geek & Sundry YouTube channel’s new vlog network. That’s right … I could become a co-worker (of sorts) with Wil Wheaton, if I get enough votes. So please, watch the video and vote if you like it.

If it’s after July 22 … well, then the voting is over, but you can still check out my own YouTube channel, where I’ll be continuing the vlog series.

In addition to the physical game itself, it’s also available as an iPad app. The iPad game has some variant map layouts, but these weren’t in the physical game. Fortunately, some digging on the Internet tracked them down. I was able to print this page out and insert it into my rulebook for handy reference, to keep things mixed up in the physical version of the game.

Overall, there’s really nothing negative I can say about this game. It is an outstanding cooperative game that’s fun for all ages, and for experience levels ranging from hard-core gamers to casual gamers to novices. Once you play a couple of times, the set-up is extremely quick and the game itself goes quickly as well. I guess if you’re highly competitive and don’t like games where all of the players either win or lose together, then you wouldn’t like this game … but that’s about the only way I can imagine you wouldn’t enjoy it. I would be hard pressed to think of another game that I could recommend quite as universally as this one.

Other Board Game Reviews:

Disclaimer: A review copy of the game was provided by the publisher.

This game is perfect for children. Between the theme and the fact it’s a coop it’s great for those siblings who always argue over a game.

I think it kind of falls flat for adults though. But that could be just me because I see a lot of people on BoardGameGeek.com who seem to love the game enough.

Love these game reviews by the way.