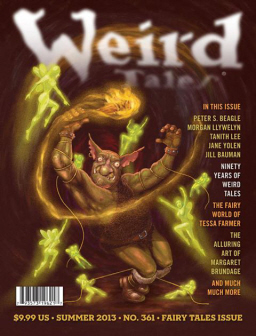 The latest issue of the world’s oldest — and arguably greatest — fantasy magazine is now on sale.

There’s also articles from Darrell Schweitzer (“Ninety Years of Weird Tales“), an interview with J. David Spurlock on the artwork of Margaret Brundage, and “An Inside Look at Weird Tales,” a step-by-step look at the evolving cover concept for this issue, by editor John Harlacher and artist Jeff Wong.

It’s always a delight to see a new issue of Weird Tales, especially one as jam-packed as this. This fat issue contains no less than 19 stories and four poems, alongside several feature interviews, book reviews, and copious interior art.

The PDF review copy we received is beautifully laid out and easy to navigate and read. This is the second issue produced by Nth Dimension Media, under new editor Marvin Kaye.

“The Queen Who Could Not Walk” by Peter S. Beagle
“Magpied” by Tanith Lee
“Fae for a Day” by Teel James Glenn
“I Am Moonflower” by Nicole Cushing
“Blind Alley” by Morgan Llywelyn
“Suri & Sirin” by Court Merrigan
“The Flowers of Tir-na-nog” by J. R. Restrick
“The Miracles of LaGuardia Airport (Delta Terminal)” by Caitlin Campbell
“A Gnomish Gift” by Alex Shvartsman
“Enough” by Jane Yolen
“Gold” by Lauren Liebowitz
“The Brown Man of Glen Gardens” by Frank Aversa
“The King’s Enemies” by Marc Bilgrey
“The Crimson Cloak” by Zach Shephard
“The Lute Player and the Mask” by Dick Baldwin
“Payment” by Alfred Vickers III
“Out of Time” by Manny Frishberg

With Tessa Farmer (on her fascinating and strange fairy world) by C. J. Thom
With J. David Spurlock (on Margaret Brundage) by Lynne Jamneck

Weird Tales is edited by Marvin Kaye and published by Nth Dimension Media. This issue is 112 pages, priced at $9.99 for the print edition and $6.99 for the digital version. Covers and interior art are by Jeff Wong.

See the complete Table of Contents here, and purchase digital copies of recent issues (including this one) here.

We last covered Weird Tales with issue 360, in October of last year.

Must start checking the mailbox.

Since the whole Pearls incident, I’ve been pretty much done with Weird Tales. At least until there is a new editor or publisher.

Hope it doesn’t take too long!

> Since the whole Pearls incident, I’ve been pretty much done with Weird Tales. At least until there is a new editor or publisher.

Yeah, I understand what you mean. (And for those confused by the ‘Pearls’ reference, we covered that particular crapstorm last August; see link below.)

But I’m not prepared to dismiss the entire magazine. Black Gate is ready to criticize where warranted (as we did last October), but I believe that comes with an implied responsibility to praise where warranted as well. You can’t do that without paying attention.

When Weird Tales publishes great issues, we’ll let you know. Up to you if you want to support the magazine at that point… but there aren’t many outlets left for weird short fiction.

WT apologized for that whole mess last year, and has been working hard to put it behind them. I think we should give them the benefit of the doubt.

I should check — I think I have something pretty close to a complete run since the Terminus revival back in the 1980’s — love those first few years of digest-sized issues.

And I look at the names of the contributors — Peter S. Beagle, Tanith Lee, Jane Yolen, Darrell Schweitzer — yeah, I can work with that.

Thanks Doug! Glad to hear it.

> I think I have something pretty close to a complete run since the Terminus
> revival back in the 1980′s — love those first few years of digest-sized issues.

You’re not the only one! There was something about those perfect-bound Terminus issues that made them oh-so-collectible. I thought they had great covers, too.

Excellent! I have a PDF version, but to me nothing replaces the feel of having the magazine in your hands.

Thanks for letting us know.