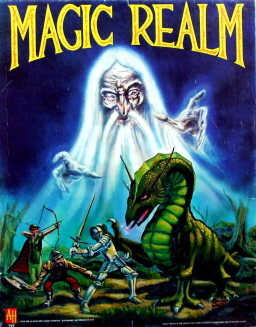 Magic Realm, designed by Richard Hamblen and released by Avalon Hill in 1979, is adventure fantasy role-playing wrapped up in a board game. No surprise, given the time. It has a complexity rating of 9 on Avalon Hill’s 10-point scale, is loaded with chits, and has a rule book approaching 100 pages of two-column small print.

In modern parlance, Magic Realm has crunch. And all that crunchy goodness is now available for free on your computer.

Before we examine the computer version, let’s have a look at the basics of play. There are sixteen characters for players to choose from in Magic Realm. Most of the usual tropes are covered: White Knight, Black Knight, Amazon, Wizard, Elf, Dwarf, etc.

Players choose their own victory conditions, setting goals of Gold, Fame, Notoriety, Usable Spells, and Great Treasures. They travel roads, caves, hidden paths and secret passages that stretch across the twenty tiles making up the board, and you’re not likely to see the same board configuration twice.

The exploration element is handled well. Goblins and dragons both show up on a tiles with caves, but until you get to a tile and hear a howl or roar, see the ruins or smell the smoke, you don’t know if goblins, dragons, neither, or both live there.

And knowing is critical. The White Knight can probably take a dragon, but a group of goblins will overwhelm him. The Amazon, on the other hand, can’t scratch a dragon with her starting equipment, but she can usually work her way through a half-dozen of the weakest goblins. (The Elf doesn’t care either way, as he can run away from both.)

A character’s combat abilities are defined by a vulnerability rating and twelve chits covering offense, defense, and magic. The numbers, letters and asterisks on this handful of chits serve up a combat system that incorporates offensive maneuver vs. defensive maneuver, speed of attack vs. speed of defense, reduction of ability through fatigue and wounds, extra effort required for stronger and/or faster attacks, damage through armor, damaging/destroying armor, and armor effectiveness against blunt/sharp weapons.

Once you know the system, it’s straightforward; but this is a daunting section of the rules. And that’s before throwing in scores of treasures and spells that can affect combat.

Dice play no part in a player vs. player battle unless someone is using a missile weapon or certain spells. It comes down to knowing each other’s abilities and out-guessing the other player.

Dice do play a role when fighting monsters or natives, but in choosing maneuvers for them, not in determining if an attack hits or how much damage it does.

This means a player will have a very good idea whether or not a fight is winnable before it starts. Traveling the board, the Swordsman, who is light and fast, knows he can run away from almost any monster on the board, but not the giant octopus guarding the Pool (which, being one of the largest treasure piles, is a very tempting target — I’ve lost a lot of swordsmen there).

The environment providing color magic is a very nice element of the game. Enchanting a board tile (flipping it over) causes color magic to be present on the tile, but it can also significantly alter the configuration of the roads, hidden paths and secret passages.

The game can be frustrating. Death rides a very swift horse and favors your blindside. Worse, while the role of dice in combat is limited, they are everything when it comes to the all-important task of searching, and this dice mechanic is brutal by design. You can spend many turns searching for a much-needed treasure location or hidden path that you can see on the board but your character can’t find.

But there are times when the game delivers exactly what it’s shooting for. The White Knight, seizing an opportunity, fatigues himself in order to attack faster than some house-sized monster can evade. The Black Knight picks up the War chit and leads three groups of natives in battle against three other groups of natives.

The Swordsman finds the Remains of Thief, getting his hands on the Living Sword, or finds the Lost Keys that let him unlock the Vault. The Sorcerer takes control of a dragon and sends it charging into a hoard of goblins.

In my youth, I would take notes of my (mostly solo) game sessions, adding narrative to spin them into stories.

A second edition of the game was released in 1986, but it has been out of print since Avalon Hill was sold in 1998. The game, however, had a cult following, and some of the cultists went to work.

Eventually RealmSpeak, a Java implementation of Magic Realm, took form. It implements an unofficial third edition of the rules — unofficial, but with input from Richard Hamblen. The third edition rule book is 122 pages and includes a nice spread of optional rules developed over the years.

For Magic Realm fans, RealmSpeak is both a godsend and an annoyance. It reduces the 30 minute setup time to a few minutes, it doesn’t leave the rules open to interpretation (I discovered I was playing it incorrectly all those years ago), and it allows for networked play.

On the other hand, it is designed for those who already know the game, it is an exact (click heavy) implementation of the game, and it does occasionally lock up — not enough to keep me from playing, but enough for me to say “Not again!” when it happens.

My heart goes out to those who try to learn Magic Realm by playing RealmSpeak, but for those already familiar with it, RealmSpeak can breathe new life into the game.

Our most recent coverage of Avalon Hill fantasy games includes:

[…] another copy, and put that one in the Cave of Wonders, next to Dragon Pass, Dark Emperor, Wizards, Magic Realm, and other Avalon Hill fantasy […]

[…] — but who needs all that stuff when you can play a board game by Avalon Hill, publishers of Magic Realm and […]

Black Gate » Blog Archive » BattleLore: You Got Your Goblins in My Hundred Years War!

[…] Stehman’s last reviews for us were Magic Realm and […]