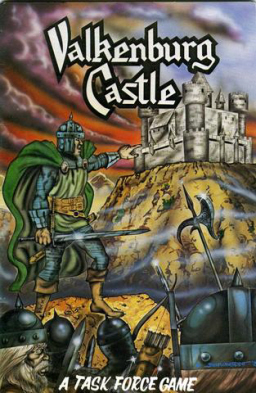 All this recent talk of Star Fleet Battles and Metagaming’s classic microgames like Ogre and Wizard has me thinking of other great pocket games of my youth.

Now, “great” is a relative term. The elements that make a typical fantasy board game great — things like style, richness of setting, and diversity of play — don’t apply to microgames. The things that make a pocket game great are inventiveness, fast play, and simplicity.

Although a great setting and a little style don’t hurt, either.

Task Force Games was the king of pocket games in the early 1980s. Much of that was by virtue of its one runaway success, Star Fleet Battles; but it had an impressive line of other fantasy and SF titles, including Swordquest (which I discussed last June); Starfire (which eventually inspired a series of science fiction novels from David Weber and Steve White); Intruder, which pits a desperate crew against a lethal alien in deep space (clearly inspired by the movie Alien); Spellbinder; City States of Arklyrell; and over a dozen more (there’s a nice survey here and a complete list here).

But Valkenburg Castle was the first, and it’s still my favorite. It was almost completely unique in 1980 — a board game that captured the essential gestalt of fantasy role playing, although in a slightly abstracted fashion: penetrating a dark and foreboding stronghold, confronting the unwholesome creatures within, and winning glory through cleverness and force of arms.

The premise of Valkenburg Castle was simple. You play as the young Lord Hobart van Valkenburg, rightful heir, returning at last to the place where his grandfather was murdered and his family first driven into exile. The castle is now monster-infested, home to sinister and powerful beasts who lurk somewhere in its depths.

To win back his ancestral home, Lord Hobart must explore the twisting ruins of a castle he has never before seen and drive out the dark forces who have made it their home — including the powerful creatures who lair at the deepest dungeons levels.

It was an appealing variation on the classic loot-and-scoot dungeon mechanic, with the added bonus of a compelling backstory, a loyal army, and a chance to win back a crown. What’s not to like? 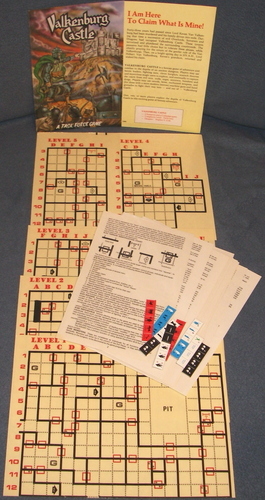 The Jack Kirby-inspired cover art perfectly captures the theme and raw energy of the game. Guys with swords, in a uphill battle. That’s the concept right there.

Forty-three years had passed since Lord Keven Van Valkenburg had been murdered and his family driven into exile. During that time a succession of evil Overlords, Sorcerers and Dragons had occupied Valkenburg Castle. These tyrants terrorized and plundered the surrounding countryside. The peasants had little choice but to tolerate these abuses, while silently praying for the return of the gentler rule of the Van Valkenburgs. Then, on a bright spring day in 575 A.H., Lord Hobart Van Valkenburg, Keven’s grandson, returned and staked his claim.

Valkenburg Castle is a fantasy game of adventure and combat in the depths of an ancient dungeon. Players may use heroic leaders, fighting men, clever burglars, staunch dwarves and mysterious magic users to explore, and eventually to capture the castle from evil orcs, trolls, ogres, sorcerers, banshees and drogs. Players may use swords, bows, enchanted weapons, and (for those with a more modern interest) machine guns and hand grenades to fight their way into – and out of – Valkenburg Castle.

One, two, or more players explore the depths of Valkenburg Castle in this exciting game of fantasy adventure.

The game components are at right, including a portion of the dungeon map. The castle is vast, and includes an impressive dungeon level. Not bad at all for a pocket game.

I found the addition of an army — small, but loyal — nicely enhanced the basic RPG formula. Controlling your forces while you clear out the castle, discover treasure and magic, and seek the dark heart of the opposition is the core of the game, and it certainly keeps you occupied.

The variety of monsters you face off against isn’t quite as rich as the back text implies, but that’s a minor quibble. The game is easy enough to expand on as you grow more familiar with it.

Like most games, adding more players results in some much-needed depth and complexity. It is suitable for 1 to 5 players, with an average playing time of two hours.

There is a real Valkenburg Castle, incidentally, in Valkenburg aan de Geul, Netherlands. Originally constructed in 1115, Holy Roman Emperor Henry V destroyed it by siege in 1122. The current ruins are those of the rebuilt 14th century structure. There are some nice pics here that help capture the atmosphere of the game.

Valkenburg Castle was designed by Stephen V. Cole (of Star Fleet Battles fame). It was originally released in 1980 by Task Force games, with a cover price of $3.95. Copies sell today between $6 – $20.