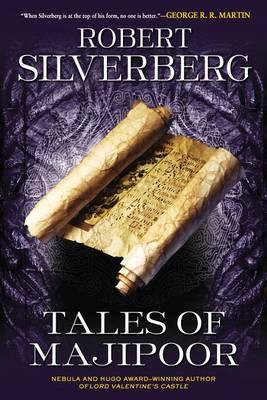 Robert Silverberg’s last post at Black Gate was “Are the days of the full-time novelist numbered?” (which, as I recall, generated a lot of debate, including an intriguing counter-argument by Jerry Pournelle.)

His post seemed like a good excuse to finally get around to reading Lord Valentine’s Castle, the first novel in his Majipoor Cycle. It’s one of the few major fantasy series I haven’t tried, and I’ve long been intrigued by its science fantasy setting. Majipoor is a vast world, much larger than Earth (but much less dense, hence with a comparable gravity), settled by a host of bizarre alien races who co-exist more-or-less peacefully with the shape-changing natives, the Piurivar. It’s is a low-tech planet where agriculture is the main occupation, but numerous artifacts of a space-faring culture dot the landscape, some of them quite mysterious — the perfect stage for some grand adventures.

Lord Valentine’s Castle was highly acclaimed when it first appeared in 1980, garnering a Hugo nomination and winning the Locus Award for Best Fantasy Novel. Five more novels followed, including Valentine Pontifex (1983) and Sorcerers of Majipoor (1997), and one collection, Majipoor Chronicles (1982).

In the two decades since that last collection, Silverberg has published some major short work set in Majipoor, including:

All seven of these tales are collected in Tales of Majipoor, the new collection from Roc that goes on sale this month. I found Lord Valentine’s Castle buried under review notes, still unopened, only a few weeks after I took it down to read it. But that’s okay, because Tales of Majipoor looks like an even better way to take my first steps unto this vast planet.

If you don’t mind suggestions from complete strangers, I would start Lord Valentine’s Castle. It is a charming book and a perfect intro into Majipoor. In fact, the first three books (LVC, Majipoor Chronicles, Valentine Pontifex) are probably the strongest.

More big thumbs up for the original trilogy. Which, hmmm … available in eBook now, you say?

> If you don’t mind suggestions from complete strangers, I would start Lord Valentine’s Castle. It is a charming book

rrm (any relation to GRRM?),

We’re all friends here. And thanks for the suggestion!

> More big thumbs up for the original trilogy. Which, hmmm … available in eBook now, you say?

Not sure about the others yet, but I expect they can’t be far behind.