Stand back, comrades, the gloves are off. 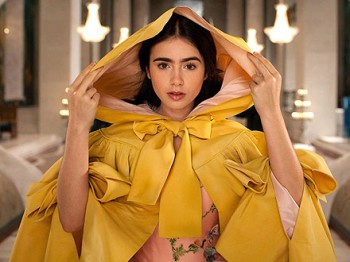 I hate this movie.

Unfortunately — and somewhat confusingly — I also love it.

Riddle me this: why exactly did Mirror, Mirror’s good king have to marry the wicked stepmother queen? Perhaps it’s because she’s so smartly played by Julia Roberts, but no: the reason given, in a sassy prologue, is that the king discovered certain things (martial skills) that he could not teach his daughter. Therefore, he had to marry anew, his first wife having conveniently died giving birth to Snow White.

Let’s stop right there. This is an example of what we Black Gate critics call GLOSSING OVER. In certain circles, it’s also called DELIBERATE OBFUSCATION.

The information that the king must remarry is presented so fast, and with all the confidence of a logical fait accompli, that we are supposed to ignore its hypocrisy, stupidity, and outright vapidity and quickly move on.

Well. This lil’ critic ain’t fallin’ for it.

Are you seriously going to tell me that it follows logically that if a widower decides he cannot teach a particular skill to his only child, he must not only remarry, but choose someone who knows nothing of that particular skill? In what way does this address the problem? 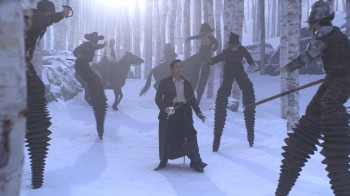 Answer: in no way whatsoever, and thus Mirror, Mirror (2011) proceeds from a logical fallacy.

And you know what that does, gentle reader? It raises my hackles. (I have six, by the bye, in matching sets of three.) And why does it raise said hackles? Because I strongly suspect that when some clever screenwriter has attempted the GLOSSING OVER gambit in the opening three minutes of a film, that he (or she) will very likely try it again. And again. And again.

Let’s be clear. Roberts is hilarious, and Snow White (Lily Collins) and Prince Charming (Armie Hammer) both do yeoman’s work flirting their way to a happy ending. Also, the movie is tartly amusing and looks terrific. Such gorgeous cinematography, especially inside the camp of the seven dwarves, ought not to be allowed except when framed and signed by Rembrandt. As for action and set-pieces, the marionette battle is especially delightful, droll but with a brisk sense of real danger.

Sadly, all that proves insufficient. I hate this movie anyway. 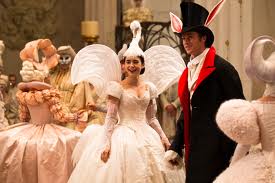 Why? For starters, who is this movie aimed at? Children? Surely not. The double entendres fly thick and fast. Everyone makes jokes about absent pants. One character, transformed into a cockroach, claims to have been “violated” by a grasshopper.

Even if one disregards the disguised foreplay (and possibly swordplay), the core issues are bland economics: the bad stepmother queen is bankrupting the nation by throwing wild costume dramas. Frankly, 20th Century Fox could have clothed most of Darfur’s real-world refugees for the cost of this flick’s set and costumes, but let’s leave that particular moral morass alone, shall we? If we stare too hard into the abyss, we might put poor amoral Hollywood entirely out of business.

Mi objection proximo: if the handsome prince and his marvelous baritone are from Valencia, then why doesn’t he speak Spanish, or at least wear the appropriate soccer jersey?

Next up, since when is winter not cold? These people wear short sleeves when it’s snowing.   Then they walk barefoot through snow, and guess what? When they’re outside and it’s frigid, we don’t see the steam of their breath. Why? Well, it could be magic, I suppose. Pixie dust and the like. Or it could be that the filmmakers were so hell-bent on “fairy tale reality” that they’ve used that reality as an excuse to be just plain sloppy. As in, let’s suspend not only disbelief, in the proper service of the story, but let’s also suspend those aspects of reality that might lend crucial credence to the narrative, and to the whole dramatic house of cards. (Which, incidentally, fall down frequently.) Bouncing dwarves on springs? Sure, why not? The kids’ll love it. Oh, but wait.  This movie isn’t aimed at the kidlets.

Surely it’s not aimed at adults. Aside from the fun of seeing Ms. Roberts in a dress the size of a military barracks, why should any discerning adult sample this particular (petri) dish? The stakes are neither as mythic as the traditional fairy tale, nor as wounding as standard adult dramatic fare. 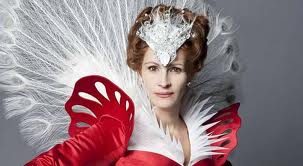 What, then, is going on here? And why am I being so harsh, so wicked-stepmothery in my assault?

Because I love this movie! And, as with myself, I want it to be better.

My real beef with Mirror, Mirror is its easy mockery, its casual insincerity, its post-modern tendency to reference fairy tale culture in place of actually taking the plunge and participating.

Yes, it might be tempting to defend Mirror, Mirror as an homage, but this would be inaccurate; it’s a cold-hearted send-up, a broadly self-aware, nudge-and-wink skim-the-surface exercise in fairy-tale-telling.

Entertainments as diverse as Kim Possible and The Incredibles trade on this same self-knowing, in-joke gambit, and obviously some do it better than others. My objection is not the style itself so much as the frequency with which it is employed. Sadly, films and television programming that rely on snarkiness and self-reflexive style are now the norm, not the exception.

What happened to plain old-fashioned straightforward story-telling? Story-telling, that is to say, that trusts in its material, that does not assume the audience will yawn and remark, “Been there, done that”? Fear, that’s what drives this brand of movie-making (and book-writing, and television), the simple and quite baseless fear that we, the children of the 21st Century, are so sophisticated that we cannot possibly be moved by a well-wrought story, well-presented. 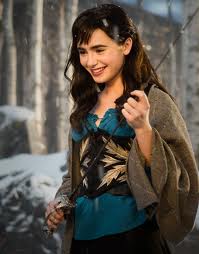 worth avoiding, but earned emotion is not. What’s the difference? Glad you asked. A sentimental storyline demands that audiences feel an emotion without supplying the dramatic legwork to help anyone reach that emotion. In deeper, better work, those emotions flow naturally because we empathize with the characters and their plight. Why? Because we recognize ourselves in those we follow on-screen (and in books, yes), and when those alter-avatars fail or fall, we fall with them.

This is what great dramatic art achieves: empathy. Compassion.

Mirror, Mirror never gives itself the chance to be art. It assumes, a priori, that it can’t possibly be great, and that it won’t generate real interest. Once that’s decided, the only place left to go is into the world of flippant dismissiveness. And so it does, headlong.

Cynicism and studied indifference are enemies of art; those who employ them while claiming to serve or create art court the devil.

“Mirror, mirror, on the wall, whose wisecracks are funniest of them all?”

Fact: in sketch comedy, jokes can be the main course. They can be downright priceless, even, but is that the chief stock-in-trade of the venerable fairy tale? In a story where we’re asked to root for someone, and to follow their (Joseph Campbellian) journey, surely the whole ought to be greater than the parts, and not the other way around. Yet Mirror, Mirror behaves as if the gags are at the center, like a Ben Stiller vehicle. But why? Surely Mirror, Mirror ought to be a vehicle for Snow White the story or Snow White the character, and not for Julia Roberts.

This is not to say that movies leave no room for satire. Satire is essential to a thriving, free 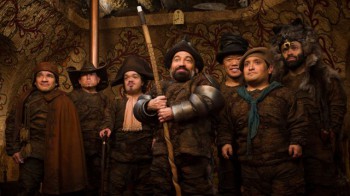 culture. But Mirror, Mirror is not a satire, since it mocks itself (and its form) without hoping to improve it. A true satire, stemming as it so often must from a sense of outrage, takes an essentially hopeful stance: it suggests that the current state of affairs could and should be better. Think Jonathan Swift, urging the English to eat Irish babies in order to stave off famine. Revolting, but with a higher purpose.

Nor does Mirror, Mirror pull the clever trick of full-bore deconstruction, which is what gives Monty Python and the Holy Grail so much bite. In the world of the Pythons, any given scenario is taken (kicking and screaming) to its logical conclusion. Comic deconstruction strips off the proverbial veil from convention; it insists, upon spotting a naked emperor, that not only does the emperor have no clothes, but neither does anyone else. Mirror, Mirror, meanwhile, doesn’t want to take fairy tales, not even “Snow White,” apart, it merely wants to poke it occasionally, like a rude child who can’t keep his hands to himself.

(Complete non-sequitur: what a waste of the estimable Mare Winningham, she who anchored the devastating Georgia (1995) and produced one of the best folk-rock albums ever made, Lonesomers. Ms. Winningham deserves better fare, and meatier roles.)

Well. I imagine someday I’ll meet the screenwriter and the director, and they’ll explain, with great confidence, that all their on-screen choices make perfect sense, and that I really must tremble in fear when Snow White is in (supposed) danger, then weep like a rainstorm for the (guaranteed) happy ending.

Sorry, no. And not because I’m a jaded hard sell. Quite the opposite.  I’ll cry at the drop of a 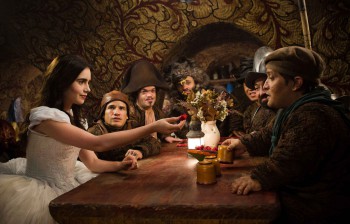 hat, or get excited about virtually any hero or heroine, provided those who pull the strings give me just one tiny boon: sincerity.

As for the Bollywood ending, well, I do believe that now I’ve seen everything.

I love this movie.

I hate this movie.

[…] For an example of another film for which I have Strongly Ambivalent Feelings, please see my long-ago review of Mirror, Mirror. […]