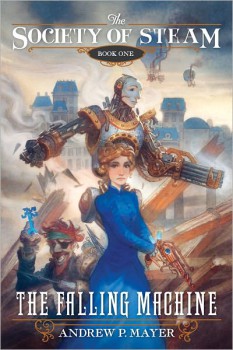 Imagine the  gilded age… but with superheroes and steampunk technology.

That is the central premise of Andrew P. Mayer’s Society of Steam trilogy, which just published its final volume in January. The books portray a world in which the brilliant inventor Sir Dennis Darby has brought together heroes to form the Paragons, a New York City group of adventurers that fight menaces to decent society. Among the heroes is the Automaton, an intelligent steam-powered construct of Darby’s own invention.

This alone would be enough of a premise for a trilogy of novels, but the first book in the trilogy, The Falling Machine (Amazon, B&N), begins by throwing this fascinating world into turmoil… by killing off Darby himself in the first chapter, leaving his student Sarah Stanton – forbidden by gender to become a hero in society – to take a stand and see that his vision of the future has a possibility to come to pass. The trilogy therefore is not about the Paragons so much as it’s about the Paragons facing their darkest hour… with an outcome that is far from predictable.

To think about the challenge facing Mayer in writing this series, consider that this would sort of be like if the first issue of X-Men began with Professor Xavier dying. The series is trying to depict the status quo changing, but also has to — at the exact same time — depict what the status quo was. It’s a tough balancing act and Mayer does a good job with it, though there are times where it’s a little uneven, particularly in the first book, which ends with several characters dying and the ranks of the Paragons devastated by their greatest challenge: the villain Eschaton.

The series focuses on Sarah Stanton, the young daughter of wealthy business tycoon and hero Alexander Stanton, known to the populace as The Industrialist. Though Sarah can barely even dream of adventure, due to her gender and station in society, she nevertheless is the only one willing to stand up when the Paragons turn on The Automaton out of fear that they can’t control it. Betrayed from within and manipulated from without, the Paragons fall, and only Sarah is in a position to recognize and fight against it… a fight that ends tragically for many members of the team, and for her. 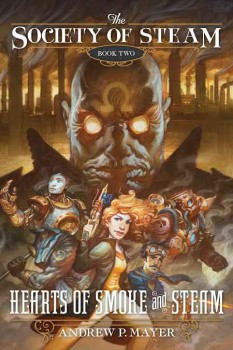 The second book of the series, Hearts of Smoke and Steam (Amazon, B&N), changes gears significantly (so to speak), picking up with Sarah living in hiding, while she tries to save Darby’s dream. While the Paragons took some major hits in the first book, the second book pounds them even more. Again, many people die, but new characters are introduced, such as the Italian inventor Emilio Armando. Readers are also given a better glimpse into the main villain and his minions, with some chapters even adopting them as viewpoint characters. This continues through to the third book, Power Under Pressure (Amazon, B&N), which does resolve everything and leads the reader into a new status quo.

The series is a fun read, with enjoyable storytelling, great action sequences, and a good theme. As with much of the steampunk I’ve read, I’d love to see a graphic novel or animated or CGI adaptation, and this certainly has enough plot going on to support such a narrative.

Still, there are some flaws in this series. I somewhat suspect that the author wrote the first book without fully understanding where the trilogy was heading, because there is a dramatic shift in focus as the books progress. The villains are, by and large, pretty one-dimensional, which makes their inclusion as viewpoint characters a bit strange. There is a brief period where there are some vaguely compelling arguments made in favor of Eschaton’s worldview, but these are quickly squandered because he is clearly a stark-raving lunatic who garners little sympathy. The novels do a good job of critiquing the social conventions of the era, so Eschaton’s attempt to confront and repair this could have been handled with far more nuance and sympathy. To return to my earlier X-Men analogy, the author could have given us a Magneto, but we are instead left with more of an Apocalypse.

Toward the end, the fight sequences also get a bit disjointed as the series progresses. A scene is told from one point of view, and then we rewind in time (without warning) so that the same scene can be given from another point of view. This narrative device wasn’t really used in the first couple of books that I recall, so its sudden appearance in the third book is jarring. 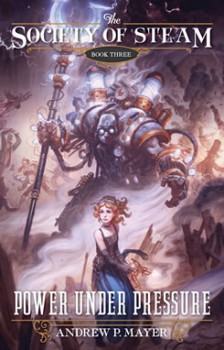 Also, the technology and science in the book becomes a bit muddled somewhere in the middle of the second book. The first book has some terms that are being dropped, such as “fortified steam,” which aren’t clearly defined, but that’s fine. This is steampunk, so we expect that. But by the second book, they’ve introduced “fortified smoke,” and it’s behaving in ways that no one understands, until it really reaches the point where the reader is left with the impression that no one – including the author – really understands how the steampunk science works anymore. If you’re going to enjoy the series, you’ve got to be in a mindset to let this slide.

Finally, I would be remiss if I didn’t mention the sheer volume of typos that made their way into these books. I got an advanced reading copy of Power Under Pressure, and this by far had the most problems of this type, but I read the final release paperbacks of the first two books, and there were many there, too. For some people, this sort of thing is like nails on a chalkboard, and I recommend that if you’re one of those people, you’d want to avoid these books.

All of those criticisms having been laid out, though, the world depicted by Mayer is a fascinating one. It is rich enough to warrant further exploration and his storytelling ability is such that I’d be willing to see what future books he produces (though would prefer more proofreading/copyediting rounds). The series isn’t a slam dunk, but for those who find the concept engaging, the tale will likely live up to your expectations … with a few rough patches.

Disclaimer: Complimentary copies of these books were provided by the publisher for review purposes.

Andrew Zimmerman Jones is a writer of fiction and non-fiction. He has been a finalist in the Writers of the Future contest and received Honorable Mention in the 2011 Writer’s Digest Science Fiction/Fantasy Competition. In addition to being a contributing editor to Black Gate magazine, Andrew is the About.com Physics Guide and author of String Theory For Dummies. You can follow his exploits on Facebook,Twitter, and even Google+.